Why Is It Easier to Copyright an Unhealthy Yoga Routine than a Healthy One?

You might wonder first how yoga, dating back thousands of years in India, can be copyrighted at all. (Not easily, as we will explain in a moment.) But the question we raise emerges from a very current dispute between two rival yoga studios. 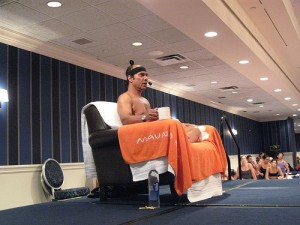 Bikram Choudhury is the founder of Bikram Yoga, a popular chain of yoga studios frequented by celebrities such as Lady Gaga and David Beckham. In Bikram Yoga classes, students enter a room heated to 105 degrees Fahrenheit to perform a set of 26 traditional poses and two breathing exercises. While you might think demand for this would be low, “hot yoga” has made Choudhury very rich. He has a villa in Beverly Hills, and a collection of more than three dozen Rolls-Royces and Bentleys.

Greg Gumucio is an example. Gumucio runs a rival hot yoga studio called Yoga to the People. In New York City, Bikram charges $20-25 per class; Gumucio charges $8. And Gumucio trains his own instructors. As a result, as the New York Times reported, he has recently been sued by Choudhury.

So what does health have to do with this lawsuit?  Choudhury claims that his yoga sequence, when performed as directed and at the correct temperature has significant health benefits – ranging from the alleviation of diabetes to multiple sclerosis and obesity. But a central feature of copyright law is that creations that have a function cannot be copyrighted. The more Choudhury’s health benefits are true, in other words, the weaker his claim to copyright is.

And that claim is pretty weak to begin with. The poses themselves are in the public domain – they have been practiced in traditional yoga for a very long time. It is nonetheless true that those who “select and arrange” public domain elements, like yoga poses, in an original way can obtain a “thin” copyright that gives them the exclusive right to that particular selection and arrangement. So Choudhury may have a valid claim that he can use to prevent others from exactly replicating his sequence. But this “thin” copyright cannot be used to prevent a rival from performing a sequence that is similar, but not identical. Mix up the order a bit, in other words, and Mr. Gumucio is on safe ground.

If Bikram Yoga’s advertised health benefits are accurate, however, even this thin copyright is probably unavailable. Functionality is the master concept that divides copyright (which covers art, literature, and other non-functional things), and patent (which covers new machines, processes, and other functional things). Choudhury claims that his sequence cures disease – this is clearly a claim of functionality. That would seem to rule out copyright.

But let’s face it: Choudhury may be exaggerating the health benefits of hot yoga just a bit to drum up business. Should he nonetheless be able to claim a copyright on the ground that the sequence actually does not do what he says it does?

This isn’t a far-fetched question – Choudhury’s lawyers are very careful to downplay hot yoga’s disease-curing claims in their legal papers.  But if Choudhury sells his hot yoga on the basis of its curative power, he should be held to what he says. And if the sequence is functional, the copyright claims fall apart. And once that happens, the only option remaining for Choudhury is patent, and for several reasons that isn’t going to happen (perhaps the simplest is that hot yoga has been offered in the market for years, and is therefore not “novel” in the way the patent law requires).

Claiming hot yoga makes you fat and sick probably wouldn’t be a great business strategy. But it would make Choudhury’s litigation strategy a lot easier.

A friend of mine, who is a Bikram Yoga instructor and acquaintance of Mr. Choudhury, explained to me recently that Choudhury only files suit when someone else attempts to certify teachers in his particular style of yoga. Mr. Gumucio did not run afoul of Mr. Choudhury just for offering less expensive classes (after all, Mr. Gumucio is certified by Mr. Choudhury to teach classes, and can therefore teach and charge whatever he wants). However, Mr. Choudhury reserves the right to certify instructors in "Bikram Yoga" to himself. This is not distinct to yoga; martial arts and even folk dance organizations have similar restrictions and controls as to who is certified to teach and to certify teachers. Or in a more accessibly commercial example, Coca Cola certifies individual bottlers to bottle Coca Cola products, but that doesn't automatically grant that bottler the right to certify other bottlers.

That right isn't derived from the copyright. Coke doesn't have any copyrights in its products, just trademarks in the name and, notably, the trade dress of its bottle. Furthermore, it probably has an agreement with its bottlers that would preclude them from using its soda without their brand.

Choudhury can't just sue someone for certifying teachers in his style. The Copyright Act makes it explicit that systems and methods are not protected. He would have to have a copyright to the sequence (which is problematic for the reasons above), a contract with the offender (which is your martial arts and dance example), or some other kind of trademark that is being violated.

This reminds me of the suit filed by the authors of "Holy Blood, Holy Grail" against Dan Brown after "The DaVinci Code" became a smashing success. The authors had always presented HBHG was as a work of non-fiction, which meant they were suing Brown for incorporating historical facts into a novel.

I've often wondered if there are any laws forcing people to take one coherent legal stand. If someone were to say, investigate Choudhury for false advertising, would the legal cases be tied in such a way as to allow briefs filed by Choudhury in one case to be used as evidence in the other?

There is a doctrine called "judicial estoppel." I can't speak for other jurisdictions, but the doctrine is alive and well in California. As stated in Swahn Group v. Segal (183 Cal.App.4th 831): "The doctrine of judicial estoppel precludes a party from taking inconsistent positions in separate judicial proceedings [and] is invoked to prevent a party from changing its position over the course of judicial proceedings [if this change will] have an adverse impact on the judicial process... Judicial estoppel is ‘intended to protect against a litigant playing “fast and loose with the courts.' ” So, if Mr. Bikram asserted a position in one court (note: he'd have to be the asserting party), this assertion could be used against him if he asserted the opposite position in a separate court case.

If the Copyright system needs anything it is stiffer penalties for making untrue Copyright claims. If you make a copyright claim, and lose, you should be automatically subjected to treble damages for the cost of defending the claim from the wrongly accused person.

I think this is particularly apt in this case. Bikram has been able to put many small yoga studios out of business simply because legal costs were too high for them to answer Bikram in court. The high cost of litigation means larger companies can file frivolous lawsuits based on copyright claims that they would never actually win, simply because smaller companies can't afford to defend themselves.

An alternative view would be that we should be pleased to see that copyright isn't offering an end-around on the patent system. Copyright protection is already very lengthy (and Congress continues to make it even more lengthy).

Imagine a drug company trying to protect the contents of its drug by claiming a copyright on the pill's label. We'd be outraged.

Clever discussion, but a federal judge in San Francisco rejected that patent-copyright analysis in 2005 and ruled for Choudhury: "The court, while recognizing, and even agreeing that application of law of the compilations to yoga asanas appears to violate the spirit of yoga, has been unable to locate any authority that precludes such application. … Choudhury’s copyright protects only the arrangement of asanas as specifically described in Choudhury’s book…. Choudhury may properly enjoin exact or near-exact duplications of his yoga sequence, if the routines taught by Plaintiffs are “substantially similar” to Choudhury’s and, thus, infringing…..At trial…the court would find, at a minimum, that exact duplication of the sequence infringes.”

Judge Hamilton also reviewed high court rulings to articulate the functional-patent /expressive-copyright issue raised by our excellent freakonomics: "Thus, copyright provides that while functional and public domain material remains free for all to use, a compilation of that material may nonetheless qualify for copyright protection if the compiler can demonstrate a sufficient level of creativity in the selection and arrangement of the elements of the compilation law. "

"The court, while recognizing, and even agreeing that application of the law of compilations to yoga asanas appears to violate the spirit of yoga, has been unable to locate any authority that precludes such application. Therefore, if the trier of fact determines that a sufficient number of the individual yoga asanas are arranged in a sufficiently creative manner, copyright protection for the yoga sequence would be available."

"Here, Choudhury claims that he arranged the asanas in a manner that was both aesthetically pleasing and in a way that he believes is best designed to improve the practitioner's health. At a minimum, this creates a dispute of fact on the issue of whether sufficient creativity exists in the Bikram yoga routine so that copyright protection attaches, and thus summary judgment on both copyright validity and copyright invalidity must be denied."

"Assuming copyright protection is found at trial to attach to the Bikram yoga sequence, the court would find, at a minimum, that exact duplication of the sequence infringes."

"If the Bikram yoga sequence can be copyrighted, any copyright that exists is necessarily considered 'thin.' In other words, Choudhury's copyright protects only the arrangement of asanas as specifically described in Choudhury's book."

It helps to put those statements in context.

Back when copyright laws made sense it was ruled that recipes are not covered by copyright. How is this sequence of poses different from a recipe?
--
JimFive

H- This is entirely different and falls into an entirely different section of the law. Software is not part of an old, traditional,m thousand year old practice in the same way that letters of the alphabet we use cannot be copyrighted, nor even the entry of a new word into a current dictionary. You need to read about the law governing a patent, Then it will make more sense. If you read about patent laws, you will understand that it's not so much copyright, as trade marks, that make it possible to "own" software.