The Economist features an interesting chart this week, showing the correlation between a country’s wealth, and the average amount its citizens spend on Christmas gifts. Note the two outliers, the Netherlands and Luxembourg. 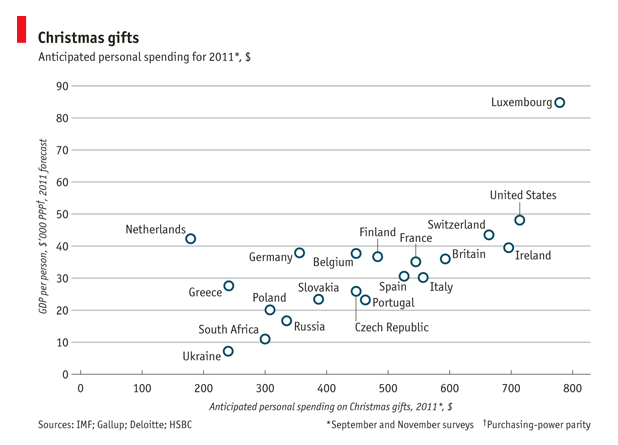 Despite their considerable wealth, the Dutch have clearly maintained their minimalist austerity chic. Not the case in Luxembourg, which has the highest GDP per capita in the EU, and the third highest in the world. So, while you may get a pair of wooden shoes for the holidays from that Dutch relative of yours, that Luxembourgian uncle stands to be much more generous.

It’s also worth noting America’s position. Despite considerably less per capita wealth, we appear to be spending only about $70 less per person than the Luxembourgers. Interesting also that despite their crushing debt woes, the Irish are big givers, at least compared to their PIGS companions: Portugal, Greece and Spain.

You omitted the comments in the Economist posting:
- the first of which noted that the Dutch also do a lot of gifting on December 5, their Sinterklaus day, so of course the figures of what they give for Christmas are skewed.

And Christmas spending doesn't even have any positive effect on the economy overall: http://andreasmoser.wordpress.com/2010/12/23/economics-of-christmas/

Regarding Ireland, the debt concerns are a relatively new thing, while the drift towards spending lots at Christmas built up over many years. Cultures are not necessarily very responsive to economic climate I guess.

Given that trend, you would expect the Luxembourgers to be giving ~$1250/person, rather than only ~$800/person.

Since only 10 people live in Luxembourg, that country's results are bound not to be statistically significant.

Why is GDP on the Y-axis and spending on the X-axis? Seems backwards.

Completely agree. The message I get out of this are that both the Dutch and Luxembourgians are stingy when it comes to holiday gifts, in relation to how much money they have at their disposal.

Interchanging the axes would show that very clearly.

Treating the Netherlands as an outlier, you most probably ignore the fact that the Dutch spend most of their gift money on Sinterklaas (Saint Nicholas), whose birthday is celebrated on December 5th and is THE children's event of the year. Therefore, Christmas spending concentrates on food, as the majority of Dutch families have no money left to spend on gifts.

If I'd read this post prior to posting mine, I wouldn't have needed to post. Nice work Marcel :)

I believe the Dutch austerity measures have played a role in the Netherlands being in the bottom. However, considering the modern day Santa Claus was derived from the Dutch, what might this say about the adopters of said figure? Might the Dutch simply be keeping with tradition in celebrating St. Nicholas on December 5-6 and buying presents mainly for children instead of all family/friends? That would certainly keep spending lower than other countries...

Luxembourg is always destined to be an outlier, it's essentially a banker city. Whereas the rest of the countries have within them plenty of variation, Lux. is relatively uniform.

And while I'm ranting, I feel the axes should be switched. /rant

All families with kids in The Netherlands give presents on Sinterklaas (Dec 5), not Christmas!
I am disappointed that this "research" doesn't take this into account. It is not a secret or anything.

Oh and we don't wear wooden shoes. In fact you can only find these in tourist shops!

Believe me, there often is little "dutch minimalist austerity" involved in the dutch Sinterklaas festivities, which (as a previous reader pointed out) falls just before Christmas, and is the main gift giving celebration.

My initial comment, the first one posted, noted that the Dutch Sinterklaas explanation had been mentioned as the very first post on the ECONOMIST web site, where this article came from.

I should have been clearer. I meant to be critical of Levitt or Dubner. They should not have put up this article without also including some of the info from the posts on the ECONOMIST site, which provided such explanations.

A small note, orginaly in the Netherlands no gifts were given at christmas, this was done at sinterklaas. The last 20-25 years there is a shift towards christmas, however families with small children always will have their presents as sinterklaas. This will put the numbers above in a different perspective because the dutch spent their money in 2 shifts in december (5 sinterklaas and 25 christmas december)

The reason the Netherlands spends so little on Christmas gifts, is because the children get their presents at 5 or 6 December, at Saint Nicolas celebration. Christmas is about family and friend dinners.

The reason the Dutch...SanterKlauss..what? That's already been commented on 18 times?

A possible reason for Netherlands being a outlier could be another holiday in December.

St. Nicolaus day on Dec 5th is celebrated also with significant gift-giving (while remaining Europe only gives small things e.g. chocolate). Since there is only a gap of some weeks between St. Nicolaus day and Xmas day, people may generally give less to those who have already received a "big" gift for St Nicolaus.

The question is if St Nicolaus spending is included in the anticipated Christmas spending data.