David Stern ran roughshod over owners during the recent NBA lockout negotiations. He was willing to levy stiff fines for any public comments that might undermine an image of management unity.

But the league’s power to control dissident owners possibly changed on Nov. 14, when the union representing NBA players formally dissolved. The league treated dissolution as a bad faith bargaining ploy by the players to gain bargaining power. You see, sports leagues can engage in collusive conduct that would otherwise violate the Sherman Antitrust Act – so long as the collusion takes place as part of a collective bargaining agreement. By disbanding the union, the players were threatening to expose the league to massive antitrust liability.

The league treated the players’ dissolution as though it had no impact on its control of team behavior. But imagine for a moment that one of the team owners took the players decertification seriously. 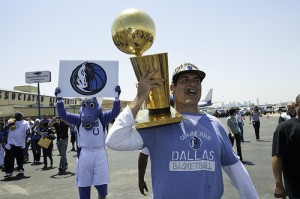 Imagine that say, Mark Cuban, owner of the Dallas Mavericks, treated dissolution as an opportunity to compete for unsigned players unbound by league restrictions – beginning with the restriction that he wasn’t allowed to communicate with players.

Even without a collective bargaining agreement, a sports league can establish and enforce (under the rule of reason) many rules, including the rules of the game itself. But without the immunizing effect of a collective bargaining agreement, it would be almost impossible under the Sherman Act for a league to run a draft which preordains that only a single team can compete for the services of an individual player.

Breaking ranks with Stern would be a high gamble. The league would immediately sue and Cuban would risk losing his franchise.  But in another year when there was a transcendent talent coming out of college or a big-name free-agent, it might have been a risk worth taking – especially in a not-so-distant past when Cuban might have liked the idea of sticking it to a commissioner who had so readily fined Cuban in the past.

By locking up some free-market talent during the period of dissolution, Cuban or another owner might enhance his own bargaining power when the league and the players met to settle the dispute and recertify the union. Breaking ranks and snapping up some free agents (a la the European league contracts with Ricky Rubio) might have even put pressure on the league to end the lock out sooner. But flouting (anti-competitive) ownership rules would also risk destroying the NBA as we know it. If other owners followed Cuban’s suit, it might have been hard for the league to put the parity genie back in the bottle.

While the “decertification as owner opportunity” idea is a fun thought experiment, I’m not surprised, given these risks, that none of the owners were willing to roll this die.

Stepping back, we can see the antitrust exemption as an important legal subsidy to unionization. Team owners want their players to be unionized because “collective bargaining” law allows producers to come closer to colluding on things like merchandise prices.  Indeed, a truly frivolous idea (in this season of writing outlandish issue-spotter final exam questions) would be to consider a professional tiddlywinks league headquartered in Detroit that had a players’ union with a duly ratified collective bargaining agreement. Just like the NBA and NFL, the collective bargaining agreement would touch upon how merchandise revenue would be shared – with the unusual feature that the merchandise would be new cars. Each team would be owned by a different car company and fans could display support for their favorite team by buying an automobile bearing their favorite team’s name (Ford, Buick, etc.).