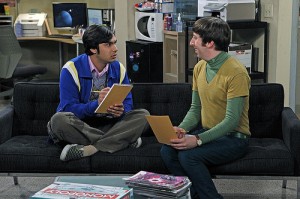 That’s the (tenuous) claim of this Guardian article:

According to the Higher Education Funding Council for England (HEFCE), there was a 10% increase in the number of students accepted to read physics by the university admissons services between 2008-09, when The Big Bang Theory was first broadcast in the UK, and 2010-11. Numbers currently stand at 3,672. Applications for physics courses at university are also up more than 17% on last year. Philip Walker, an HEFCE spokesman, said the recent spate of popular televisions services had been influential but was hard to quantify.

FWIW, we’ve been told by a lot of youngish readers that Freakonomics and SuperFreakonomics led them to major in economics. John J. Siegfried addressed this possibility in a Journal of Economic Education paper called “Trends in Undergraduate Economics Degrees, 1991-2010”:

As I reported last year (Siegfried 2010), the first year that might have revealed a “Freakonomics effect,” namely, acceleration in undergraduate economics degrees* powered by some of the millions of people who read Levitt and Dubner’s best-selling book, was 2008.  Freakonomics was first published in 2005.  Most undergraduates who earned a bachelor’s degree in 2007-08 declared their major in the spring of 2006, so many of them (or their parents) would have had an opportunity to read Freakonomics by then. The 2009 and 2010 numbers continue to support this hypothesis.  During the three years after the publication of Freakonomics, that could have had an impact, economics degrees rose 16 percent.  Over the same period, total undergraduate degrees awarded increased by only eight percent.  Any effects on economics degrees that may have been stimulated by the financial crisis will not be apparent until data for 2011 are available.

There are of course, many (many many many!) other factors to consider, as there are with the Big Bang/physics theory. For all we know, the rise in economics degrees is completely orthogonal to Freakonomics and in fact our books may have alerted some students (and their parents) to the discipline’s depravity and kept in check what otherwise might have been an even greater surge in economics students!

* (Here is a look at the long-term trend in economics majors; note the rise of late but, just as interesting, the steep decline in the early 1990’s.)