Even if they haven’t heard the term Scramble for Africa, most people know that something went wrong when the continent was divided into nation states by European colonial powers.

Some economists, however, have taken the time to quantify the destructive nature of Africa’s national borders. Authors Stelios Michalopoulos and Elias Papaioannou have released a new working paper showing how arbitrary border decisions have affected war and civil unrest in Africa, particularly among split ethnic groups and their neighbors. Not surprisingly, the length of a conflict and its casualty rate is 25 percent higher in areas where an ethnicity is divided by a national border as opposed to areas where ethnicities have a united homeland. Examples of divided (and conflicted) groups are the Maasai of Kenya and Tanzania, and the Anyi of Ghana and the Ivory Coast. The conflict rate is also higher for people living in areas close to ethnic-partitioned hot-spots.

We examine the long-run consequences of the scramble for Africa among European powers in the late 19th century and uncover the following empirical regularities. First, using information on the spatial distribution of African ethnicities before colonization, we show that borders were arbitrarily drawn. Apart from the land mass and water area of an ethnicity’s historical homeland, no other geographic, ecological, historical, and ethnic-specific traits predict which ethnic groups have been partitioned by the national border. Second, using data on the location of civil conflicts after independence, we show that partitioned ethnic groups have suffered significantly more warfare; moreover, partitioned ethnicities have experienced more prolonged and more devastating civil wars. Third, we identify sizeable spillovers; civil conflict spreads from the homeland of partitioned ethnicities to nearby ethnic regions. These results are robust to a rich set of controls at a fine level and the inclusion of country fixed effects and ethnic-family fixed effects. The uncovered evidence thus identifies a sizable causal impact of the scramble for Africa
on warfare. 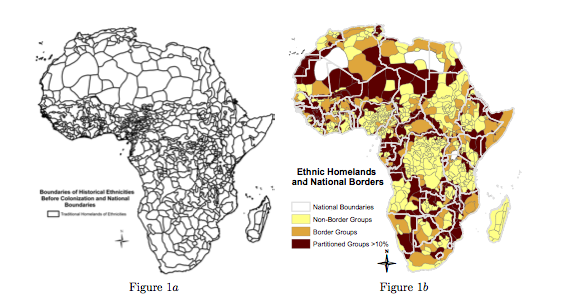 Using a 1959 ethnic homeland map from ethnolinguist George Peter Murdock, the authors studied African conflicts from 1970 – 2005 (the “post-independence period”) and found that “civil conflict is concentrated in the historical homeland of partitioned ethnicities.” Colonial powers paid attention only to size and water — everything else that defines a nation state as we know it was disregarded. In short, the arbitrary borders of an entire continent have caused untold bloodshed and misery that could have been avoided. The authors conclude:

The uncovered differences in the probability of civil war between partitioned and non-partitioned groups becomes more dramatic when viewed in light of the fact that these two groups of ethnicities were socially, culturally and economically very similar in the eve of colonization and at the time African independence.