What Makes a Rogue Trader Tick? A Q&A with FT Columnist John Gapper 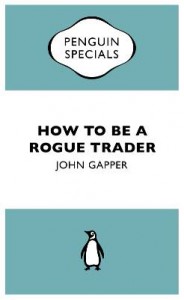 The rogue trader is a recurring character in the story of finance over the last 20 years. This is the guy who makes secret, unauthorized bets with his bank’s money, driven by some seeming combination of inadequacy and a huge appetite for risk, and abetted at times by an amazing lack of internal controls.

The deeper he goes, the harder he has to work to conceal his deception until one day, it inevitably comes crashing down. The bank loses billions, the trader (sometimes) goes to jail. The story is repeated every several years. The latest version broke in September when UBS announced it had lost more than $2 billion as a result of rogue trader Kweku Adoboli.

In his new e-book, How to Be a Rogue Trader, Financial Times columnist John Gapper explains why this story has become so familiar over the years. As he puts it, the rogue trader is a species of sorts within the world of finance, a special breed with certain behaviors and characteristics that are consistent through time. Gapper delves into evolutionary biology and the research of Daniel Kahneman to better understand the nature of men like Nick Leeson, Joe Jett, and Jerome Kerviel.

Gapper was nice enough to answer some of my questions about his new book.

Q. You start with a discussion of evolutionary biology to examine the motivations of a rogue trader. Explain that.

A. I found the research fascinating, these evolutionary studies of the ways that species adjust their behavior when foraging for food. When they’re comfortable, they behave with risk aversion — they’ll go to the place that is the most reliable, even if it doesn’t offer the best returns. But when their survival is threatened, they will go to the riskiest places.

Q. You also spend a bit of time discussing the work of Daniel Kahneman. He’s considered a bit of a god around here. Were you surprised at how much his theories applied to the behavior of traders?

A. The Kahneman work is classic in the way that it explains how we react to gain and loss. It did strike me, the degree to which the behavior of traders falls in line with his work. They are hungry in a very basic sense. Kahneman talks about how moving the reference point changes people’s attitude to risk. If you look at a trading floor in those terms, you’re setting up an incentive system so that traders are eager to take risks.

Q. The bonus system is the main driver of that?

A. Exactly. For Kahneman, the reference point is the point at which you switch from risk aversion to loss aversion, the point at which you begin to take irrational gambles. The bonus system sets it artificially high; it’s not that you’re in a situation where you won’t be getting money, it’s about being in a situation where you might get less of a bonus than the year before. It’s perceived as a financial loss, but also a status loss. And traders feel the loss of status very keenly.

Q. Part of this reference point is that you have to be made uncomfortable to switch to loss aversion. It seems that a lot of these rogue traders are in some way feeling uncomfortable about their status in the world of finance to begin with. It’s not really about whether they’ve lost money, as it is that they feel inadequate, yeah?

Q. And the path to catch up is a very narrowly defined one.

A. It is, and you don’t have many shots at it either. If you don’t prove yourself as a trader, it can be a very unforgiving environment.

Q. You also write about how the banks where these guys tend to pop up are a bit roguish themselves.

A. There really is this parallel between the individuals and the institutions where they work. The one thing that seems to bind them together is that these banks are often outsiders themselves, they’re not among the elite investment banks, they’re not typically in the first tier of trading operations. Many of these European banks like UBS and Societe Generale wanted to break into Wall Street, where it was a higher status, higher margin business. And they perhaps didn’t have the basic controls in place, like a Goldman Sachs may have, to account for the increased risk they were taking on.

Q. A lot of these guys started in the back office, which gave them an advantage in pulling off their deception, yeah?

A. Right. Many of them started in the back office settling other people’s trades, which gave them an understanding of how the system works and how to manipulate it. It’s quite striking actually that in a lot of cases, how simple it was to evade the risk controls of a bank. They’re often balancing trades with fictitious positions so when the risk controllers looked at what they were doing, it looked like it was all balanced, yet one side was fake. It’s amazing that most of these guys weren’t caught much sooner. There are all sorts of ways they could have been checked against. Cash should be coming in and it’s not. It’s remarkable that 15 years after Nick Leeson and Joseph Jett, we’re still seeing the same sorts of deception being used and working for long periods of time.

Q. It takes an incredible amount of effort to pull these deceptions off, right?

A. Absolutely, and for the most part, these guys are  really clever and creative people. They have to be able to pull off this immense deception, where they’re able to conceal such large positions. But really, it’s this huge sense of loss aversion that ends up driving them, which takes a toll. These guys are going home feeling incredibly bad, on top of the strain of having to conceal what they’re doing. I often wonder how these guys go on for as long as they do. Nick Lesson went on for two years. They’re almost like the outliers on the bell curve in that way.