Why the NBA Players Keep Losing to the Owners

The following is a guest post by David Berri, a Professor of Economics at Southern Utah University. He is also the lead author of Stumbling on Wins, the general manager of the sports-economics blog Wages of Wins, and is a frequent contributor to the Freakonomics blog.

Why the NBA Players Keep Losing to the Owners 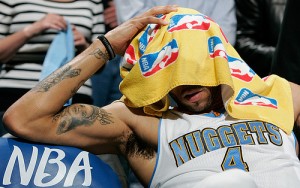 In the past couple weeks I have written about labor negotiations in the NBA and the recent labor agreement in Major League Baseball.  Now that we have agreements in both sports, thanks to the new NBA deal, I would like to address why the two unions involved in these negotiations have historically achieved such different outcomes.

Let’s begin with how the outcomes are different. In the NBA we see:

Furthermore, this latter cap has been reduced from around 57 percent to about 51 percent of Basketball Related Income (or BRI) by the latest agreement. In sum, salaries in the NBA are clearly restricted, and the latest agreement increases these restrictions.

In contrast, baseball players do not have a cap. And that means:

So how come the baseball players negotiated such a sweeter deal? And why can’t the NBA players’ union stop the owners from using players’ money to solve the owners’ problems? One possible explanation can be found in the NFL. Though the NFL is the most successful professional sports league in North America, the players have generally done poorly in negotiations with owners. NFL players not only face a very hard payroll cap, their contracts are not even guaranteed. (See our podcast, “Billionaires vs. Millionaires” for more).  Mike Leeds and Peter von Allmen – in their textbook on economics and sports – offer a simple explanation for what we see in football.

Some NFL players are clearly stars who are likely to play for many years (i.e. Tom Brady). The majority of players, though, are not stars, and face fairly short careers, 3.5 years on average in the NFL. Consequently, the non-stars are not willing to hold out for a much better deal, since their window is so short, and whatever extra benefits gained would likely not accrue to them as much as to the select star players.  In other words, NFL players never have much leverage in negotiations because most players are not willing to shorten their careers further by withholding their services.

Baseball players, however, have historically been willing to hang together and walk off the job. And one example might illustrate why baseball players are different. In 2002 (the last time baseball had a difficult labor negotiation) David Ortiz was 27 years old and had yet to hit more than 20 home-runs or log more than 500 at-bats in a single season. In other words, he was not considered a star. The next season though, Ortiz hit 31 home-runs for the Boston Red Sox and finished 5th in the balloting for MVP in the American League. Across the next four seasons, Ortiz always finished in the top four for MVP and always appeared in the All-Star game. In sum, Ortiz was transformed from a player who was not considered an integral part of the Twins to a star for the Boston Red Sox.

The Ortiz experience illustrates a key difference between football and baseball. In the NFL, if you haven’t made it by the time you’re in your late-twenties, chances are you’re not going to become a breakout star earning All-Pro money. But in baseball, that Ortiz story is more likely to happen. Therefore, even your average players are more inclined to reject any plan to restrict earning power – especially the earning power of stars. Also, baseball players have on average a bigger window of playing time than do football players. The average career for a major leaguer is 5.6 years. NBA players face an average career of 4.8 years, right in the middle of the two.

So is basketball more like football or baseball? It appears it is much more like football. As noted in Stumbling on Wins, NBA players peak around their mid-20s.  So by the time an NBA player is 27, he is generally past his peak. And if he is not a star at that point, just like in football, it is highly unlikely he is ever going to be a star.

In other words, most of the players on the executive committee of the union– like Derek Fisher, Maurice Evans, Keyon Dooling, Roger Mason, James Jones, Matt Bonner, Etan Thomas, and Theo Ratliff (i.e. everyone on the committee not named Chris Paul) – know that no matter what they do, they will never be an MVP candidate. So when the owners ask the players to agree to a deal that restricts the earning power of stars, most members of the union have a tough time sacrificing (i.e. holding out) for a deal that leaves star pay unrestricted. Conse
quently, the NBA is the only sport with a cap on individual salaries. So while LeBron James is probably worth more than $30 million to his team, the cap on individual salaries holds his pay to less than $20 million.

In sum, the NBA owners are able to divide and conquer the players. Since the players in the NBA have different career prospects, they are unable to stay unified. So it is not surprising that over the past 30 years the players’ union in the NBA has agreed to a payroll cap, a cap on individual salaries, and with this last agreement, a clear cut in pay. And because the NBA will remain a league where most players will never be stars, we can expect NBA players in the future to keep losing when it comes to negotiations with the owners.