Typo or Biggest NFL News of the Year?

In today’s Wall Street Journal, Jared Diamond (not this 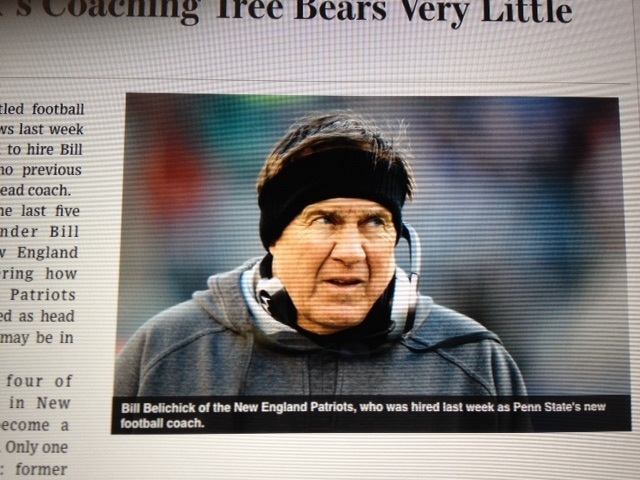 That’s not quite right. The Bill from the Patriots who was hired by Penn State was the Patriots’ offensive coordinator Bill O’Brien, as Diamond’s article makes clear in the first paragraph. Belichick is still very much the head coach of the New England Patriots.

As I type this (8:16 a.m. ET), the caption is still incorrect on both the web and iPad editions. (No caption appeared in the print edition.) I assume it will be fixed soon; perhaps it will be by the time this post get published.

I feel bad for the person/people (probably a copy editor) who made this error. Anyone who has ever published anything has been there, and it’s no fun. But it did make me wonder: in which newspaper section are the most errors of this type made? Often, editors and copy editors are asked to edit articles that fall outside their area/s of expertise.

If I had to guess, I’d say that sports articles are especially susceptible to this kind of error, given the huge amount of specialized language and knowledge in sports, especially weighed against the fact that a lot of otherwise very smart people know nothing about sports.

And if you think I am blogging about this unfortunate error in order to distract myself from the Steelers’ very ugly loss yesterday, you are right. This season was much tougher than the team’s 12-4 record would imply. Congrats to the Broncos and especially Tim Tebow, who went all Football Freakonomics on the Steelers (but to be fair, he also had a pretty good second quarter).

Actually, I'd guess that fewer errors of this sort occur in the sports section precisely for the reason you give. The information is specialized, yet so checkable by even the lowliest intern with internet access, that it's less likely the uninformed would be editing it. The business and political sections are less concrete than team rosters, games statistics, and media guides. That leads to ambiguity, conflicting sources of information, and hence errors (as well as repetition of errors).

Science articles are notorious (to me at least) for the frequency of sentences that are complete rubbish. I'm sure it's highly correlated with actually having a science editor or not.

Political ads and publications contain the most errors of fact and/or omission by at least an order of magnitude greater than any other print media.

At the last newspaper I worked at, we accidentally printed a photo cutline that said that Deion Sanders had a "bulging dick" in his back rather than a "bulging disc"

In our paper, it seems like the ads had the most typos, but that was probably because we had so many local businesses who produced their own "camera ready" ads for us to use.

I do not understand how any errors get published since all should be double checked prior to publication,Blaming lack of time is rubbish. . As an RN, if I give an incorrect med., stating " I did not have time to look it", will not do my patient any good. Know you genre!
Secondarily, the Steelers did have a very ugly loss yesterday. A comeback in the 4th quarter that was smoothered with one terrific running pass. The Steelers are a better team than that and they did could not prove that on Sunday. Congrats Denver.

It's ironic that a post complaining about typing errors has so many mistakes itself! Glass houses etc.

Who hasn't ever got a wrong Bill?

I would imagine either the sports page or the front page, mainly because (based on my admittedly slight knowledge of the newspaper biz) those two sections have the latest closing, with headlines & captions often being written by interns at 2am. The other sections are written, fact-checked and laid-out earlier by a wake awake day shift.

"Belichick's morals would fit right in at Penn State" was my first ungracious thought at reading this.

So my guess is maybe the copy person was being intentionally snarky.

(I'm a Bills fan--don't talk to me about New England)