Reflections on Visiting an Indian Slum

I recently visited India for the first time, spending a grand total of 30 hours there.  During that time, however, my experiences ran the gamut.  I spent the day in the Zakhira slum in New Delhi, and then just a few hours later, enjoyed a sumptuous dinner sitting next to former Australia Prime Minister John Howard, his wife Janette, and other luminaries. 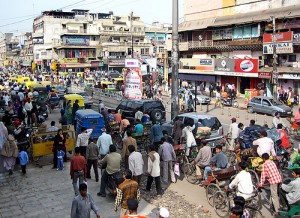 My first impression of India was that the chaos on Indian roads was beyond belief: people walking and riding bikes on what appear to be freeways, motorcycles with three riders, open trucks crammed with people, the constant din of honking everywhere by everyone. On top of that, the people driving me never seemed to know how to get anywhere. It took over an hour to get from the airport to my hotel, a seemingly endless series of turns (including numerous u-turns) and my driver rolling down his window and yelling for directions at nearly every stoplight.  I was surprised when the return trip to the airport, with a different driver, took only 20 minutes and was nearly a straight shot.  I will say, however, that I saw only one cow on the trip.

The Zakhira slum is wedged between two sets of railroad tracks that run in parallel maybe 100 yards apart.  As we cross the first set of tracks to enter the neighborhood, my first impression is how well dressed everyone is.  Not fancy, obviously, but not dressed any worse than I am.  This seems incongruous, given the huge piles of garbage along the railroad tracks, the smoldering fires, and the powerful stench.  My guide and translator Shayak (whom I will write much more about soon), tells me that every few months people from the railroad company come by and take the garbage away using donkeys, which I don’t really understand, but I don’t bother to question.  There is a pile of diarrhea just off the path we are on, although it is the only sign of human excrement I will see on the visit, despite the fact there is no plumbing.  I ask Shayak where people go to the bathroom.  Shayak tells me that there is an area further down the tracks where they “take a dump.”  If we were to go near there, he tells me, I would vomit.

Why isn’t there single page mode? Doesn’t everyone use instapaper/read it later/readability?

Welcome to India, but please do not make any quick calculations by just visiting only some selected areas. If you do want to get the real taste you have to look also some other places which will make you feel the real essence of life here.

Hope you enjoy it and feel the real taste of INCREDIBLE INDIA!

so then, you have to go through an area of vomit to get to the defecation area?

30 hours eh? I think looking at India through your eyes and perspective would be interesting, but more time is required. I have travelled to India quite a bit for work recently, after a long hiatus from travelling there for family. After you stare at the chaos for a while and get comfortable with it, you will find countless systems and patterns, even in the apparent anomie of the traffic. There is a logic to the swirling and blending of noise, sound, bodies and colours. A society that is thousands of years old certainly has ecosystems with laws and patterns, even if they are not readily apparent.

I have been to India twice and my sense is that the cities have perhaps 10 x the number of people that they were designed for.

India is Malthusian at the level of the poor I think. My suspicion is that little is genuinely known about the life expectancy, birth and death rates of the teeming, impoverished masses. It just seems that the impoverished masses live outside of any official system and I cannot imagine that when someone is born or dies in the slum, officialdom will ever find out about it.

How then could any national statistics ever be honestly known? Am I wrong? Does anyone know if demographic data from third world countries has any accuracy?

I thought India a Malthusian proposition for some time, until I got into it deeper. Despite the apparent lack of organization, local communities do indeed maintain detailed family records, demographic information and other methods of population tracking. The notion of teeming, impoverished masses certainly seems accurate, but even the random beggar or streetside child busker is part of a larger, systematic network where their value is part of a larger known equation. Pulling the data together may be difficult in many cases, such as with cadastral and property ID efforts, but usually people on the ground know what the scoop is.

What would an economist say about someone that spends a wad of money and two days travelling to/from someplace new (to him), exotic, entertaining, fascinating, beautiful, educational and both modern and ancient and then stays for only 30 hours?

That said economist was probably on a buisness trip and not there to vacation?

Interesting views and insights for a truly short trip. Make some time and go back. Did it occur to you that the contrast in property and wealth are as great and so evident as I noted? I recall sitting in one of the old black and yellow Ambassador cabs, a rickshaw to one side and a white neat Rolls Royce with a guy wearing a matching white turban on the third lane. Not to mention the number of those walking on the side. I had no camera but that perhaps would be the picture of the year.

If people stop thinking of the US as a non-profit organization and actually develop our programs to create a financial return instead of the democrat policy of hobbling the US any time we get too far ahead of the rest of the world. (The secrets of our success are not really secrets at all. The ability to stand in a line is a pretty small thing but anytime the people can't do it you are sure to find a 3rd world country.) Take DARPA and NASA for instance, both are sitting on some of the best patents that will never be filed. Yet, we complain about the costs of the programs? Look at Greece, Italy and Spain if you would like to see where the Democrats are trying to take the country! European socialism is unsustainable!

Dan, there was a fascinating essay in the October 3, 2011 New Yorker magazine on exactly your question, and how the Indian billionaire Nandan Nilekani is trying to solve it with a national ID program.

Sir,
I am an Indian. Must say I was ecstatic on reading your book Freakonomics . But your writing here makes me question your writing. All you saw in 30 hours was sadness, poverty and haplessness. Tell me you did not witness the best hospitality and respect. It's not you that they respected or your money or even the title you hold. Not sure many would even know about you. So why has your experience been so pessimistic. Yes, its been 64 years of Independence and we are still developing after our nation had been robbed of everything.
Tell me you did not witness the love and respect for one and all. How many times can you roll down the window of your car on Chicago streets and ask for direction? I will tell you what you'll get in return- Raised brows and if not so fortunate maybe a word not so respectful.
So do me a favor and do take a tour to India and maybe I'll help you witness a side of my nation you weren't lucky enough to see.
There are people sacrificing their lives for grieve stricken, less fortunate, disabled people. Why I am telling you this, I have no clue. It's probably your writing that has angered me. No worries you're entitled to your opinion and so am I.

And here I thought Shreveport was a dumphole.

What's with the multi-page layout? More so, why are the "pages" links below "Tweet/Facebook/Etc" where it is very easy to overlook them?

You owe an apology to the slum people that you met in India. Are you aware of what happens in Trenton NJ or Camden? Are you aware of where your tax dollars are to - the American slums who claim welfare even if they break a nail. The Bible says " remove the log out of your own eye before you try to remove the log from someone else's eye". You as an economist should be aware that slums dwell in every country. Have you walked the streets of the Harlem, the slums in the Appalachian mines? You had dinner with the Australians ....... Did you bother to take atleast one slum family out to dinner in a fancy restaurant? Your IGNORANCE of the Indian history and economics seems to precede you. Please educate yourself before you speak or write about India ever again.

These slums are NO worse than the homeless hangouts in San Francisco (you can see them defecating outside 16th Street bart station or under the Bay Bridge in 3rd Street) or for that matter any other BIG cities in US. The so called slums are formed by homeless people occupying government property. Population and land availability in INDIA compared to that of US, and develop a comparitive predictive modeling, you can see that US is having the same problem even now... eventhough it's a DEVELOPED word for more than 100 years !

Oh I forgot Bronx. First time visitor should land at JFK go through visitor Queue take a cab go to Bronx spend a night In Bronx. If he is alive and in full senses spend few hours on streets of Manhattan Take a flight back from JFK pass through all pat downs and security and write an article. I can't wait to read that article!

Why would anyone judge a country by its cities? That's like trying to develop an understanding of an ecosystem by studying cattle feedlots.