Weight Watchers has ads in heavy rotation with Charles Barkley saying: “lose weight like a man.”

You can also hear him mention his success in his Saturday Night Live monologue.

Something is working. Since starting WW, he’s lost 38 pounds. But what about the Weight Watchers program that has him shedding so much weight?

A YouTube video of an overheard conversation with Barkley and his co-commentators at a recent Miami Heat/Atlanta Hawks basketball game suggests some answers. Barkley said:

I’ve been on Weight Watchers three months. I have to lose two pounds a week. I’m at 38 pounds now. They come and weigh me every two weeks. I ain’t never missed a weigh-in. Never going to. I’m feeling much better. But I ain’t giving away no money… I’m not giving away no free money. I thought this was the greatest scam going— getting paid for watching sports — this Weight Watchers thing is a bigger scam.

The video caused a minor stir because Barkley called Weight Watchers a scam, but in context, his comments just seems like “a provocative way of saying that he likes his job so much it doesn’t feel like work.” But Barkley’s description provides some insight about what’s really motivating his weight loss.

From the transcript, I’m guessing that the group weigh-in is not a large motivating factor.  This doesn’t mean Barkley isn’t using Weight Watchers – since tons of people use WW online and forego the social support of weekly meetings. Barkley emphasizes that they go to him.

What’s troubling to me about the “scam” transcript is that it suggests that Barkley might be losing weight because of the fear of losing money:

It has the whiff of a commitment contract – even with a third-party referee.  I don’t know the details of his endorsement deal, but there is a chance that Barkley’s pay turns on his weight at each weigh in.

In some ways this is unsurprising. Subway would stop using Jared Fogle as a spokesperson if he regained too much weight. Jenny Craig was not happy with Kirstie Alley when she regained most of the weight she had lost on their program. So it’s to be expected that Barkley’s spokesperson income would be tied in some way to his weight.

But if Barkley’s financial incentives in his endorsement contract are too explicit or too extreme (like Curt Schilling’s $2 million weight loss incentive), then it’s a little misleading for Weight Watchers to be running an ad campaign attributing his success to their product.

I’ve criticized the factual claims behind Weight Watchers (“because it works”) ads before, and I want to be clear that I don’t think the Barkley ads rise to the level of deceptive advertising under the Lanham act.  But consumers might feel ill-used if they learned that the Weight Watchers deal contractually obligated Barkley to eat Nutrisystem meals. They might also be upset if (and it’s a big if) they learned he was losing weight, at least in part, because he would have to “give away free money”  if he did not lose 2 pounds a week. 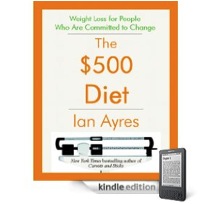 Such a diet sounds a lot more like my favorite diet program,  The $500 Diet: Weight Loss for People Who Are Committed to Change

(If you want to avoid paying $2.99 to read it through Kindle, you can read a free excerpt or even listen an audio-recording of me reading the entire booklet for free on iTunes).

We love Charles for the same reason everyone loves Charles, he’s unfiltered. We are thrilled that he is having great success and inspiring millions of men to join him. We agree that being a spokesman for Weight Watchers is a pretty great gig.

And from Charles Barkley:

I meant what I said, the fact that I’m dropping pounds, getting healthier and getting paid at the same time, is my definition of a great scam. The only problem is I’m going to have to use some of the money to buy a new wardrobe.

The power of the almighty dollar. I suspect that the government could make a big dent in the obesity epidemic if it provided a financial incentive to individuals to lose weight.

I've got an even better suggestion. What if we created health insurance pools based on percentage of body mass index. For instance, if you are 30% over BMI you are pooled together with all the other 30%ers of your gender and you pay a premium dependent on your higher risk.

Just imagine how hard people would work to become part of the 0% BMI pool with the significantly lower premiums.

Problem with BMI is it doesn't take into account a lot of factors. An athlete like A-Rod is considered obese by BMI standards. Percent body fat is better indicator of health but harder to measure accurrately.

An abundance of hot boodie at the WW meetings?

the scam is that he doesnt have to pay to be in weight watchers... he's not calling the program a scam... just that fact that it is free if you do what you're supposed to

It sounds to me that Charles is liking losing weight. It's a "scam" because he's doing what he wants to do anyway, and they are paying him for it. I don't know how that's deceptive at all.

Let's see how much he weighs a year from now.

I believe that with WW if you continue to lose you do not pay after a certain point, but if you gain weight you pay the weigh-in fee.

Fifteen years ago, I worked at Weight Watchers International and led the launch of 123 Success in North America. We launched with the ad campaign "losing weight, it's the hardest thing" featuring Sarah Fergusson, the Duchess of York. Remember the ads - it's harder than being called the Dutchess of Pork... At that time, Oprah had regained her weight, Nutri-Systems was in its nth bankruptcy, the FTC had law suits about weight loss claims etc. We had to tell the truth - losing weight is hard but points makes it easier. Before Points, there was Selections - 5 variables.

During the launch I used 2 books for guidance - Weighing the Options and Changing for Good. Weighing the Options was meta research on what works. At one level, losing weight is relatively straightforward: calories in < calories out. Behaviorally, key predictive variables are writing down what you eat and a check in with a 3rd party. The meeting was socially important to some people for continuity (keeping up the weekly meetings), though it directly did not affect weight loss. Many weight watchers members did not see value to the meeting, but they always came for the weigh in. We called them "weigh and go's"

The weigh in was critical. Much like a Catholic confession, weigh-in is 1 on 1 accountability to a 3rd party. It is non-judgemental and extremely effective at a behavioral level. It is no wonder that Barkeley mentioned it and values it so highly.

Keeping weight off is the second trick. After all, people don't want simply to lose weight. They want to lose it and keep it off. The predictive variables for keeping weight off are different from those for losing weight. In other words, most people can't diet to stay thin. The big variable for how long you keep weight off is exercise. The big variable for how much you keep off is hours in front of the TV (today this probably means hours in front of the computer).

It is easy to overplay the value of financial incentives. Having designed sales comp plans and been baffled by how little they change behavior, I've learned that the leadership/social levers are much more effective for behavioral change. Even if Charles were not being paid and he had a weigh in, it would work. Lose the weigh-in and its accountability and it will not work as well.

Lastly, Weight Watchers leaders have all wrestled with and triumphed over their weight problem. These are not skinny people dishing out advice they never took to solve problems they never had. In that sense weigh-in is less like catholic confession. There is an authentic empathy to weigh in that makes it all the more effective.