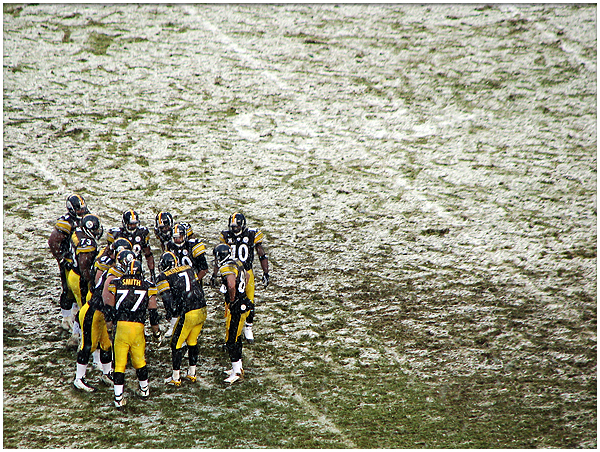 The following is a cross-post from NFL.com, where we’ve recently launched a Football Freakonomics project.

Well, it’s January. And even though my team stumbled into inglorious, injury-plagued defeat, the most exciting football is yet to be played — some of it in very cold weather.

So we thought it was time to take a look at the various effects, and hidden side, of cold weather. That’s the focus of our latest installment of Football Freakonomics.

It is no secret that weather, cold or hot, has a significant effect on athletic performance. I don’t want to start an argument here about what constitutes a sport and what doesn’t, but I will say that the most frustrating six hours of my life was spent on a lake in upstate New York trying to coax some walleye through a hole in the ice. Brrr!

One of the first football metrics we looked at seemed to confirm that playing in the cold is a hard task, especially when you’re not used to it. Consider teams who play in a dome. In our analysis, when dome teams traveled to play cold-weather teams, dome teams won only 20 percent of the time. Compare that to warm-weather teams, who won 37 percent of their games against cold teams. (Granted, the NFL has only 6 dome teams, so we’re not talking a huge sample here.)

It would seem obvious that playing outdoors as winter sets in makes the passing and kicking games especially hard. Indeed, if you compare stats like field-goal percentage and pass-completion percentage in outdoor versus indoor stadiums as the season progresses (see details in the graphic here), this theory is borne out, at least in small measure. Here, covering games played from 2007-2011, is a look at completion percentage:

Surprisingly, that’s not the case. As Brian Burke at Advanced NFL Stats determined after analyzing scoring during the 2002-2006 seasons: “It doesn’t appear that cold weather reduces scoring.” Cold weather does, however, seem “to slightly enhance the spread between winner and loser by depressing the score of the loser. This is likely due to the ‘dome at cold’ effect.”

So even though it’s a bit harder to complete passes and kick field goals in colder weather, NFL teams end up scoring just about the same number of points. Why? One good reason may be technology: players’ gear and uniforms, field surfaces, and toasty benches probably help compensate for the harsh natural conditions.

We also wondered if cold- and warm-weather teams draft players based on whether they played at cold- or warm-weather colleges. In short, the answer is no. (See this graphic for details.) I guess with the multitude of factors that teams need to consider when making a draft pick, the question of whether your guy is more acclimated to heat or chill just doesn’t register as very important.

One wrinkle worth considering: certain position players are indeed much more likely than others to come from warm- or cold-weather colleges.  Here are the top and bottom three positions drafted from warm colleges:

At least now we know why offensive linemen love to wear short sleeves even in 20-below weather: they’re used to it! I bet they’re pretty good at ice-fishing, too.

It doesn't make any sense that technology is the issue. Technology can't score points; passing, running, and kicking score points. If passing efficiency is down, maybe the completed passes tend to be longer? If kicking is down, maybe there's more running? Maybe because the offense is having trouble, there are more defensive touchdowns in cold-weather games? Something on the field has to be compensating for poor passing and kicking for scores to stay the same, not technology.

It also doesn't make sense to theorize that technology negates the effects of cold on scoring, in the very sentence after you state that cold does have an effect on completing passes and kicking field goals. Do you have some magic technology in mind that works on scoring but not these statistics?

Just goes to show how easy it is to think up a theory and have some belief in it even though it's instantly recognized by someone else as silly.

The metric of warm weather teams traveling to cold weather sites doesn't mean much without factoring in the actual weather. My team, the cold weather Giants, played the domey Falcons last week at home (I was there) and the weather was beautiful, bombs away. And if it wasn't, the Giants have the worst rushing game in the NFL, rare for a cold weather playoff team I would think.

Secondly, anyone that has played the game know that it is just as tough to tackle and cover in bad conditions as run and catch, probably worse. The advantage of knowing when you are going to change direction in a pass pattern is a nice edge over trying to react on slippery ground. You see a lot of slips and TD bombs.

It will be interesting to see if the weather has a factor in the Super Bowl in 2014 -- at Giants Stadium (ok, Metlife Stadium). The first cold weather Superbowl site since....ever. Come on, ice storm!

If the reduced completion percentage in late season games is being attributed to bad weather, how do you explain the comparable reduction in completed passes in indoor stadiums for the same time frame? I would theorize the January reduction is largely due to another factor- playoffs. Playoff teams are more closely matched in ability and are likely more skilled on defense, therefore lowering the pass percentage.

My thoughts exactly. There aren't any teams in the playoffs with a 2-14 record getting steamrolled by the other team to drive stats up. This also explains why the significant dropoff in completions is in January, even though December can be just as brutal weather-wise.

Number of teams doesn't matter, the sample size should be the number of times (games) that a domed/warm weather team played a cold weather team.

Good point. A warm weather team playing at a cold weather site in the playoffs is the lower seed, i.e.: the weaker team by the NFL's reckoning. I would like to see the comparison of just the average lower seed/higher seed/home team/away team.

This weekend 7 of the 8 games were won by the home team.

While I'm throwing out research assignments (:-) ) it would be interesting to know how often the playoff away team is favored. Probably damn rarely, considering the seeding plus the alleged 3 points that the home team supposedly get from the oddsmakers. This year, out of the wild card, divisional, and next week's Conference title games, only two of ten away teams were favored (Pittsburgh and New Orleans).

I hate to play the card regarding the last statement, but have race related stats been controlled for in the final statement regarding position and location of school?

When it comes to what makes us human, it's complicated. One thing is certain, religion aside, knowledge is a powerful tool of survival and something that must be taken into account.