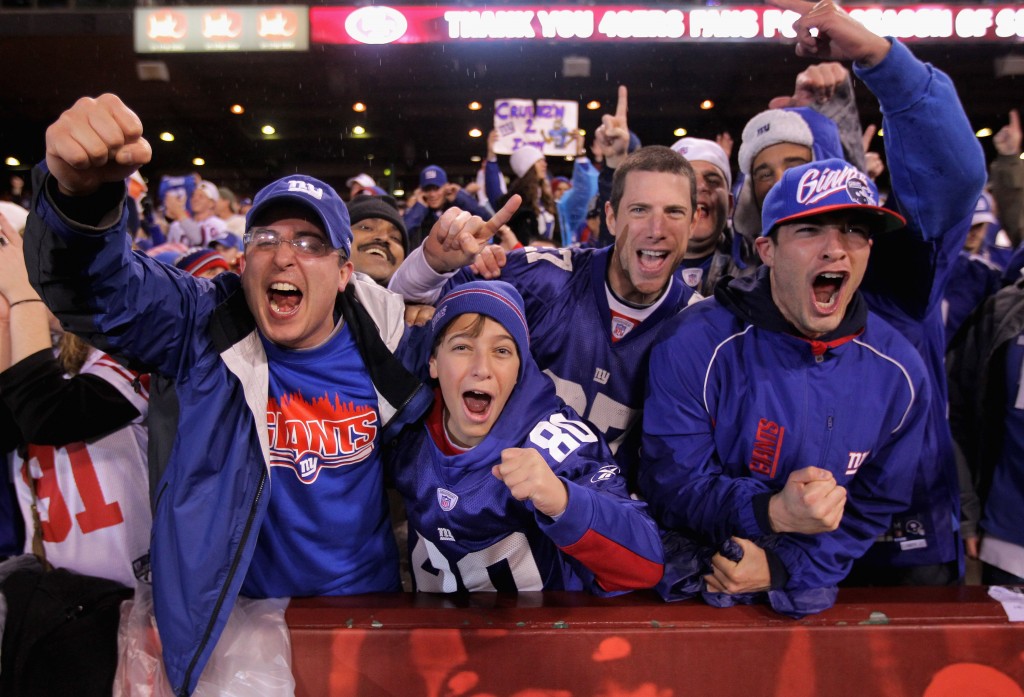 Fans of the New York Giants celebrate after the Giants win on Sunday. (Photo by Doug Pensinger/Getty Images)

Our latest Freakonomics Radio on Marketplace podcast covers the upcoming Super Bowl between the New York Giants and New England Patriots. (Download/subscribe at iTunes, get the RSS feed, listen via the media player above, or read the transcript.)

We figured that of the 100 million-plus people who “watch” the game each year, a lot of them aren’t what you’d call rabid football fans. Does that describe you? If so, this episode is a handy cheat sheet that’ll let you converse knowingly with your football-crazed friends, and maybe even one-up them.

We cover some of the sport’s most cherished conventional wisdoms and show where the reality doesn’t quite match the myth. (You can find more of this  stuff at our Football Freakonomics project at NFL.com.)

Marketplace host Kai Ryssdal is already a big Giants fan, but we also give him a new reason to love the team.

I believe world wide, the number is over a billion.

You must be confused with the other football.

So when does your new book "Freakball" come out? Don't front like you aren't writing it.

I've been very disappointed with the Bud Light commercials since about 2005.

I feel like the quality of the commercials has declined in recent years.

When watching the Super Bowl as a kid I remember being impressed by the numbers: the tens of millions watching, and the fact that it was watched in an absurdly large number of countries. Given the fact that football is only played in the U.S. that always struck me as odd, until I figured out later that every U.S. military base and embassy in the world is likely to be tuned in to the game.

It's similar to the statistics one hears about X many tens of thousands of Americans living & working in Central & South America. That made a lot more sense once I realized that many of those are Puerto Ricans (and thus native Spanish speakers).