Can We Add Carmen and Gang Signs to the "Formerly Repugnant" List?

I have probably seen and listened to more opera than the median American, but that’s not saying much. In other words, I am not very knowledgeable about opera itself, or its history and mores, etc. If I were, what I’m about to tell you probably wouldn’t have come as a surprise. 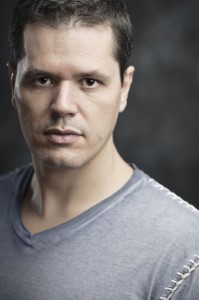 Not long ago, in an airport far from home, I met a nice fellow who turned out to be a Spanish-born tenor now living in the States, named Alvaro Rodriguez. We kept in touch and he let me know that he’d be performing with the New York Lyric Opera, playing Don Jose in Carmen. So I bought my tickets and decided to read up on Carmen since: a) I didn’t know the story all that well; and b) my French is spotty at best; and c) this would be a scaled-down production, with no subtitles, etc.

I’ll skip quickly to the end: the production was excellent, and Alvaro is a wonderful tenor. (Also excellent were Caitlin McKechney as Carmen and Rashard Deleston as Escamillo.)

But in reading up on the show’s history — here, take a look at the Wikipedia page — I learned that Carmen was given a harsh reception when it was first performed and that Georges Bizet died soon after its opening, so (like many artists) he had no idea that his work would eventually become so beloved. Carmen was initially criticized on many fronts, some musical and some cultural — but it is the latter that most intrigued me. It was thought too declasse (or, more precisely, “debauched”) in part because its characters were gypsies and toreadors and low-ranking soldiers rather than the upper-crust characters who more typically populated operas.

Also: Carmen herself was (how to put this nicely?) a bit of a floozy. Whether Bizet and his librettists were taking a feminist view or a misogynist one I know not, but the idea that a free-wheeling, free-loving gypsy woman should be the lead character in an opera in the 1870’s was apparently considered repugnant.

Today, of course, Carmen is one of the most popular operas in the world. This got me thinking about the membrane between what is repugnant and what is not, a topic we’ve explored repeatedly in our writings, often guided by the Virgil of repugnance, Al Roth. In SuperFreakonomics Illustrated

, we included an illustration of how that membrane has been repeatedly crossed throughout history: 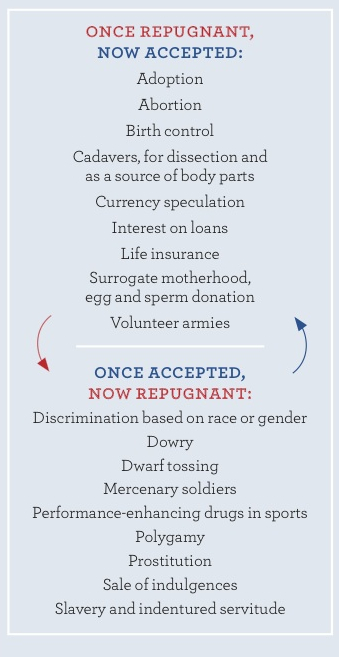 I wish I had met Alvaro in the airport before we put together this book, because Carmen (and, certainly, many more examples from music, art, etc.) would have made a nice addition to the chart.

And here’s another recent nominee: gang hand signals. It wasn’t long ago that you’d get called out for playing with those signs. But the other day, my daughter got in the mail a clothes catalog for summer camp, and the cover photo showed two cute little girls who looked they were auditioning for the Latin Dragons.

Repugnant/accepted to whom, though? There are a couple of items on your accepted list that are obviously repugnant to a vociferous segment of the American electorate. On the other hand, I certainly don't see anything repugnant about mercs, performance-enhancing drugs (indeed, I'm drinking a cup of one right now), polygamy, or prostitution, while dwarf tossing and sale of induldgences, like gang hand signals*, don't even approach the threshold at which I'd be aware enough of them to have an opinion.

I'm eternally grateful that I've largely managed not to live in your strange world, and so am more likely to encounter a bear or mountain lion than a gang member.

PS: And PLEASE add an editing capability. It's so depressing to notice my typos after I've posted, and can't fix them.

Perhaps you should add vote selling to "once accepted" list, for either a person or a politician

I agree with James in a way. The repugnance differs on cultural environment; I can give a few examples: abortion is forbidden in certain countries, considered a crime in Argentina and many countries in South America. Not long ago, the same happened in Spain.
Poligamy sounds repulsive in Europe and the Americas, but not in most of Africa and Arabian countries.
What about monarchy?

I don't even think it's cultural. For example, one segment of mainstream American culture considers abortion & birth control repugnant, while they're perfectly acceptable to the rest of us.

On the other side, I really suspect that very few people outside of a small circle of sports promoters, officials, and politicians actually give a damn about the use of performance-enhancing drugs in sports, let alone find it repugnant.

Prostitution is a funny one on that list. Perhaps it's repugnant in conservative America, but it's legal and legitimate here in New Zealand.

I'm always amazed to read about hostility and outrage towards some artistic creation that is today taken for granted, even considered conservative or tame.

For me the classic example is John Millington Synge's "Playboy of the Western World" play, first performed in 1907 - to riots. Irish nationalists were enraged at the depiction of rural Irish people as uncouth, violent and ignorant. Just one decade before nationalist rebellion, the backdrop of bitter national tensions gave the play a significance that my classmates and I, studying it as teenagers in the 1990s, would miss. As a result, to us it was fairly tame and boring stuff.

I'm not certain but I think Japanese kabuki theatre, much loved and admired today, was also once seen as being quite disreputable and naughty. Yesterday's heresy, meet today's orthodoxy.

Worse: Playboy insulted the Irish women! (The text says that a group of young women wore their "shifts" to visit him, suggesting that they weren't completely dressed.)

I would argue that almost all popular music goes through the same cycle of "noise for degenerates" -> "beloved cultural institution".

Similarly, the animated television program The Simpsons was targeted as Grade A Prime Moral Turpitude during season 1. Public burnings were held for comic books in the 1950s.

Today, graffiti is seen as an art form that can command high prices at galleries (e.g. Banksy).

All insurgent/outsider expression is eventually marketed back to us and becomes mainstream.

When someone pulls up on a motorcycle wearing lots of leather today, I assume they're a pleasant baby boomer, not an outlaw scallywag!

"Today, graffiti is seen as an art form that can command high prices..."

But again, seen by whom? I'd guess that it's not, outside of the very small circle involved in the con game that fleeces nouveau riche art collector wannabees.

The same applies, to lesser degree, to those other things you listed. They attract small segments of the population, who either actually like them or pretend to do so for the perceived coolth factor. The rest of us still regard them as disgusting, or if younger, totally outdated.

St. Louis Opera advertised Carmen with "Spend an evening enjoying Carmen. Everyone else has."

There's no place in sports for performance-enhancing drugs.......unless you wanna be awesome.

I am the guy who sticks up his hand and says, "Wait a minute..!" when the lecturer says, "...Now of course EVERYONE [likes, hates, agrees] on [proposition X]. So I want to make a comment on this list-

The NYT Science section, about ten years ago had an article on how "swears words" gradually became proper language. And so it seems that ass, piss, weenie, fart and a host of other words and phrases have entered the language of polite company. I still remember the taste of Grandma's soap, which she made herself with lye from wood ash and grease.

I think you need to add various sex-related parts and devices which seemed to have become acceptable via humor in "Two and a Half Men"....Porn seems pretty much foreplay for many or most decent people.

You should also add Burlesque, now accepted. Now even trivial....

Bible verses? The Catholics Church's keeping the bible in Latin seems like a pretty good idea. There are lots of things in the bible which would not be suitable for publication here. And there are many people (like me) who think the whole idea of religion is obnoxious and stupid.

Tattoos? Cigarette smoking? These are in transition.

I believe paedophilia would definitely have to be added to the list. In many societies it has been common practise to have sex with and marry girls as young as 10. Thankfully this is no longer accepted in most cultures.

"French step-ins", known to the modern shopper as "Grandma underwear". When long bloomers were normative, the short "French" style was associated with loose sexual morals.

The preeminent historian, Will Durant, said something to the effect that, if you piled up all the things sacred to one culture, and then removed all the things repugnant to another, you'd have nothing left. That helps me keep the current culture wars in some perspective. I support a woman's choice in abortion, but I wonder if my grandkids will look back with horror on our tolerance of this unpleasant act and wonder what we were thinking, much as we so easily dismiss all past rationalizations of slavery.