Where Have All the Bobs Gone? 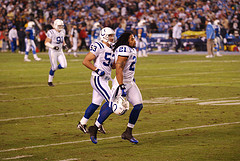 Jon Bois at SB Nation writes about the disappearance of Bobs in sports:

Across the histories of Major League Baseball, the NFL, the NBA, the NHL, and NCAA football and basketball, there have been a total of 1,884 athletes who primarily went by the name Bob. Not Robert, or Bobby, but Bob.

Of those 1,884 Bobs, Sanders [of the San Diego Chargers] is the only one still playing.

We’ve written regularly about names and how some just go out of fashion. The fact is that “Robert” is still holding its own. From the Social Security Administration’s Names Index:

Popularity of the male name Bob