Are Super Bowl Ads Too Cheap? 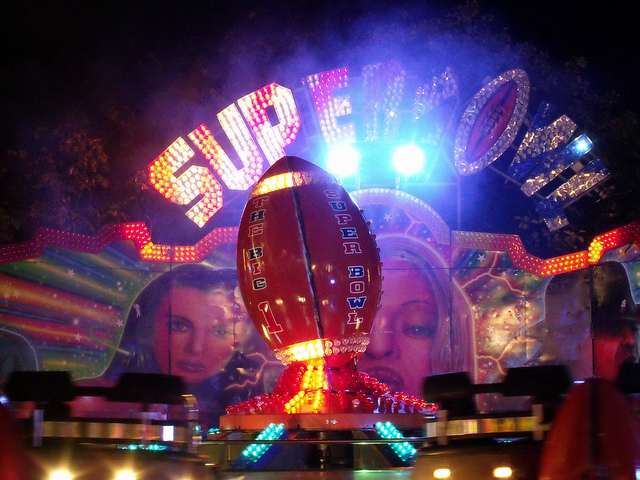 The following is a cross-post from our Football Freakonomics project at NFL.com.

The Super Bowl has by now become such an institution – it’s practically a second New Year’s Day – that just about everyone feels compelled to watch it, even if they don’t care one bit about football. One consequence of this fact is that the broadcast of the game (on NBC this year; it rotates annually among NBC, CBS, and Fox) has turned into another event entirely: the most massive real-time advertising opportunity in history.

This has had a few linked effects: the price of the ads has risen ever higher; advertisers spend more time and effort making better ads; and the ads have gotten so good that a lot of people time their kitchen or bathroom breaks to the game action in order to not miss the ads.

So we wanted to learn a bit more about Super Bowl ads. That’s the focus of our latest installment of Football Freakonomics. You’ll find a ton of worthwhile information in the graphic here, including a look at some advertisers who no longer exist: 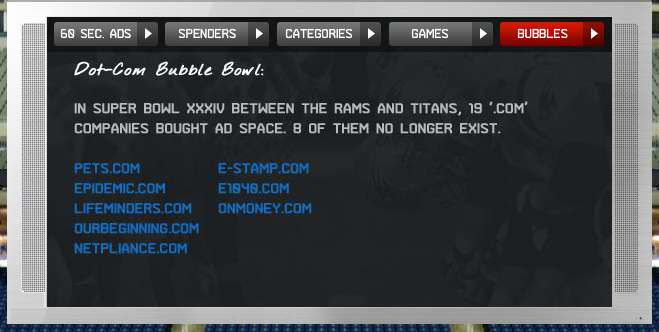 The video (below) features three people who tell us what they know: Bob Parsons, CEO of GoDaddy.com, perhaps the scrappiest Super Bowl advertiser in recent memory; Darren Rovell, the excellent sports-business reporter at CNBC; and the man of the hour, Seth Winter, head of sales for NBC Sports. Winter tells us that NBC sold out the Super Bowl at a record price (an average of $3.5 million per 30-second spot) well in advance of the game, bringing NBC roughly a quarter of a billion dollars in revenue. For one football game. In a down economy.

But the most interesting theme that emerged from talking to these folks is that, as expensive as those ads are, they may be severely underpriced. Think about it. Supply is constricted (there’s only one Super Bowl – so far, at least). Demand is massive. And the price that’s set in the market – well, it really isn’t a market, at least not how we typically think of a market, with multiple sellers and buyers exchanging information over time. Selling the Super Bowl is more like an auction, except the auctioneer sets one price that applies to pretty much everyone, and you’re either in or out. To date, the seller always has enough buyers who want in, even at what the public seems to think is an outrageous price.

But what if, as Rovell suggests, the seller were to conduct a real auction, letting buyers bid against each other for each ad spot? Maybe a 30-second spot during the middle of the third quarter would fetch “only” $2 million – but the ads just before kickoff might make up for it, going for $10 million apiece!

I sincerely doubt we’ll see this happen anytime soon. Corporate culture is inherently a conservative culture. So is football, by the way. A head coach might read a research paper suggesting that it’s usually a bad idea to punt – even in your own territory — but few coaches actually have the courage to act on what the data say.

But who knows. Maybe one of the networks will take a long, hard look at the Super Bowl ad “market” and decide that they’ve been leaving hundreds of millions of dollars on the table, and try something outrageous.

Which could end up making this year’s record price of $3.5 million seem like a steal.

I don´t have any idea of superbowl, never have watched a match, why is that a spot "during the middle of the third quarter would fetch “only” $2 million – but the ads just before kickoff might make up for it, going for $10 million apiece!"??

Because everyone is watching at the beginning. Lots of people gather for superbowl parties, and by the 3rd quarter they just aren't as attentive. These people aren't football fans, they are just watching the spectacle or being social.

Very interesting data. Since the Superbowl runs on a rotational network schedule, I would like to see the numbers per network. This could show if any particular network is capitalizing that much more than their competitor.

I was surprised to hear that all commercial spots for a given length have the same price. But as an advertiser I wouldn't know how to price them. I would generally say the earlier the better, as people lose interest, leave parties, etc. by the end of the game. But what if it's a crazy good game? What do you do about halftime? I - as a football fan - am usually out getting some guacamole during halftime. But I don't think I'm the target audience either... the commercials are never the highlight of my Super Bowl evening.

I'd guess the most viewers are tuned in during the kickoff and halftime.

Conservative indeed. In the only live NFL game I have ever seen between Miami and Buffalo, Miami was 21 points down in the 4th and punted on 4th and 4. Try for heaven's sake!!
My friend and I left. We drove to Buffalo from Canada just to see an NFL game and we still left early because of that.

I still like football but coaches could stand to put some fun back into the games.

That being said, the NFL is still more enjoyable than the CFL and still better than hockey.

> Selling the Super Bowl is more like an auction, except the auctioneer sets one price that applies to pretty much everyone, and you’re either in or out.

Another thing I wonder is why ticket sales aren't done through auctions? Regular sporting events might be slightly different, but one-shot deals like the Super Bowl and rock concerts also seem to be underpriced. That's why large organizations and people looking to make a few extra bucks buy tickets early at face value when they know they can resell them for (sometimes huge) profits. Often to the chagrin of the teams or promoters who wish they could prevent scalping, but can't really do much about it.

Selling the tickets at auction for large, well-known events seems to me would capture a large portion of that consumer surplus.

Surely the steal here is the rotation between the networks. Why don't they just sell the rights to the highest bidder each year? I'm from outside the US so may have missed some cultural reason.

I wonder if a company could capitalize on this, buying up a bunch of Super Bowl slots then reselling them for a premium after the network sells all the slots.

How do you think the prerelease of ads online has affected the value of the spots during the broadcast?

I personally watch the game...for the game...not for the ads. The ads actually bother me..they build too much tension..I'm just waiting for the next play and hoping my team lights it up. And the ads are just to make money regardless if they are entertaining or not.

no matter what method is used to sell the spots-the math is still eyeballs/cost. Its not much different than paying $1500 for a 2:00 am spot in Youngstown Ohio; if anything is less costly.

I think it is a very good point made about raising the cost of a 30-sec ad. I definitely think if they raised the price a couple million dollars companies would still pay this cost. Many spectators don't actually care about the game and just watch it for the commercials. This event is so huge that companies couldn't possibly pass up the opportunity for such quality advertisement.

The Superbowl is such a huge social event, so it is easy to see why so many companies are willing too spend so many millions of dollars on TV ads. People don't just watch the Superbowl for the game, they watch it for the commercials. So it is up to these ads to not only get their point across about their product, but also to entertain its viewers. Every year viewers are looking to see which commercial is the best; or whichever stands out the most.

“Those 30-second videos during the timeouts were awesome; though they went a little overboard with the product placement, I thought.”

Covid-19 has shocked our food-supply system like nothing in modern history. We examine the winners, the losers, the unintended consequences — and just...

What Happens When Everyone Stays Home to Eat? (Ep. 412)

Covid-19 has shocked our food-supply system like nothing in modern history. We examine the winners, the losers, the unintended consequences — and just...