You Are What You Say: Democrats and Republicans in Blue and Red

Our latest podcast is called “How Biased Is Your Media?” (You can download/subscribe at iTunes or get the RSS feed.)

It includes an interview with University of Chicago economist Matthew Gentzkow, who discusses a study he coauthored with Jesse Shapiro about newspaper bias. They used a sample of 433 newspapers and sorted the phrases favored by Congressional Democrats and Republicans. 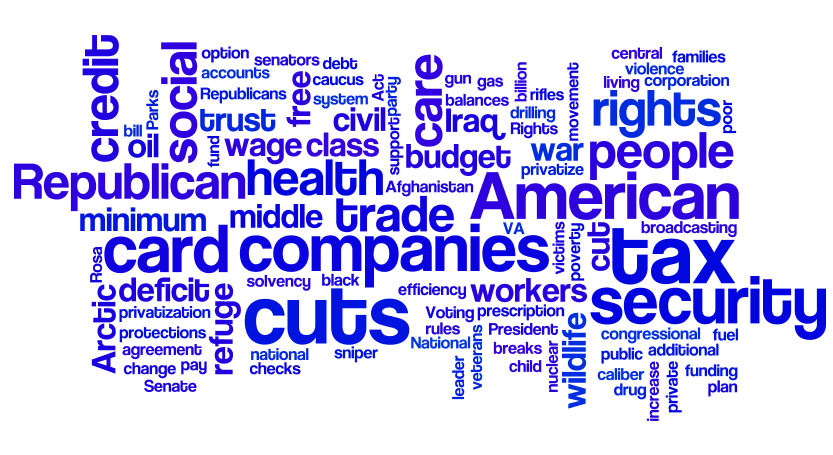 And the Republicans’ favorites: 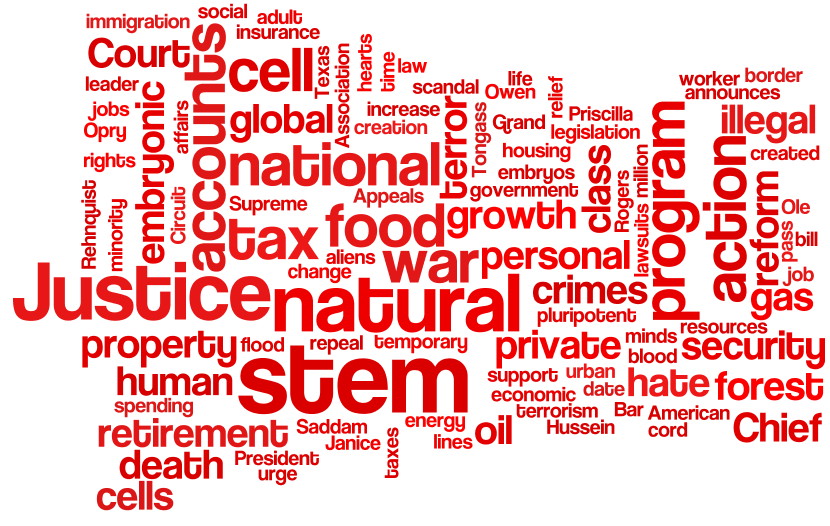 When I was oh so younger, it is my recollection that on the Huntley-Brinkley (and the other network) election coverage maps, democrat states were red and republican states were blue. Now I may completely demented but it seems that since Clinton-Bush election the liberal news media decided not to associate the left wing of our body politic with what should their color: the color of revolution, radicalism, and communism, red. What say you?

As I understand it, the colors used are supposed to alternate, so red and blue should not be associated with either party. Don't know if they have been locked in now by public opinion.

Odd that "Stem" is so much larger than "Cell" What else are they talking about "Stem"s for?

Could be, but why would Congressional Republicans use "Stem" in that context?

Some of the words are weighted the same and in close proximity, which made me wonder about Democrat's thoughts on the "wage class" system, as well as Republican's objections to environmentalists trying to preserve the "hate forest".

It is also interesting to note that "Republican" and "Republicans" show up in the Democrat's chart, but the opposite is not the case in the Republican's. And does "pluripotent" really come up that often in conversation?

It is also interesting to note that the Democrats frequently discuss "Republican Health", and the Republicans discuss "Retirement Death Cells".

Arrangement of seemingly unrelated words can d give rise to some oddities. For example, in the bottom center-right of both I can see "President breaks child" (for the Democrats) and "support economic terrorism" (for the Republicans).

For that matter, what is Priscilla legislation? Some means of increasing creation, no doubt. And do Dems really seek gun-gas balances? I suppose if your in a fight against the Central Violence Corporation, each might come in handy. Or it could be part of the privatize war movement.

I suppose that this tells you a bit about how to construct essays that may be expected to "please" the desired listeners.

I wonder what the Canadian equivalents are; I'm pretty sure that our (Conservative|Liberal|NDP) groups have analogous biases.

And if you're trying to ask something of your representative, who might hearken from a different party than you do, it's kind of useful if you can word things in such a way that you don't get instantly dismissed due to sounding like you're coming from a perspective that they don't care so much about.

I am disappointed that the study paper does not give a clear conclusion of "Liberal/Conservative" slant on the news question. Or maybe I just couldn't see it.

Curious point of no particular importance--

The Republican words include proper names: Saddam, Hussein, Janice, Rehnquist, Rogers, Owen, Priscilla; while the Democrats have only Rosa (Parks?).

@Mark West The convention of blue representing the democratic party and red the republican party was established in the 2000 election. You may recall that the election ended in a rather strange way, with recounts in Flordia, associated court cases, and Al Gore ultimately losing in the electoral college despite a majority of the popular vote. In explaining all this, the media made frequent discussion of "blue states" and "red states" resulting in an association of those two colors with the democratic and republican party, which has been carried forward from that point on. Had this occurred in 1996 (when red was representing the democrats and blue the conservatives) we likely would have ended up with the exact opposite system like in Europe, where liberals tend to be represented by the color red, and conservatives by blue.

I'd forgotten about the switch, but I just assumed it was the way Faux News wanted it, with the red-blooded 'mairkins voting R and those blue-blooded coastal elite types voting D. Surely Democrats would want to avoid an association with red if it connected with communism. And by the way, I have a hard time believing one would find a Republican who would use the word "pluripotent"... that has to be some kind of outlier.

I thought that the "scholoarly" analysis was pretty weak in this last podcast. Real machine learning techniques (see Standford's online classes if you need references) would have produced better results. Also, the PQ test that was the basis of the decisions was horribly constructed. It's dumb to post the answers (how each party voted) in the question, and the issues were so arcane that most people's political positions can't be accurately judged by them. Furthermore, it assumes that voting record in congress is tied to polticial position (instead of political party). Of course democrats voted for Obama's health care bill.

I was intersted in this topic at first, but as I read the underlying research, I was seriously dissapointed.

"stem" is larger than "cell" because they have both "cell" and "cells" on the map.

WONDER WHERE OBAMA GOT THAT $250 MILLION? THE RICH LOVE HIM!

In fact, affluent Americans have represented a growing portion of the Democratic Party for a generation.

(AS I'VE SAID BEFORE, DJIA IS MUCH BETTER WITH DEMS IN WHITE HOUSE,

AND SMART INVESTORS KNOW THIS!!!)

The conservative author Charles Murray, in his new book “Coming Apart,” which is about the nation’s widening class divide, identifies “Super ZIP codes” that the “hyper-wealthy and hyper-elite” call home.

Even as he proposed higher taxes on the wealthy in 2008, Mr. Obama beat Mr. McCain

Bren Smith, who grew up fishing and fighting, is now part of a movement that seeks to feed the planet while putting less environmental stress on it. He...