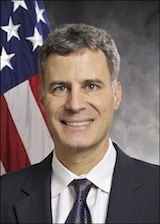 The Council of Economic Advisers last week released its annual Economic Report of the President.  The CEA’s report, which dates back to 1947, aims to provide “an overview of the nation’s economic progress” while presenting “the Administration’s domestic and international economic policies.”  This year’s report lays out the “defining issue of our time”:

One of the fundamental tenets of the American economy has been that if you work hard, you can do well enough to raise a family, own a home, send your kids to college, and put a little money away for retirement. That’s the promise of America.

The defining issue of our time is how to keep that promise alive. We can either settle for a country where a shrinking number of people do very well while a growing number of Americans barely get by, or we can restore an economy where everyone gets a fair shot, everyone does their fair share, and everyone plays by the same set of rules.

The CEA’s chairman is Alan Krueger, an economist whose work may be familiar to readers of this blog. Here’s his take on some of the material in the new report:

Research by Charles Kindleberger, Carmen Reinhart and Kenneth Rogoff, and others finds that recessions associated with financial crises not only tend to be deeper than other types of economic downturns but also longer lasting. The effect of the financial crisis can be seen in the disparate recovery across sectors of the economy. Some sectors of the U.S. economy are recovering at a moderate or even quick pace, while growth in other sectors continues to be restrained by the lingering effects of the financial crisis. Typically, residential homebuilding and State and local government spending play a much stronger role in a recovery than has been the case since mid-2009. Yet excess home and office construction during the housing bubble as well as State and local government spending cuts and layoffs have caused unprecedented headwinds that were not present during other postwar recoveries. Meanwhile, business fixed investment has been about as strong in the current recovery as in the average U.S. recovery, and growth in exports has been stronger than in the average recovery.

Yet, as bad as the Great Recession was, the United States appears to have fared relatively better than other countries that have experienced severe financial crises…

Krueger argues that the economy is recovering fairly well:

There is almost nothing the White House can say these days about the economy that won’t be greeted with loud responses of both boosterism and derision. I expect this new report to be greeted no differently.

But here’s the catch: Krueger has agreed to field questions about the CEA report from Freakonomics readers.  So instead of just shouting at the heavens, you get to actually engage with the White House’s top economist. Leave your questions in the comments below and, as always, we’ll post the answers in short course.

That promise is long dead. I'm a workaholic who's been unemployed for over two years now. I've been back in school for close to 2 years, but have no allusions of getting a job that pays a living wage in the USA.

Ron Paul's idea of abolishing the Fed sounds common sensical in theory; but, in practice, would it be worth the transition cost and/or investor uncertainty, if any?

Most average Americans would agree that the "Occupy" movement followers are extremists; however most of us also would agree that their underlying theme is sound. The wealth-gap is out of control and the current laws and societal norms perpetuate this. What can realistically be done to diminish to ever expanding wealth gap? How would you recommend accomplishing this in such a way as to both improve our country's financial well-being and help combat our enormous national debt?

I went to a lecture last year at the London School of Economics with 2 professors who were advising the UK government on fixing the unemployment problems. Their answer was education and innovation. Although this is a mom and apple pie answer (uncriticizable), to a skeptic this answer sounds somewhat suspiciously self-serving from a couple of guys selling education and advisory services to businesses (and governments). My reply to them was that the U.S. had more successfully taken a different route than the U.K. in NOT administering austerity (primarily under your predecessor Cristina Romer) because the multiplier on fiscal tightening was so high and that short term growth measures were also required (although I was not a fan of cash for clunkers et al). What is your answer to the quadrillion $ question on everyone's lips: how do we stimulate employment in the short/medium term in the U.S. and elsewhere??? Another way to put this question: what is the best trade-off between policy intervention and moral hazard from the point of view of employment and growth at this juncture?

Do you view the number of H-1B visas issued these past few years as the optimal number(s) for both short-term and long-term economic growth in the US? It seems that one of America’s greatest advantages is its status as the world’s greatest importer of the highly talented people from other countries. Why isn’t this number *much, much* higher than it is today?

I look at the long-term unemployed figures and feel that they are telling me that there is a dramatic skills mismatch between what skills job seekers have and what skills job seekers are developing (through schooling and other avenues). Do you agree? If so, then what could/should be done by individuals, and separately, the White House?

The cost of post-secondary education has continued to rise at a healthy clip over the past few years, even though the growth rates of GDP, CPI, and Consumption Spending hit some bumps in the road the past few years. The rise in student debt seems unsustainable and in my view will distort the labor market and the health of household balance sheets. How do you see the increasing amount of student debt either positively or negatively affect the job market, if at all?

A lot of the news surrounding the recession and the recovery focuses simply on jobs and salaries, without much discussion about what people in those positions do, what they add to the economy.

If a company, let's call it Teldar Paper, increased its number of Vice Presidents from 3 to 33, paying each of the new people more than $200,000, we'd praise them as a job creator. They created jobs, and not just any jobs, but really high paying jobs! Way to go Teldar! Give them a tax break! Few people would stop to say that the new VPs at Teldar don't actually do anything, they just sit around sending useless memos to each other. Rather than growing the economy, Teldar is hurting it. It's wasting time, energy, and intellectual resources, not much better than buying paper just to burn it.

Back in 2010, Antonin Scalia made a similar point, that we're devoting too much of our intellectual resources to the practice of law, which at the end of the day doesn't really produce anything. (http://blogs.wsj.com/law/2009/10/01/scalia-we-are-devoting-too-many-of-our-best-minds-to-lawyering/) Many within the legal profession are happy that laws are becoming more complex because it means more work for lawyers, though no additional value is being created.

Are there any efforts, either within the White House or elsewhere, to create better metrics of economic growth? Is anyone looking at what it is we do all day, what we make, and whether these are worthwhile ways to spend our time?

Knowing that we face a Social Security deficit soon (and that funds are estimated to be exhausted during my lifetime) and that people are living longer, why isn’t the retirement age increased dramatically? (I thought that Social Security was meant for the last few years of a US citizen’s life.)

Do you think that the recent decoupling of U.S. and European economic growth weakens the case for introducing austerity during a weak economy or recession?

Corporate profits have been robust while the problem of higher long-term unemployment lingers. This suggests firms have reduced their need for labor - either through innovation or efficient management.

Does a higher level of long-term unemployed suggest that this segment of workers face structural unemployment? If so, doesn't that decrease the efficacy of stimulus spending which is used conventionally to combat cyclical unemployment?

According to the IRS, the # of pass-through businesses, which are businesses that are not taxed at the corporate level but instead pass along most profits to shareholders who then pay taxes, has grown steadily over the past 30 years, while the number of taxable corporations has declined consistently since the mid-1990s. Without any change, this trend will continue. What do you believe are the positive and/or negative longer-term implications of more pass-through businesses and fewer taxable corporations? Otherwise, why isn’t this being addressed more in any discussion about tax reform?

The idea of Pigovian taxes make sense to me. (My definition for the readers: it’s the idea is that if you want less of a certain type of behavior, you tax the behavior more and then the behavior will most likely decrease. A higher gas tax is an example.) It seems that in every State of the Union Address, energy independence is a topic that is brought up. What prevents the implementation of a much, much, much higher tax on gasoline now? Is there little appetite among politicians? What is the CEA’s view of much higher gasoline taxes? Asked specifically: why aren’t gas taxes here in the US as high as they are in other countries? Wouldn’t the country *as a whole* be better off?

"The Affordable Care Act represents the most significant improvement
in the health care safety net since the advent of Medicare and Medicaid
in the mid-1960s."
It seems like a lot of the ACA is paid for via regulating insurance and pharmaceutical companies via excise taxes and premium spend requirements (insurance companies are required to spend 85% of premiums). Do these contra-free market policies make you uncomfortable or are they necessary steps to control health care spending?
Will the fee for service model be the reigning system or do you think ACOs might change that?

In a lot of campaign speeches, we hear talk about either direct or indirect penalties levied against companies that continue to outsource jobs. (Else, we hear about proposed benefits to companies that stop outsourcing, which in my book is a penalty against those that do outsource.) But capitalism is driven by maximizing profits, so companies only outsource b/c that would lead to more profits than growing businesses in less-favorable environments (be it talent, taxes, etc). Why hasn’t the US figured out ways to make outsourcing less attractive, which would stop the growth of outsourcing? Or do you feel that I am thinking about this incorrectly?

Professor Krueger, You’re somewhat new to the job. What has been the most surprising thing about your position that you’ve learned since you took the post? Separate, but related, question: is the partisanship in DC bad?

Inflation provides an incentive to spend and invest.

Inflation leads to higher nominal interest rates, so that in a recession, it is possible to stimulate the economy by reducing interest rates.

Who's the better basketball player, Secretary of Education Arne Duncan or President Obama?