The Social Pressure of Charitable Giving 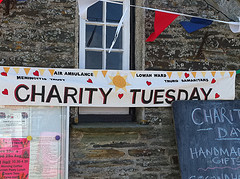 We recently heard from John List, the economics-of-charity guru, about the use of lotteries in fund-raising.

Here now is a new List paper, co-authored with Stefano DellaVigna and Ulrike Malmendier, published in the Quarterly Journal of Economics, called “Testing for Altruism and Social Pressure in Charitable Giving.”

Our results indicate that unsolicited campaigns may lead to utility losses equivalent to hundreds of millions of dollars for the givers.  These results have implications for the optimal taxation regime of charitable giving, as they suggest that high-social-pressure solicitations may be welfare-decreasing for the giver.

Although this could be used as an argument to introduce a do-not-solicit or do-not-call list for charities, our findings suggest a simple alternative: to provide an opportunity to the households to sort or, even better, to opt out.

And here’s the abstract:

Every year, 90% of Americans give money to charities. Is such generosity necessarily welfare enhancing for the giver? We present a theoretical framework that distinguishes two types of motivation: individuals like to give, for example, due to altruism or warm glow, and individuals would rather not give but dislike saying no, for example, due to social pressure. We design a door-to-door fund-raiser in which some households are informed about the exact time of solicitation with a flyer on their doorknobs. Thus, they can seek or avoid the fund-raiser. We find that the flyer reduces the share of households opening the door by 9% to 25% and, if the flyer allows checking a Do Not Disturb box, reduces giving by 28% to 42%. The latter decrease is concentrated among donations smaller than $10. These findings suggest that social pressure is an important determinant of door-to-door giving. Combining data from this and a complementary field experiment, we structurally estimate the model. The estimated social pressure cost of saying no to a solicitor is $3.80 for an in-state charity and $1.40 for an out-of-state charity. Our welfare calculations suggest that our door-to-door fund-raising campaigns on average lower the utility of the potential donors.

why assume the motivation for giving is either x or y. I had a set of world book encyclopedias. They were gold and leather bound and hardly used. I tried to give them to a thrift shop and they would not take them. My daughter suggested that I pack them away neatly til I find someone who would want them. So I decided to go looking in the town next door. Sure enough, I saw this man I had seen before and recalled his having a few kids. He has two young daughters and said that they loved to read so of course he would love them. He wanted so badly to give me something in return. I explained that just knowing that there would be a few kids reading them was enough. In the course of our conversation, I learned of his ancient Chinese and Korean backround and interest in Italian culture (music) Italian food (had a restaurant) and phtotgraphy(was a trained photographer and had a shop at one point). Indeed, I had made a friend. That was good enough.

I feel like studies such as this one make the insufficiency of classical rationality assumptions seem obvious. Specifically, I think it's reductive to think of the motivation for charitable giving as increasing the giver's welfare. Most charitable donors, I would imagine, are actually assessing not the impact their gift will have on their own welfare, but rather its impact on total welfare. While it is different from most similar situations in that it does involve direct cash transfer, I would imagine that charitable donations are an area where social norms prevail over market norms (via Dan Ariely). That is, donors are aware that their donations are above the utility-maximizing level, but give anyway due to a feeling of social obligation--which would be enhanced by the social pressure of a door-to-door campaign. This is also why i would think, empirically, lotteries would yield less total contributions than a VCM (it changes what is normally social obligation into a market transaction). Let me know if there's studies that prove me dead wrong.

The results here are pretty similar to a previous study by Dana, Cain, and Dawes (2006) on the "Dictator Game" (http://en.wikipedia.org/wiki/Dictator_game), saying that people would rather pay to exit a situation rather than feel obligated to donate money.

Suppose I leave my money in the bank instead of giving it to charity. That means the bank has more money to lend to businesses. They can expand more. That could increase social welfare. How do we know if it increases social welfare less than if I had donated to charity?

Back in college, our class did an experiment on the social pressure of giving. A donation box was placed in a room with no cameras or people. Every individual was handed Rs.100, and asked to go into the room and donate a part/whole or keep the amount with themselves. The money collected would be sent to an NGO working for underprivileged children. There was no way of knowing how much an individual had donated, and so the majority donated between 10-20 rupees. The experiment was repeated, by removing the anonymity clause. The names of the ten highest donors would now be put on the class notice board. Not surprisingly, the collection in the second experiment was much higher than the first, and there was a huge crowd outside the notice board eagerly waiting to see the name of the most "generous" person in the class.

Before you write off door-to-door fundraising, I'd have a think about the utility gained by the poor buggers the charities are helping.