The following is a cross-post from our Football Freakonomics project at NFL.com. Check out the interactive graphic and, at the end of this post, the video. 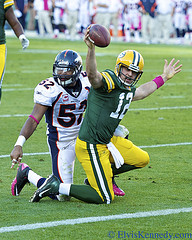 Are you the kind of person who loves to hunt for undervalued stocks that are ready to pop? Or maybe you cruise tag sales and flea markets hoping to find an old stamp collection or oil painting that’s worth millions?

If so, you may like our latest Football Freakonomics episode. It’s called “Dough Bowl.” It is our tribute to the NFL’s best bargains, the players who lit it up this year for far fewer dollars than their counterparts. (We had a lot of help on this one, since it isn’t always easy to get good salary and cap-hit data. Big shout-outs to Scott Kacsmar and to Spotrac.com founder Michael Ginnitti; also: a big hat tip to the Ravens’ Domonique Foxworth for suggesting the idea.)

We put together an entire offensive and defensive roster of Dough Bowl stars:

I am sure you will object to some of our choices, and I’m sure you won’t be shy in voicing your objections. The toughest choice, and likely the most controversial, was Aaron Rodgers at quarterback. How could a guy who’s paid $7,250,000 in base salary, with a $10,400,000 cap hit, be a bargain? (Note: he’s also the only guy on our roster to even exceed $1 million in base salary.) Here’s Kacsmar’s explanation:

“It would be hard to argue another quarterback had a better regular season than Rodgers. With the likes of Brees, Brady and Eli all having a higher salary, Rodgers clearly had better value than anyone ahead of him. When you compare him to players that cost about half as much such as a Tim Tebow or Tony Romo, Rodgers does have numbers that says his season was at least twice as good.”

The runner-up at QB was a player whose salary was more in line with the other Dough Bowlers: Andy Dalton of the Bengals, with a $375,000 base salary and a cap number of $948,036. His numbers weren’t in Rodgers’s league but they’re pretty good: 9 wins and 20 touchdown passes. (In the end, neither Rodgers nor Dalton won a playoff game.)

There’s one name missing from the roster above – the man we elected our MVB, or Most Valuable Bargain. I don’t want to give it away here – the video and interactive graphic are worth spending time with – but see if you can guess him by process of elimination. A couple of
further hints: our MVB gained 2,068 yards from scrimmage for just $600,000 in base pay, and fans of a certain AFC North team — not, alas, my team, will approve our choice.

Some of our Dough Bowlers are about to strike it rich with new contracts. But some are locked in to cheap contracts and will to repeat this year’s performance to get the big payday. Furthermore, this off-season promises to be one of the most chaotic in history: more than 600 players will have their contracts expire before free agency starts on March 13.

After a recent Pro Bowl that was a bit, um, lacking in intensity, there is talk of eliminating that game. But can we hereby agree to never, ever get rid of the Dough Bowl?