Why Did the NBA Miss On Jeremy Lin? 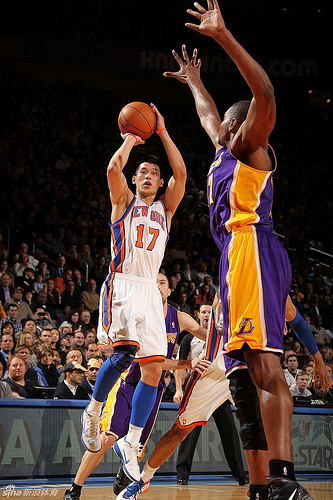 In my last post, I reviewed how difficult it was to evaluate quarterbacks in the NFL draft. Essentially, I noted that there were several factors connected to where a quarterback was selected in the draft. But those factors failed to predict future performance. Given how difficult it was to just predict the future performance of veterans in the NFL, the difficulty people have forecasting the NFL performance of college quarterbacks is not surprising.  In sum, “mistakes” on draft day in the NFL simply reflect the immense complexity of the problem.

In the NBA, though, it is a very different story. Veteran NBA players – relative to what we see in the NFL – are far more consistent over time. And although we cannot predict future NBA performance on draft day perfectly, we certainly know something. Part of that “something” that we know is that NBA teams make mistakes by focusing on the “wrong” factors. To illustrate, let’s talk about Jeremy Lin.

Right now, people are wondering how a player like Lin could have been missed by NBA decision-makers. The research I published with Aju Fenn and Stacey Brook in the Journal of Productivity Analysis last year (research discussed in Stumbling On Wins

) might help some shed some light on this issue.

Our paper looked at the NBA draft from 1995 to 2009. The first issue we considered was which factors impacted where a player was drafted.  The following table (from Stumbling On Wins

What Explains Draft Position in the NBA?

In the above table we see that being able to rebound, avoid turnovers, and hit free throws doesn’t impact a player’s draft position. However, there were seven box score statistics that did matter.  Of these – as the following table (again, taken from Stumbling on Wins) notes – points scored had by far the largest impact on draft position. Such a result is consistent with past studies of free agent salaries, research on who gets cut from NBA teams, the voting for the All-Rookie team (by the NBA coaches), and the coaches’ allocation of minutes.  Yes, scoring dominates player evaluation in the NBA and the domination begins on draft night.

Given these results, let’s look at Jeremy Lin’s stats when his college career ended in 2010.  Here is what we knew about Lin at that point:

When we put the entire picture toge
ther, we should not be surprised that Lin wasn’t drafted.  After all, he was a relatively old player from a minor conference that didn’t excel at scoring.

Of course Lin’s performance with the Knicks suggests that decision back in 2010 wasn’t correct. Was there anything in Lin’s college performance that would suggest that Lin would be a productive NBA player? Before we get to those numbers, it should be emphasized that college numbers are not a crystal ball into a player’s pro career. However, they are much better at predicting performance than whatever methods the NBA employs when making choices in the draft.

Let’s start with a summary of Lin’s numbers. Wins in basketball are primarily about shooting efficiency (i.e. the ability to put the ball in the basket), and your ability to gain and keep possession of the ball (i.e. rebounds, steals, and turnovers).  The importance of these factors drives the calculation of Wins Produced.  This model can be simplified into Win Score, which is calculated as follows:

Now what factors don’t matter? We found that a player’s height, age, and other box score numbers are not associated with more NBA production later on. In addition, appearing in the Final Four – a factor that clearly impacts draft position – doesn’t suggest higher production in the future.  In sum, what Lin didn’t have in 2010 wasn’t related to his future NBA prospects.  Consequently – contrary to what people in the NBA thought back in 2010 — people outside the NBA argued (again, back in 2010) that Lin might be worth a look.

The last team to overlook Lin was the Houston Rockets — they cut Lin back in December.  At that time, the point guard the Rockets decided to keep was Jonny Flynn.  Back in 2009, Flynn – after posting a 4.7 WS40 at Syracuse in 2008-09 (that is a below average mark) — was the 6th player taken in the NBA draft.  As of last December, Flynn had played more than 3,300 minutes in the NBA and again posted below average numbers. Despite all this evidence that Flynn is not an above average basketball player, the Rockets kept Flynn over Lin.

What explain this “Flynnsanity”?  Not only do NBA decision-makers focus on the wrong issues on the NBA draft, they also are slow to let these decisions go.  A player’s draft position impacts minutes played – even after we control for performance – several years into a player’s career.  So it’s not surprising that Flynn – who did not play well in college or in the NBA – was chosen by the Rockets over Lin. Flynn was supposed to be a star in college. He was supposed to be a star when he was drafted. And I am sure, people still believe Flynn may someday be a star in the NBA.

But given the consistency of NBA performance, it seems unlikely Flynn will ever be a star. And although the sample is still quite small, we now have even more evidence that Lin – contrary to what was thought by many (but not all) back in 2010 — will be a productive NBA player.

All this tells us is that although it’s much easier to evaluate talent in the NBA than the NFL, the results for teams in both leagues appear to be the same. And until decision makers in the NBA can do a better job of focusing on what matters – and ignoring what doesn’t – decisions in the NBA are likely to continue to look very much like what we see in the NFL.