The Wealth Effect: It Ain't Pretty 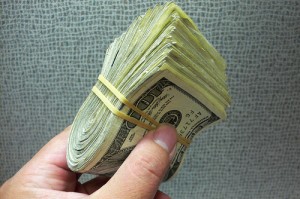 A fascinating Boston Globe article by Britt Peterson reviews the research on the far-reaching psychological effects of wealth. “Rich people have a harder time connecting with others, showing less empathy to the extent of dehumanizing those who are different from them,” writes Peterson. “They are less charitable and generous. They are less likely to help someone in trouble.”  Even more depressing: These traits are “developed,”  not “inherited.”

While money may not be the root of all evil, it can make people “insensitive” according to Kathleen Vohs, one of the researchers whose work was profiled in the article. “When people are reminded of money, they get better at pursing their personal goals,” she explains. “On the negative side, they become poor at interpersonal functioning. They’re not all that nice to be around. They’re not openly mean or disagreeable, but they can be insensitive.”

Also discussed in the article: research from Michael Kraus, Paul Piff, and Dacher Keltner which finds that lower-status people are more compassionate. “If your world is more unpredictable and threatening, and the police are more likely to arrest you, and you’re more likely to go to schools that don’t have the right kinds of resources, you’re going to be more attuned to the context around you,” explains Keltner. “And if [lower-status people are] more attuned to the environment and they’re tracking other people, it turns out they’re more compassionate, too, even at the physiological level.”

From personal experience, I would say that getting ahead requires true sacrifice. Whether in time, effort, or delayed gratification. I do look askance, sometimes, at people who want things without making the same sacrifices I have made.

I got this lesson driven home first-hand at the tender age of 15, many decades ago. As a fledging member of "Junior Achievement" (not even sure if it exists anymore, but loved the parody of it in "Risky Business") we had some shoddy product we needed to sell. We started in the wealthier burbs, figuring those people had cash aplently to spare and the $5 or so we wanted would be pocket change. But no sales! It was only when we went to the blue collar neighborhoods that people took pity on us and bought; it was several years before I realized that $5 in the day was $5 less they had to spend on something they actually wanted for themselves, and what they instead wanted was to help us. A lesson that has resonated with me to this day.

Just an anecdote to add to your story--I spent many years waitressing and bartending to put myself through college and grad school, and my general observation was that richer people tipped less than poorer. This wasn't always true, but it was true enough that my fellow waitstaffers and I would groan when a large party of fancy-dressed people came in. You'd work your butt off because they demanded constant attention--then they'd leave about 5% of the bill as a tip.

I made lots more money bartending at a working-class nightclub than at an upscale restaurant.

The best tippers of all were fellow waitresses and bartenders--not surprising in terms of the empathy factor.

The correct wording is, "For the LOVE of money is the root of all evil..." Big difference considering the topic of this post.

as a rags to riches individual I have noticed a change in me that of disconnectedness
the richer you are it does seem you are less charitable in my personal experience
not that I am not charitable ive noticed a trend of compassion when I was down trodden
one the rich never helped me with a thing while a guy who barely had a pot to piss in
was vary giving...I have been homeless at times so I have seen the vary bottom of things
and the article hits it on the nail

This is so refreshing to see, great comments. Although we can sit here all day and debate about politics. I have learned a long time ago that Dems/Reps are really two sides of the same coin.