My Target-Date Fund Is Bigger Than Yours 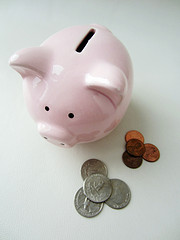 We’ve banged the drum quite a bit on the need for greater financial literacy. If you care about such things, you might want to take a look at a new working paper by Pierluigi Balduzzi and Jonathan Reuter called “Heterogeneity in Target-Date Funds and the Pension Protection Act of 2006” (abstract; PDF).

That isn’t the sexiest title ever, and if you don’t care at all about personal finance or investing then you probably shouldn’t go near it. But if you care even a little bit, the paper has some interesting lessons even beyond the fairly narrow focus of Target-Date Funds.

A Target-Date Fund is, in a nutshell, a mutual fund whose asset allocation automatically shifts over time as the target date approaches. Let’s say you’re saving for retirement and you have a pot of money (x) that you’d like to grow into a much larger pot (3x, or even 10x). If retirement is 30 years away, most people agree it makes sense to invest your pot in relatively risky investments like growth stocks from the U.S. and abroad. But most people also agree that as your target date gets nearer, you should gradually downshift your asset allocation so that you lock in your gains (hopefully!) and preserve your capital by investing more in bonds and other safer instruments.

That makes sense, doesn’t it? However, doing all that work for yourself can require a) more knowledge than many investors have, or want to have; and b) a significant time investment, both in researching your options and executing your reallocation.

Enter the Target-Date Fund. It does all the re-allocation work for you, automatically. It’s an idea that, as Balduzzi and Reuter’s paper tells us, was introduced by Wells Fargo in 1994. It proved so popular, they write, that it led “the Department of Labor, through the Pension Protection Act of 2006 (PPA), to encourage firms to use TDFs as default investment vehicles in employer-sponsored defined contribution retirement plans.”

Depending on your feeling toward governments getting involved in personal finance, you might either think a) that’s great that the government saw a good thing for investors and worked to spread the word; or b) what a ridiculous thing for the government to spend time and money pushing its preferences upon individual investors.

That said, how have things worked out?

According to Balduzzi and Reuter, the results are mixed:

To the extent that TDFs have exposure to equities and automatically reduce the equity exposure as investors age, they are an improvement as default investments in retirement plans relative to money market funds and traditional balanced funds. That is the good news. The bad news is that we document pronounced heterogeneity in the TDF universe: TDFs with the same target date have delivered very different returns to investors. This heterogeneity has increased over time, especially after the passage of the PPA of 2006. Indeed, we can attribute the increased heterogeneity to the entry of new mutual fund families in the TDF market during the 2007-2009 period.

And we’re not talking just a little bit of variance, either:

Consider the 68 TDFs with target dates of 2015 or 2020 in 2009. The average annual return was 25.1%, the cross-sectional standard deviation was 4.4%, and the range (the difference between the maximum and minimum return) was 23.5%. Some investors earned an annual return of 35.4% while other investors, investing in a TDF with the same target date, only earned 12.0%. … Turning to asset allocations, the average allocation to bonds and cash was 35.3%, with a standard deviation of 16.2%, and a range of 104.4%. Our findings demonstrate that TDFs with similar target dates can follow significantly different investment strategies. If regulators assumed that TDFs with the same target date provide investors with similar exposure to risk, the assumption is questionable.

There are at least two important stories told in this paper:

1. A measure intended to help amateur investors may end up hurting them by enticing them to believe that one fund labeled as a TDF is essentially the same as any other, whereas in fact the returns may differ greatly.

2. People respond to incentives — for better for worse, in manifest and in unexpected ways — and so while it may not surprise some people that a piece of legislation warped the markets in an unintended direction, it’s worth keeping in mind the next time Congress tries to help change investors’ preferences.

I think the issue here is that TDF is not well defined, not that legislation warped the markets. If all TDF had the same allocations, returns would be the same.

The legislation appears to be excellent "Nudge"-style lawmaking.

This 2010 EDHEC-Risk paper by Martellini and Milhau also made the case that deterministic allocations to stocks vs bonds (i.e., a predefined 'glide path' reducing equity exposure as maturity approaches) was a big hindrance on most current target date funds' performance and risk management capabilities.

Not surprising (certainly not to me because my 401K is with one firm, and my IRA with another).

Experts do not agree on the standard percentage by age in stocks versus bonds. They do not agree on bond maturities or risk profiles. Similar variation in expert opinion occurs with stocks. Expense ratios vary.

A TDF is not an index fund.

Why we have arrived at TDFs really goes back to a history of pension plans.

This all was a good thing for employers until they discovered that their employees were not participating in their 401(k) plans, were contributing too little to their 401(k) plans, and were making bad investment decisions (were investing too conservatively missing out on the higher return of more risky investments). Now employers were at risk of having employees not be financially able to retire, and thus employers were at risk of having older employees continue to work well past their most productive years. Further the government was at risk of having more impoverished elderly in need of welfare and other forms of government assistance. Thus it was in both the government and employers interest to improve the performance of 401(k) pans. The most effective ways to increase participation and contribution was to change the automatic default for all employees from non-participation/ 0% contribution to become automatic participation in and automatic (or even increasing) contribution to their 401(k) plans. We have seen the design of this new plan administrative feature become more common in 401(k) plans over the last 15 years. Part of the problem with automatic participation and automatic contributions is selecting how to automatically elect investment choices. Further there was a push to try to move participants away from electing conservative fixed income options towards choosing more aggressive balanced choices such as those that a fund manager would make. TDF funds have seemed to provide an answer to both of these problems. But like mutual funds or even the choice between funds tracking different market indexes (index funds), not all funds are invested in the same securities, and thus funds have varying return.