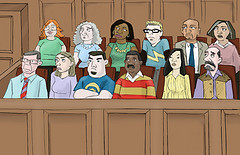 A fair trial is harder to come by than you might think. A few years ago, we wrote about a paper (ungated version here) by Shamena Anwar, Patrick Bayer, and Randi Hjalmarsson which found that “all-white juries acquit whites more often and are less favorable to black versus white defendants when compared to juries with at least one black member.”

Now, a new working paper by the same trio has more bad news:

[P]rosecutors are more likely to use their peremptory challenges to exclude younger members of the jury pool, while defense attorneys exclude older potential jurors. Having established that age has an important role in jury selection, the paper employs a research design that isolates the effect of the random variation in the age composition of the pool of eligible jurors called for jury duty to examine the causal impact of age on trial outcomes. Consistent with the jury selection patterns, the empirical evidence implies that older jurors are indeed more likely to convict.

The authors go on to discuss one possible solution: removing age-based peremptory challenges. “However, removing age-based peremptory challenges would also increase the variance of the average age of the seated jury – by about 13 percent in our sample,” they write.  “And, because juror age has a causal effect on trial outcomes, this would, in turn, increase the variation in the outcomes in trials with comparable cases.”  The authors suggest increasing jury size to balance out the effects of removing age-based challenges: “[I]ncreasing the jury size in Florida from six to eight would reduce the variance of the age of seated juries enough to offset the increased variance due to the random seating of jurors.”

Maybe that is because older people are less likely to be bamboozled by a charismatic lawyer or sympathetic defendant.

A better topic for discussion would be are ther better alternatives to the jury system.

"I'm the real victim here, because my Mom didn't buy me an X-box, so I had to steal one." doesn't work on them?

Yeah, but “He’s clearly guilty cos he’s a young’un and all the kids these days are degenerates who never had any discipline, not like we did in our days, but the important thing is, is that I had an onion on my belt, which was the style at the time. . .” sure does.

In my quick read through the paper, there was no data on convictions that were later overturned. If older juries are more likely to convict in error, that's a problem, but there is no indication of that in the data presented. As other posters have stated, this result could be spun in different ways. The fact that conviction rates are statistically significant indicates that the groups are different, but should not be used for inferring that one group or the other is doing something 'wrong'.

Jury decisions are generally not overturned or questioned by later courts. While there are some specific ways to challenge a jury's findings, they are limited and an appeals court is loathe to find that a jury was wrong to convict.

Almost all appeals in criminal matters tend to be based on "procedural" problems, such as improper jury instructions, allowing the jury to become prejudiced via inadmissible evidence, (in)competence of counsel, etc.

It would therefore not matter whether the conviction was overturned or not, because overturning a conviction only very rarely involves finding that the jury was actually wrong. The only place this really happens is at the time the verdict is read, the attorneys can move for a directed verdict, or the judge may grant a directed verdict sua sponte. But these are very rare, and it's unlikely that there would be enough of them to make a statistically significant judgment. Further, because it's generally applied in the context of a Judgment as a Matter of Law, it also has less to do with questioning the finding of fact of the jury, and more to do with the application of the law to the facts, which again gets away from finding that the jury was "wrong."

In my experience serving on juries I'd say older people tend to be more confident about their conclusions but no more likely to be rational or to agree with each other. What is interesting is how different people approach evidence, some are convinced they can tell when someone is lying, others put special weight on their own experience or specialized knowledge no matter how tenuously it can be applied. Overall my conclusion is I wouldn't want to be tried by a jury unless it was obvious to any rational person I was guilty, then with the jury and a (good?) lawyer I'd have a chance of getting off.

What tripe, let the system do it's best to conform too the standards that we have always used. Use the challenges as the atty's see fit. Why must some egghead always suggest a better way to do this or that? They changed the height of the pitchers mound to give the batter a better chance, then the AL came up with the DH. What will we change next to give this side a better chance or hinder the opposition. Will our sillyness will never end.

I once served on a grand jury, where I got to see about 500 different felony cases covering everything from aggravated DUI to 1st degree murder. Only about 3 of us (out of 15) were under 50, mainly because non-retirees would usually claim financial hardship during the selection process. Most employers won't pay you for missing four months of work.

Anyway, I did sometimes find it shocking how easy it was for an indictment to sail through. We voted to indict in all but one case, and aside from that one case, I don't think half the jurors ever voted not to indict. Most of the objections definitely came from the younger jurors.

This study confirms my own observations as a prosecutor. The causes were, I thought, related. Younger jurors are more idealistic, so the jury instructions on the presumption of innocence and reasonable doubt set the bar higher for the prosecution. Older jurors had more experience with being lied to. So a defendant's proclamation of innocence, without more, carried less force.

It has been my experience that young jurors tend to be pro prosecution except in drug cases. Viet Nam era jurors seem to be the least likely to convict.

Or a racially biased prosecutor or judge, or a overly dramatic and mistaken complaining witness.