What If It Rained on the Tea Party Parade? 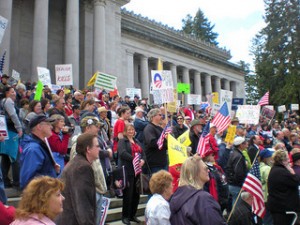 My latest Bloomberg View column with Betsey is all about the Tea Party.  Well, actually, it’s really about some superb research about the Tea Party, by Andreas Madestam, Daniel Shoag, Stan Veuger and David Yanagizawa-Drott.  Their big question: “Do Political Protests Matter? Evidence from the Tea Party.”  We know that lots of people turn out to Tea Party rallies. But does it really change anything?

It’s a remarkably difficult question to answer.  To see why, think about an analogy: Fenway Park gets big crowds whenever the Red Sox are winning.  Is this because they Red Sox players perform better with a big crowd, or is it simply that a winning team generates fan excitement?  Likewise, the Tea Party has attracted big crowds to their rallies.  But is this mass protest movement a cause or an effect of political foment among their fans?

To disentangle these possibilities, the authors cleverly analyze a very neat natural experiment.  The Tea Party was effectively born on Tax Day—April 15, 2009.  In some counties sunny skies encouraged large and boisterous rallies.  In others, rain suppressed attendance.  Comparisons of the political evolution over time of counties where it rained with those where it didn’t, reveal the effects of mobilizing these extra activists.

Their research demonstrates that in politics, success begets success. The initial boost from the weather generated substantial momentum. Counties that enjoyed better weather on tax day had more people sign up to become Tea Party organizers, greater donations to an affiliated political action committee, and larger rallies a year later.

Rallies are one thing. Real political influence is another.

What’s more, the Tea Party experiment shows that the activism catalyzed by those sunny days translates into real political influence. Politicians whose districts were sunny on tax day voted in a more reliably conservative fashion throughout 2009 and 2010. Indeed, the absence of rain in a congressional district on April 15, 2009, made its representative 8.7 percentage points more likely to vote against the Affordable Care Act. Had the weather at those early rallies been sunnier, it’s possible that Obama’s signature legislation wouldn’t have passed.

And the effects of the weather on that one day were also felt at the ballot box:

The Tea Party also changed the makeup of Congress. Sunny days — and thus large rallies in 2009 — led to greater Republican turnout and slightly weaker Democratic participation in the 2010 midterm elections. This boosted the Republican vote share by almost three percentage points in the affected districts. There was even some impact before Election Day: Several Democratic incumbents, seeing the writing on the wall, decided not to seek re-election.

It’s amazing how something as random as the weather on a particular day can have such far-reaching consequences.  The authors also tell that as the Occupy movement tried to make a splash beyond Zuccotti Park, the weather also shaped the success of their protests.  Hopefully they’ll follow up with another paper that tells us whether that movement was also as effective.  But that will need to wait until we know the results of the 2012 elections.

There’s already some suggestive evidence that the Tea Party has had a big effect on the Republican primary race.  And Mitt Romney should feel lucky.  He eked out close—and pivotal—victories in Ohio and Michigan.  In both states, rainy skies on April 15 2009 which likely muted the strength of his Tea Party-supported opponents.

You can read the whole piece here.

There's probably a geographical correlation of whether it rained on Tax Day 2009, which could be a compounding factor. (Maybe the authors already controlled for this.)

If you click through to the paper, you can see that the districts studied had similar voting records in 2008. In 2010 Republicans gained an average of 9,000 votes if their district had good weather on April 15, 2009, but didn't gain any votes if they had poor weather on that day.

I should have RTFP. Thanks for checking.

More interesting evidence of the randomness of success....

It seems like the authors may have missed one other factor though. What if places that are sunnier in April (for instance the South or the desert West) just happened to be more conservative to begin with? Why not look at a simple red/blue map of the US and look at sunny days in April. Would the effect found by the authors still show up?

You just need to look at a red/blue voting map on the county level .
i.e. http://www.cnn.com/ELECTION/2010/results/main.results/#val=H
For it to be obvious that, that shouldn't be a concern.
As with most US elections, the far majority of counties vote Republican/ Conservative. it is pretty much only a few counties which vote Democratic/Liberal. Those counties are pretty much concentrated cities.
Another good map to look at is a county map from the 2008 Pres election in 3-D http://www.washingtonpost.com/wp-srv/politics/interactives/campaign08/election/uscounties.html

Could it be that the counties where it was sunny were disproportionately in Arizona, Nevada,Texas and other places where the population is conservative?

Does the study control for typical weather in an area? If not, I would imagine conservative politics correlate strongly with sunny weather on a regional basis alone (i.e. the South)

And now that I refresh, I see this has been mentioned by other commenters. Whoops

Political hacks have known this for decades. A good political hack can tell you which age groups will show up in which districts given the weather. They can also tell you who those people vote (or don't vote) for.

In other news, it was very sunny and pleasant here last weekend. I didn't see any spontaneous demonstrations break out. Maybe it's not just the weather?

I also find it not so amazing that something like weather can have such a big influence on national legislation. The Social Security Act likely would not have passed if FDR hadn't decided to have the Blue Ridge parkway bypass TN.

Perhaps we should question the wisdom of passing sweeping legislation in single large packages. A series of smaller bills accomplishing the same thing would be unlikely to fall prey to the same odd influences.

What if there'd been a blizzard the night of the Boston Tea Party?

So... can we predict the presidential election results by combining this research data with the weathertrends360 weather prediction model for election day?

I also wonder how that would compare to the odds in Vegas...

I find it delicious that the third post after this there is a piece on the ease of finding statistical significance and the inability to forecast in the social sciences.

Looks like they used the exact same instrument as http://www.hks.harvard.edu/fs/dyanagi/Research/FourthOfJuly.pdf which used precipitation on the 4th of July to proxy attendance at parades and found that the more parades you went to as a child, the more likely you were to become a Republican. (Now that I look at it, Andreas Madestam and David Yanagizawa-Drott are authors of both papers, so not surprising at all.)

I can understand contemporaneous effects on voting from the weather, but saying that one day's weather has a significant, long term effect sounds like a pretty extraordinary claim. And you know what they say about extraordinary claims. I'll take this as an "isn't this nifty" result until someone with a whole lot more statistical knowledge than I have looks over the methodology skeptically and comments.