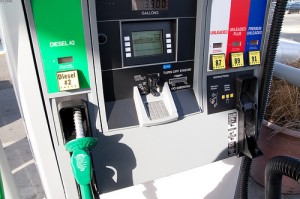 There’s a gas station near the Watergate Hotel in Washington, D.C. that famously sells very expensive gas. Reporters flock there for the standard sky-high gas price story, and residents have long suspected that the station doesn’t actually want to sell gas.

According to a Washington Post article, those residents have the right idea. Apparently, the pricing puzzle at this gas station boils down to a dispute between two gas moguls trying to oust each other:

The person who bought it three years ago is Eyob “Joe” Mamo, the gas station king of Washington, who is either a shining immigrant success story or a cutthroat monopolist.

Just because Mamo owns the station doesn’t mean he runs the station. It is operated by the same outfit that operated it in Exxon’s day: Metroil Inc., a company run by a man named Roland Joun.

Joun is unhappy that he was not offered the opportunity to buy the station and so he sued Exxon. He lost, appealed, then, just last month, lost the appeal. Joun has a contract to operate the station and must buy his gas from Mamo.

Says Mamo: “In my opinion, in protest of the fact that he did not buy the station he jacked up the price significantly.”

And then I do hear from Roland Joun, who tells me Dan Gilligan is right: He doesn’t want to sell much gas. Joun is locked in a mortal struggle with Mamo, whom he accuses of jacking up the wholesale price he must pay. (Mamo denies this.)

Joun says the more gas he sells, the more money he loses.

If Mamo isn't capable of firing Metroil and running the station himself, in what sense does he "own" it?

The top rated comment on the Washington Post link pretty much sums up what is going on:

1. Man has contract to sell gasoline bought from station owner which would amount to a "loss-leader.".
2. Man is making his profit from service and repairs on automobiles.
3. Man therefore tries to drive away gasoline customers with high prices.
4. Man gets an outrageous amount of free advertising from the media in general.

Assuming that it eventually gets sold, doesn't raising the prices high enough eventually mean making a profit on the gasoline?

Not really, he's probably referring to the fact that the landlord shares in the profits of the tenant. So if he sells a lot of gas, then the landlord is profiting. To protest, he needs to hurt the landlord's bottom line, therefore sell less gas. Commercial retail establishments commonly have a lease that offers a small fixed rent plus share in profits.

I drive by this gas station every day on the way to work and it's always been a mystery to me. Everyone seemed to have their own theory as to why it was so expensive, but my guess was that some service company (taxis, trucks, etc) had some ancient, exclusive, and extremely poorly written contract with the gas station that forced them to buy gas at whatever price the station named. Another theory was that they had no interest in selling gas, but thanks to some arcane DC zoning restriction, had to offer it to stay in business as a mechanic.

I feel liberated to know what the real story is...

So two grocery stores were having a milk price war....The price went down and down. Finally one store lowered its price to five cents a gallon and the other store responded by changing its price to FREE. They gave you a nickel to go across the street to buy your milk.

Bah...Dum. Be sure to tip the waitress.

One of my grandfathers had a gas/service station decades ago, and he jacked up his prices to the highest he was allowed specifically to avoid selling gasoline. It was really a repair shop, and he found that selling gas was an interruption. He also quit selling candy or other convenience-store kinds of things to discourage casual traffic. Bottled soda was available in a vending machine, and that was it. (It generally worked fairly well, except for visitors from California, who interpreted his prices as being a great deal.)

If he'd been able to get these modern pay-at-the-pump systems, so people can buy gas without ever seeing a human, he'd probably have made a different choice.