Markets in the Air 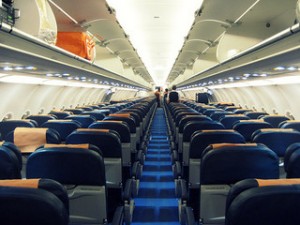 I stumbled on this nifty business idea, Nanny in the Clouds, to create a market in the air for nannies. Think match.com, but for wanna-be-nannies and parents on airplanes.

A clear market failure: people on flights with kids want some help; other people on flights want to make some money taking care of kids. Social norms don’t really allow for instantaneous markets to appear (“hey, for $10 I’ll watch your kid for the next two hours so that you can take a nap” is unlikely to get many takers, I suspect). But prearranged, where the norm adheres to our expectations in the babysitter market, and we have a market helping make trades otherwise not made.

Here is how it works: Sign up on the website, put in the flight you’re going to take, and see if any parents (nannies) signed up and are looking for a nanny (parent who wants a nanny) on the same flight. Negotiate your rates directly, and pay Nanny in the Clouds $10 if the match is made.

The problem, of course, is simple: unless it gets big, what are the odds you find a match? And how many failed attempts at a match do you put up with before you forget to keep checking the site (the site allowes you put in your flight and date and then be informed when a match is posted, so you don’t have to keep re-checking for any particular flight, but that doesn’t help you six months later when flying again). Anyhow, a nice example of a market failure (search costs too high, information isn’t free) potentially solved through a business process innovation.

Two thoughts — no doubt ones they have had: it seems that airlines would benefit as well from helping this happen, by letting people put this into their frequent flyer profiles so that matches occur without having to go to a second site for every flight. Or even better: by facilitating markets right at the gate (of course the $10 match fee would be harder to collect, and this could turn the gate area into a zoo, not something the airlines would like). What else can they do to get the necessary network size to make this work and still protect their revenue source?

The problem with this idea is that kids are the hardest on airplanes from age about 6 months to 18 months. At that age, many kids will not readily go to a babysitter they've never met before, so the whole situation isn't likely to work out as easily as it seems like it might. Once the kids are old enough to be fine with a babysitter, they're also old enough to watch a movie, read, color, play a game, etc. on their own, so the value of the nanny is substantially lower.

Here's another idea: Why not create a family section of the plane? We have first class and business class, why not family class? That puts all of the kids closer together, so the parents worry less about making noise and bothering fellow travelers who want peace and quiet. You're surrounded by other people who are more understanding of a kid who is having a hard time. As a parent who has flown with kids quite a few times, I feel like a big part of the stress of flying with kids is worrying that you're bothering everyone around you. I would pay extra for seats in family class, and I suspect that passengers who want to not be bothered by kids would also pay extra to sit far away from the family section. Just put the families way in the back, where it's noisy and stinks already!

I really like this idea. Although most parents will not pay extra to sit in a family section at the rear, because taking children already stretches the family budget, many would do so if the option were provided, and the section shrunk or swollen as demand dictates. For the airlines, the idea works because it saves time when the pre-board for families with young children places them at the rear of the airplane (it is always efficient to load from rear to front, ask anyone who works on a plane).

The reductions in loading time, fuel, and improved on-time departure/arrival rates would likely be small, but airlines know that small savings add up, and the first airline to introduce a family section would have a market advantage until others caught on.

Of course, there is a sad side-note to the idea: smokers used to be relegated to the rear of the plane, and now it will be families...

Okay, so in an emergency, the nanny thinks "They ain't my kids...I'm outa here."

Teh vast majority of people wouldn't use it since there's no way to determine quality. You'll be matched with someone going the same way you are, which might be a wonderful child-care professional, or might be a molester looking for opportunity. You just don't know, and if you add the cost of verification onto the effort required, it's not worth it.

I disagree. There are plenty of babysitting sites that have been successful and are able to provide background checks. I don't think the site is intended to be the craigslist of the sky but more of a sittercity of the sky

"Here is how it works: Sign up on the website, put in the flight you’re going to take, and see if any parents (nannies) signed up and are looking for a nanny (parent who wants a nanny) on the same flight."

Nice. Then when you return home, you can see how many burglars used the information to break into your empty house.

Ben makes the suggestion of a "family section" of the plane, where parents worry less about making noise. I've flown transatlantic on many occasions with my kids (usually, but not always, including a baby), and the single bad experience we've had on a plane has been a flight where we were surrounded by other families.

See, on a transatlantic flight, I need the kids to sleep, and on a plane which is generally fairly quiet, they go to sleep quite easily, without much grousing. On the horrific flight, we were seated close to about half a dozen other families with children. Everything is OK, until one child has a bad dream, a bowel movement or whatever, and wakes up screaming. His parents do all the right things, picking him up and calming him down, but in the mean time, his screams have woken some other children, who are now tired, cranky and screaming, and so all the kids wake up. Nobody got any sleep on that flight.

I think there must be a critical density of small children - below that number, everything's OK, above that number is a complete disaster.

(And given the choice, my 7 year old would sit in the quiet section, where she could read her book in peace...)

To be honest. I'd say this is not a good idea. I agree with the first commenter. It'd probably cost you more to get to the airport than the price of your ticket. You'd make more by having a long weekend daycare centre in the vicinity of an airport (and zoo). Thus leave the kids behind. Alternatively, the main reasons for kids crying are problems with sinuses, being tired and not being able to sleep, and boredom. Sinuses can (normally) be solved with candy, boredom could be solved by renting out an iPad. On long trips, it'd be nice with a nanny. Thus set up a parent sharing option with your plane ticket. If your flight is 5 hrs or more, set up an option whereby you and another couple can share child care for the flight.

In my humble opinion, kids shouldn't even be taken on the aircraft if they're young enough for this service to be needed. Especially the infants that aren't old enough to figure out or be told that yawning will relieve the pressure in their ears.

It's just like taking kids to fancy restaurants, nobody else should be paying top dollar to put up with your unruly or colicky children. You can always tell the grandparents to come to you or trade some babysitting time with other parents in a similar situation if you really want to get out.

I have twins, and when they were infants we had a great nanny that flew with us eveywhere. Her name was Benadryl.