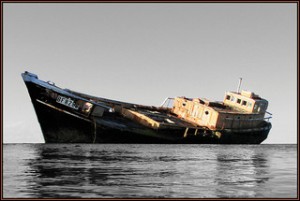 Here’s a new study to keep in mind if you go to see the 3D rerelease of James Cameron’s Titanic. Economist Mikael Elinder and Oscar Erixson analyzed data from 18 maritime disasters from 1852 to 2011, and found that the old wisdom of “women and children first” isn’t quite what happens. From the abstract:

Our results provide a new picture of maritime disasters. Women have a distinct survival disadvantage compared to men. Captains and crew survive at a significantly higher rate than passengers. We also find that the captain has the power to enforce normative behavior, that the gender gap in survival rates has declined, that women have a larger disadvantage in British shipwrecks, and that there seems to be no association between duration of a disaster and the impact of social norms. Taken together, our findings show that behavior in life-and-death situation is best captured by the expression ‘Every man for himself.’

The authors found that:

·         A powerful captain can increase the survival rate of women

·         Captains and crew survive at a significantly higher rate than passengers

" Captains and crew survive at a significantly higher rate than passengers "

They also know how to swim, unlike most passengers.

Hey feminists, I know you're out there, explain why women should go first?

Jack, I consider myself a feminist and no I do not see any reason for women to go first. However, considering the temperature of the water, anyone too weak to withstand it (which I realize is basically everyone) should have gone first. This means children, their parents, and the elderly. That's what I think, so don't go assuming feminists believe women should always come first, cause that's a real jack-ass assumption. Also don't assume all feminists think alike, we ARE individual people with individual thoughts and rationales.

Men are the vulnerable sex. Let's admit that. In the titanic incident, the figures don't lie! 92% second class men died, 14% women in second class. This has economic implications of orphaning of small children and unemployment and low living standards.

18 maritime disasters in 150 years?
18 is not that many samples to be making general statements.

Could also word the results differently, Like on British ships men fare better.

Experienced sailors have better survival rates in at sea disasters, than unexperienced laymen.

Perhaps throwing women and children offboard without proper time to assess the situation is to blame as well. Some men may note to themselves, "That water really is cold" or "Maybe I should try jumping off portside instead."

Isn't this true also of plane crashes - that men survive at a higher rate than women? And that this is essentially because men will tread on other people to get out whereas most women will not. Not sure whether this is social conditioning or just differing survival instinct.

I'm dubious. I guarantee Capt and Crew survive at higher rates because they're trained for disaster, they know where supplies will be located, they are likely the only ones who can operate certain lifesaving equipment (lowering boats, inflating vests, etc), and they know their way around a ship.

I'd also wager that the crew is exclusively or near-exclusively male.

In a biological sense, men are no longer necessary after passing on their genetic material to create the next generation. After that, men perform no fnuction that cannot be handled equally well, or better, by women.

You may say that this is an out-moded concept, and perhaps it is. But it is still the basic biological fact, and therefore the underlying reason for all societal 'gallantry' toward women and children.

To the extent that any society abandons that rule, it lessens itself in moral behaviour. Society is poorer and meaner without it.

Amanda Ripley, writer and author of "The Unthinkable: Who Survives When Disaster Strikes - and Why" has an interesting opinion about your post!

I served as a discussant for a previous version of this paper at the World Congress of the Public Choice Society. Read past the abstract and introduction and you will find that the authors discuss at length how "Women and Children First" has been (and was in the case of Titanic) enforced by some captains and crews.