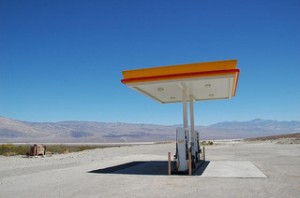 My father pointed out something interesting the other day – almost no one runs out of gas anymore. When gas was $0.60 a gallon, he maintains it happened all the time. Now that it’s $4.00, you almost never see it. I have vague memories of my father running out of gas when I was very young, but I’ve never done it. What changed? Are gas gauges different, allowing you some leeway? Or, like the drop in the prevalence of hitchhiking, is it a reflection of changes in our culture–we don’t have the time to run out of gas (even if we pay for a service like roadside assistance), and we don’t trust that some stranger will be helpful if we do?

Maybe it is just an illusion, but I think Becky is right that people don’t run out of gas the way they used to!  My father used to run out of gas from time to time, something I just cannot imagine doing myself.

What is especially surprising about people running out of gas less now, if it is true, is that the cost of running out of gas has plunged now that we carry cell phones.  If I ran out of gas now I could just call AAA.  When I was a kid, we would have to walk to the nearest gas station.

I don’t know the answer to Becky’s question, but I wonder if a big part of it is that now when you are low on fuel a light comes on.  In the cheap cars my parents drove when I was a kid, there was no indicator light, just the needle that pointed to empty.  My father considered it an art form to read when the car was really on empty versus when the gauge pointed to empty, but really still had a couple of gallons left.  Not that an indicator light should be much more useful than a fuel gauge pointing to empty, but it might somehow be more salient.

Does anyone have better answers to the question?