The Ongoing Battle Between Technology and Human Behavior 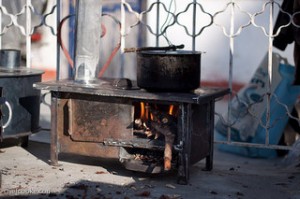 “It is conventional wisdom that it is possible to reduce exposure to indoor air pollution, improve health outcomes, and decrease greenhouse gas emissions in the rural areas of developing countries through the adoption of improved cooking stoves,” write Rema Hanna, Esther Duflo, and Michael Greenstone in their new working paper “Up in Smoke:  The Influence of Household Behavior on the Long-Run Impact of Improved Cooking Stoves” (abstract; Washington Post coverage).

But, as the scholars discovered, what seems like an obvious technology fix doesn’t always work. Because, remember, human behavior can be a lot harder to change than we think.

Or, put another way: bummer.

More from the paper’s abstract:

This belief [of new cookstoves leading to improvement] is largely supported by observational field studies and engineering or laboratory experiments.  However, we provide new evidence, from a randomized control trial conducted in rural Orissa, India (one of the poorest places in India), on the benefits of a commonly used improved stove that laboratory tests showed to reduce indoor air pollution and require less fuel.  We track households for up to four years after they received the stove.  While we find a meaningful reduction in smoke inhalation in the first year, there is no effect over longer time horizons.    We find no evidence of improvements in lung functioning or health and there is no change in fuel consumption (and presumably greenhouse gas emissions).  The difference between the laboratory and field findings appear to result from households’ revealed low valuation of the stoves.    Households failed to use the stoves regularly or appropriately, did not make the necessary investments to maintain them properly, and usage rates ultimately declined further over time.  More broadly, this study underscores the need to test environmental and health technologies in real-world settings where behavior may temper impacts, and to test them over a long enough horizon to understand how this behavioral effect evolves over time.

It is perhaps tempting to chalk up this failure to low education and the like, but I bet if we put our minds to it we could come up with plenty of examples in which highly educated and well-off people similarly fail to exploit the technology they are offered. Your thoughts?

The counter solution is to continue to refine the design of the stoves until they become a technology people WANT to use because it makes it easier for them to cook their food. Because humans look for the path of least resistance, proper design can harness that laziness instead of fighting against it.

I think every technology can take inspiration from iPhone. Look at how it changed our perception that we need a touch screen. More than half of world was better off with those buttons but iPhone changed our perceptions. Though iPhone has about only 33% of features currently offered by other phones still it is best product ever sold on planet. I think it's not about solving problems through technology it's about integrating technology in our lives. We shud look to use technology as tool not as outsourced agency to solve our problems.

Please substantiate your claims that the world is 'better off' without those buttons and that the iPhone only offers 33% of the features offered by 'other phones'. Please list which phones specifically.

Any chance this paper is available somewhere that's not behind a paywall? It sounds like an interesting paper, but not $5 of interesting.

I'd like to know the details of how behavior changed over time so that eventually the new stove was providing little to no benefit in air quality.

I haven't had time to read it in its entirety, though.

If you want people to use stoves, provide them with TVs. For people not used to modern conveniences, television is the first technology needed. TV is the ultimate propaganda delivery system, making viewers want the products advertised and showing them how and in what contexts to use the products should be used. TV's first, stoves second.

Yes! Get those people that make the "Snuggie" ads to make cookstove ads. Then run them continuously. It works in this country...

I think seatbelts were a good example. They were available in cars for decades and people still refused to us them. The auto industry first put buzzers in cars, then in the '80's they went so far as to have auotmatic selt belt systems. Air bags were designed so that they would protect an occupant who was NOT belted. The government has gone on to pass laws to fine people for not using seat belts.

Ever sign a long legal form without reading it? I wonder if all those regulations and additional disclosures do any good?

After any crisis the government enacts new legislation and consumers pay attention to disclosures, but after a few years no one bothers checking any more. And it is unlikely education has any bearing on helping consumers protect themselves.

"Diffusion of Innovations is a theory that seeks to explain how, why, and at what rate new ideas and technology spread through cultures."
http://en.wikipedia.org/wiki/Diffusion_of_innovations

First published by Everett Rogers in 1962.

It's an old example, but back when we had VCR's (video cassette recorders), I couldn't believe how many people were incapable of actually using them to record programs that were broadcast at an inconvenient time. They'd just use them to play prerecorded cassettes. (Actually, a lot of them never programmed the machines at all, so you'd see the digital clock forever blinking 0:00).

Wow! How'd you get yours to blink 0:00? Ours only ever blinked 12:00. I would have loved to see it blink something else.

I think the attitudes of the poor to these seemingly obvious solutions are well-illustrated in 'Poor Economics'. Contrary to popular belief, they approach these situations in much the same way as someone from an educated/high-income background. eg. women around me have been talking about getting vaccines for cervical cancer for some time now. We're aware of its benefits and fully understand the need for it. However, i don't know of anyone who's been vaccinated yet, including me!We all need a 'nudge' sometimes, even in the face of the most obvious fixes.

The auto industry first put buzzers in cars, then in the ’80?s they went so far as to have auotmatic selt belt systems. Air bags were designed so that they would protect an occupant who was not belted.http://www.kabbanet.ro

I know some non-profits that promote these new stoves have found that giving stoves to families at no cost results in them not valuing or using the stoves (which presents the challenge of how to make them accessible and affordable for very poor families, while still having the family invest in them by paying a small amount). I don't know if this study involved giving the stoves for free, but I would imagine if it did that fact would contribute to the disuse of the new technology.