If you have been watching the NBA recently – and with the playoffs going on, you should be – you may have seen the following ad for Sprint:

Often people don’t pay attention to what people say in ads.  But this one – starring Kevin Durant of the Oklahoma City Thunder – has a very interesting opening line: “Man I was double-teamed.  With no one to pass it to, so I pulled up and hit the shot for the win…” 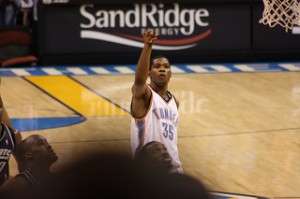 Let’s think about this for the moment. Durant says he has two defenders on him (i.e. he is double-teamed).  That means – if the other team is playing the standard five players, there are three more defenders on the court. And if Durant has four teammates on the court (and that would be standard), there must be someone open. But Durant says that there is no one to pass it to.

If you watch closely, Durant isn’t really double-teamed.   But the words still seem quite revealing of something we noted in Stumbling On Wins

(and The Wages of Wins

, and in academic articles, and… okay, I said this a few times before).  NBA players are primarily paid to score.  So although Durant had to have someone open, he really doesn’t have much incentive to find that player. Players get paid more when they take the shot.  Having their teammate take a shot – even if it is an open shot – may help the team win the game, but it doesn’t always help an individual player get paid.

Now in Durant’s case, it is often true that he is one of the best options on the Thunder (although probably not if he was really double-teamed).  And Durant is actually above average – for a small forward – with respect to assists (so he does pass the ball).

There is another Thunder player, though, who Durant appears to be impersonating.

During the regular season, Russell Westbrook finished 5th in the NBA in points scored per game (Durant finished first). Although this scoring mark might seem impressive, when one delves a bit deeper we see that of the six players to log 1,000 minutes for the Thunder this year, Westbrook was 6th in effective field goal percentage (field goal percentage from the field that adjusts for the impact of three-point shooting).  And he was only 5th in true shooting percentage (this percentage adjusts from both three-point and free throw shooting).  Furthermore, relative to an average point guard, Westbrook was… well, about average with respect to shooting efficiency (he was also below average – for a point guard – with respect to assists).

In contrast, Durant – relative to an average small forward – was well above average with respect to shooting efficiency.  And James Harden  — relative to an average shooting guard – was just amazing.  Whereas the average two-guard has an effective field goal percentage of 48.2%, Harden posted a mark of 58.2% (or 10 points higher). Per game, though, Westbrook took nine more shots from the field than Harden.

Now who would make such a decision?  Who would think it is a good idea to have Westbrook – with an effective field goal percentage of 48.1% — take nine more shots per game than Harden?  Well, Westbrook is the Thunder’s point guard.  So many possessions begin with Westbrook having the ball.  And just like the Sprint commercial, often Westbrook – given the incentives he faces — probably can’t see anyone who is open. So therefore, he simply has to take the shot.  The means that Westbrook scores more points than Harden.  And it also means that Westbrook makes more money than Harden.

In fact, Westbrook signed a contract extension in January that reportedly will pay him the maximum salary allowed by the NBA’s Collective Bargaining Agreement.  One suspects that if Westbrook didn’t score so much – and he wouldn’t if he passed more to players like Harden – the Thunder would be even more impressive on the floor.  But Westbrook’s contract would be less impressive.  And so, it pays to believe in the NBA that “no one is open”.  Even if the mathematics of the game tell us that this probably isn’t true.

what about the effect of the beard?

Just because you are double teamed does not mean someone is "open". If two of your teammates are standing next to 1 defender neither one is open.

You know what else they aren't doing then, ryan? Playing basketball correctly.

But as PG, when the shot clock is running out and/or NO ONE is open, doesn't the responsibility for taking a bad shot more often fall to the PG. Someone has to try and "make something out of nothing".

It's not necessarily true that if Westbrook shot less, Harden would get those shots at his regular percentage.

Very true; plus Harden gets many more "wide open" shots that he can get set up for. All three of these guys are fun to watch. And, dont worry about Harden's paycheck. In the future, if he wants, he will get a huge contract to probably move to the point with another team.

Watch again. There was a secondary defender (Love, maybe?) backing off Durant as if he had come out to double team and/or got caught on a switch. He was still cutting off an angle. And, as others have pointed out, being double-teamed doesn't mean someone is "open" enough to pass to. Plus, it was a commercial. I'm all for in depth sports analysis but this is just silly and facile.

This is situational i think, because if the shot clock was not completely at zero then he could have passed the ball to the unguarded man. If someone is talented enough to be in the NBA i have faith that a man that does not have a defender on him will get open.

"One suspects that if Westbrook didn’t score so much – and he wouldn’t if he passed more to players like Harden – the Thunder would be even more impressive on the floor."

But what if Westbrook rebounded more? Wouldn't that help the team even more? I thought you've said over and over that rebounding was the most important box score number to figure out how many Wins Produced by a player???

The most important thing in Wins Produced, the stat that it is most responsive to, is efficient shooting. http://wagesofwins.com/faq/

"And another name for “responsiveness” is “elasticity” (a concept you may remember if you ever took Microeconomics). More specifically, we need to look at how a 1% change (or a 10% change or whatever percentage change you wish) in each factor impacts WP48."

Jesus, and I thought the comments section at Yahoo was a cesspool.

Nikola pekovic was 5th in effective fg percentage does that mean that kevin love should give him the ball more?....tyson chandler was 1st, so new york should run theyre offense through him?...the only guy in the top 10 for effective fg that is the first option on their team is LeBron so efg is also a product of getting good looks, if the shots were increased it would go down. OKC is winning stop hating on westbrook.