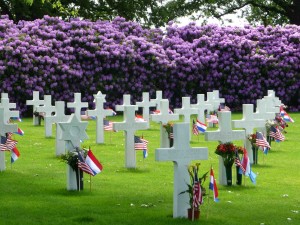 American Military Cemetery in Margraten, the Netherlands. May 27, 2012.

It’s a beautiful Memorial Day weekend, marked at the American Military Cemetery in Margraten, the Netherlands by American and Dutch flags on the graves.  There are many visitors, almost all Dutch, on this solemn occasion, with the only Americans apparently us and the U.S. military personnel here for the occasion.

The site brought to mind the commonality of culture and purpose that prevailed in America during World War II, and that many Americans seemed to feel again after 9/11.  The role of a common culture and mutual trust in facilitating the operation of markets by lowering transaction costs cannot be overestimated. Their effect on the civility of political discourse is also crucial.  It’s sad that we moved away so rapidly from that commonality so quickly after 9/11.