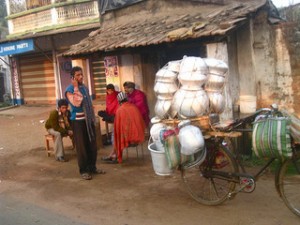 Is there a role for hope in poverty alleviation programs?  According to a recent speech by economist Esther Duflo, there is. Duflo looked at a BRAC program in West Bengal; program participants were given a “small productive asset” (a cow, a goat, or some chickens) and a small stipend to encourage participants not to immediately eat the animal. The results were significant:

Well after the financial help and hand-holding had stopped, the families of those who had been randomly chosen for the BRAC programme were eating 15% more, earning 20% more each month and skipping fewer meals than people in a comparison group. They were also saving a lot. The effects were so large and persistent that they could not be attributed to the direct effects of the grants: people could not have sold enough milk, eggs or meat to explain the income gains. Nor were they simply selling the assets (although some did).

Furthermore, the researchers found that recipients worked 28 per cent more hours and that their mental health improved.  Why was the program so successful?  Duflo thinks that optimism played a role.  “She argues that it provided these extremely poor people with the mental space to think about more than just scraping by. As well as finding more work in existing activities, like agricultural labour, they also started exploring new lines of work,” writes The Economist. “Ms Duflo reckons that an absence of hope had helped keep these people in penury; BRAC injected a dose of optimism.”