Tourist Drug Ban in the Netherlands 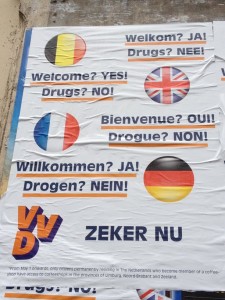 As of May 1, it is illegal for foreigners to buy soft drugs in three border provinces of the Netherlands. This new constraint is especially restrictive in Maastricht, which lies only 20 miles from the larger German city of Aachen and only 60 miles from Brussels, Belgium. Before May 1, foreign “drug tourists” flocked to the 14 “coffee houses” in the city, paying €3 or so for a joint and lighting up (since this activity is illegal in neighboring countries). In protest against the law, all 14 houses have closed.

While the law reduces industry demand, I doubt that it will mean the industry’s complete demise. I expect competition will lead some of the houses to reopen, while others will be closed permanently. The industry will be smaller — fewer firms serving fewer customers. Since I see no reason for average cost to change, surviving firms will look very much as they do now: small shops, each with the same size crowd as before. This does impose a cost on Dutch tokers: With fewer shops, they will have to travel further to toke up.