A Cheaper Way to Stop Malaria? 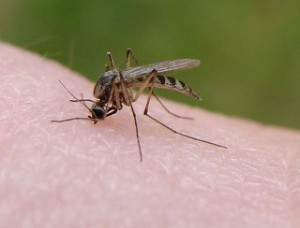 Scientists are working on genetically altering bugs  to eliminate the spread of diseases like malaria and the West Nile virus. A  Pacific Standard article describes the research:

Some researchers, including the Australians and groups at Johns Hopkins University in Baltimore, are smuggling a hitchhiking bacteria into the dengue-carrying mosquitoes that prevents them from passing on the virus. A British team is tinkering with DNA to either significantly reduce the lifespan of malaria-carrying mosquitoes (known as Anopheles) or kill females when they are just embryos. Either method would cause a population crash. In James’s lab in Southern California, scientists are working on similar techniques.

What these methods all share is the promise of blanket protection: they can theoretically kill or disable mosquitoes that insecticides miss—bugs nesting in hidden pools of water, for instance, or that lay eggs in storm drains or flower pots. What’s more, bioengineering bugs is relatively cheap and doesn’t require toxic pesticides.

Despite greens' concerns about bioengineering, it is very rare for a genetically-engineered or artificially-selected organism to be naturally selected over competing ones. Only in artificially altered environments such as herbicide-resistant crops planted in herbicide-rich fields or antibiotic-resistant germs in an antibiotic-rich pig are such things possible. Most of the time, when the environmental modification is removed, the wild-type organism returns to dominance. This is why minimizing use of antibiotics tends to mitigate the threat of antibiotic-resistant bugs. Producing a bacteria that expends energy to fight a human pathogen in an organism that is not killed by it may be enough to tip the scales in favor of more symbiotic or selfish bacteria that will crowd it out. Thus, don't bet the rent that this strategy will work unless you have a lot more information that is included in this article.

FTA: "Wolbachia is an innocuous microbe present in 70 percent of insects."
The real question in such a ubiquitous microbe is why it isn't more widespread in mosquitos already.

"Either method would cause a population crash."

Is that a HUMAN population crash. Many Zombie tales start exactly this way.

Well if they are going to all that trouble, can't they breed mosquitoes to remove the allergic reactions as well? I am curious how the "healthy" population will do once all the Malaria and West Nile carriers are gone. As much as i hate the little buggers, they do a good thing for the fish in Oregon.

Stopping transmission would seem a better bet than causing a population crash in such a numerous insect....

The local ecosystems must have very many creatures who depend on mosquitoes for food - what will happen to them and the ecosystem when you take out their food supply?

Local fish - a human food source - may well be impacted, as a previous poster noted.

The Miami New Times had an article on this 2 weeks ago:
http://www.miaminewtimes.com/2012-05-31/news/can-genetically-modified-mosquitoes-keep-dengue-fever-away-from-key-west/

As an economist I assume you're familiar with hidden costs right?

I wonder whether it destroys whole ecosystem. It can be that mosquitoes eat other harmful bacteria.

I saw an intriguing idea in a Sci-Fi novel, where the problem escalated in the southeast US, and they ended up with a "vaccine" that made human blood poisonous to the mosquitoes. I find that more plausible than genetic manipulation, but those scientists are a crafty bunch, so who knows.