How to Make a Better Athlete 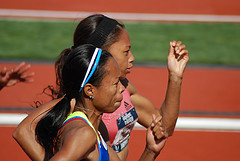 Olympic athletes have become increasingly reliant on scientists as advisers. A Wired article by Mark McClusky explores the efforts of sports scientists to improve athletic performance as gains have become harder to achieve. The Australian Institute of Sport is leading the charge; its success is best-demonstrated by an example from the skeleton, a sledding event that was recently reintroduced as an Olympic event:

They determined that one significant predictor of success had nothing to do with the sled itself or even the skill of the pilot. The faster a competitor pushed the sled through the 30-meter start zone before jumping on it, the better they performed. So researchers set up a national testing campaign, looking for women with backgrounds in competitive sports who excelled at the 30-meter sprint. They also evaluated candidates to see how well they responded to feedback and coaching. Eventually, they picked a group of 10 athletes—including track sprinters, a water skier, and several surf lifesavers, an Australian sport that requires sprinting through sand.

The athletes were given access to the best coaching, equipment, and sports science. Every training and competitive run was analyzed and dissected as coaches looked for places to improve start and steering techniques. Specialized strength and conditioning programs targeted the needs of the sport, especially explosive power and sprint speed.

The program was a success: An Australian racer qualified for the Olympics just 18 months after she first saw a sled. Amazingly, she had completed only 220 runs before qualifying. (A typical US skeleton racer makes upwards of 2,000 runs before appearing in the Olympics.)

If a sport that is arguably about sliding down an ice chute relies so much on the initial running start perhaps the timing point should be modified to take that out of the equation and focus on the parts that belong in the winter Olympics.

I could be wrong, (link is blocked at work) but the way I read it, it's not that the winning margin is all from the initial run, but that a faster initial run leads to faster sledding time. So if sledder A runs the 30 meter sprint a second faster than sledder B, then the winning margin wont just be that one second. Sledder A's will slide faster the rest of the race becasue of the quicker start time.

Didn't I see the same story in Cool Runnings?

I think these people really need to reflect on the definition of sport. It is, or should be, something done for fun, but where's the fun in this?

It's purely opinion, but for me the fun has always been the challenge. Both from your opponent and trying to improve yourself. So it's less fun in a happy, joyful way, than in a satisfying way.

Can't see it myself. From the description it's not all that much different from taking the old American Flyer sled out to the neighbors' hill, which was fun to do when I was a kid (and still is!), but larded with rules and requirements for special-purpose tracks & equipment, so that it becomes something only done in jingoistic pursuit of Olympic* medals.

*Is that a copyright violation?

It's not killing the fun, because for every lifesaver who takes up some dumb northern event, there's a sun-deprived northerner who's forced out of skeleton and into surf lifesaving.

Gains should be easy in obscure sports such as skeleton. I live in an area where winter Olympic sports are common and I don't know a single skeleton athlete. Next thing you know, there will be an Albanian revolution in the "sport" of curling. Show me the scientist who is improving downhill skiing with a person doing 220 runs and I'll be impressed.

Organized athletic competition will soon be obsolete. The contradiction of human sport events is there was always a machine that could do better. For hundreds of years we have struggled to make a level playing field but the fact there are winners and losers show that no playing field is level. Technology has gotten to a point where soon anyone can be engineered to be as good as any machine human size. So there will be no organized sports only scripted sports entertainment.

I don't think Skeleton is the best example to demonstrate an increasing reliance on science in sports.

So few people have access to this sport that it shouldn't be surprising that these few people aren't nearly as athletic as the typical Olympic athlete. Add some real athletes into the mix and its not that mind-shattering that results might improve.

I have a thought for the US track and field team. Abolish football and make all those 300-400lb linemen throw the shot put. And lets see how Kevin Durant would do in the high jump.

I'd expect the linemen would start looking a lot slimmer and Kevin Durant to have more visible muscles.