The Olympics and the Doctors 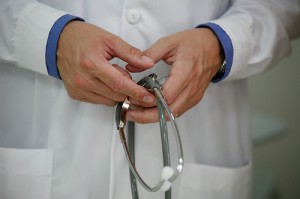 A New England Journal of Medicine article explores the history of the Olympic Games as an object of “medical scrutiny,” with some interesting highlights:

Physicians have been interested in the Olympics for many reasons. In the 1920s, they probed the limits of human physiology. One group studied the Yale heavyweight rowers who won gold in Paris. An ingenious contraption revealed that at their racing speed — 12 mph — the eight men produced four horsepower, a 20-fold increase over resting metabolism (1925). A 1937 study published in the Journal showed that athletes at the 1936 Berlin games consumed 7300 calories each day (1937).

Of course, physicians are currently most fascinated by the effects and progress of performance-enhancing drugs:

A Dutch physiologist wrote in the Journal that “the next Olympic Games have already been nicknamed the ‘Hematocrit Olympics,’” and physicians’ obligation seemed clear: “the medical profession has a responsibility to consider carefully these untoward consequences of scientific progress” (1991b).

Performance-enhancing drugs have cast a long shadow on the modern Olympics. Whether the agents are the strychnine, heroin, cocaine, and morphine that athletes used in Athens in 1896 or the amphetamines, steroids, and erythropoietin that some use today, the dilemma remains the same. As a sports medicine specialist noted in 2004, the “attraction of performance-enhancing drugs is simply that they permit the fulfillment of the mythical promise of boundless athletic performance — the hubristic ‘faster, higher, stronger’ motto of the Olympic Games” (2004). The ensuing systems of medical surveillance have led, inevitably, to “a new type of competition,” in which some athletes try to stay one step ahead of the authorities (2001).

The arms race will continue as medical science produces ever newer means of performance enhancement. Will future athletes try growth factors or gene therapy? One thing is certain: the Olympics will remain an object of medical fascination.

Who funds new performance enhancing drugs? Are they an off shoot of other drug technology and development.

As they say in NASCAR, if you ain't cheatin, you ain't tryin.