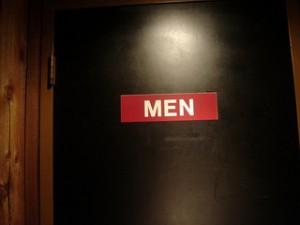 Among the conjectured causes of the recent U.S. financial crisis is the hyper-masculine culture of Wall Street that promotes extreme risk-taking. In two experiments, we found that threats to their manhood motivated men to take greater financial risks and favor immediate (vs. delayed) fiscal rewards. In Experiment 1, men placed larger bets during a gambling game after a gender threat as compared to men in an affirmation condition. In Experiment 2, after a gender threat, men pursued an immediate financial payoff rather than waiting for interest to accrue, but only if they believed their decision was public. When the decision was private, gender-threatened men did not show the same desire for immediate reward. These results suggest that gender threats may shift men’s financial decisions toward more risky and short-sighted public choices.

While the “manhood threats” employed in the experiment — product-testing a pink bottle of scented hand lotion and asking participants to “recall 10 examples of times they’d behaved like a ‘real man'” — are presumably quite different from those faced by men in banking/trading environments, the researchers believe their results have broader implications.  “Whether manhood threats were directly implicated in the recent financial crises that continue to plague the U.S. [and U.K.] economy, the current findings are at least consistent with such an interpretation,” they write. “Certainly, they are suggestive enough to warrant further investigation into this critically important question.”