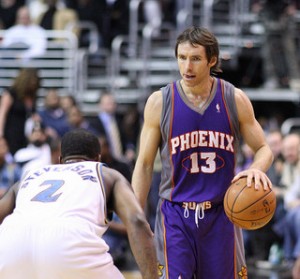 The NBA free agent market opened this month and the moves making headlines include:

And then there is the Dwight Howard saga.

Each of these stories appears to be summarized by a familiar line:

In fact, Gordon Monson (of the Salt Lake Tribune) wondered recently how the Utah Jazz – or any small market team — can possibly compete in today’s NBA.

Monson’s argument may seem like a familiar refrain for fans of small market teams.   For decades, fans of small market teams in baseball have watched their star players take the field for the New York Yankees (and other big market teams).  Economists would note that such movement makes sense.  Players can generate more revenue playing for large market teams, so we would expect large market teams to be willing to pay more money to the top players.   This explains why Alex Rodriguez might be worth $30 million to the New York Yankees, but A-Rod – even if he was the same player with the Royals – might not be worth that salary in Kansas City.

In the NBA, though, this story doesn’t quite work that way.  Back in 1999, the players and owners agreed to a maximum salary for individual players.  And this maximum salary was placed at a level that would allow any team to not only bid for the top talent, but make a substantial profit if the top talent would agree to play for their team.

To illustrate, let’s talk about the NBA’s upper class.   About 10% of the NBA’s players were paid at least $10 million this past season.   But surprisingly, a number of these players were actually underpaid.

Consider the admittedly crude methodology I employed in discussing the most overpaid NBA players with CNBC a few weeks ago.  The NBA paid its players about $1.9 billion last season to produce 990 regular season wins (quick note: players are paid for the regular season and the primary driver of revenue in the NBA is wins, not star power).  That means the NBA paid about $1.95 million per win last season.   Given the player’s statistical production on the court, we can measure how many wins each player produced (as explained at the Wages of Wins Journal, as well as in books and academic articles).

For example, last year LeBron James produced about 15.9 wins for the Miami Heat.  If each win was worth $1.95 million (again, a crude estimate) then LeBron should have been paid $30.9 million.  But his contract called for him to be paid only $16.0 million. That means – according to this analysis — LeBron was underpaid by nearly $15 million.  And that also means that any team in the NBA would be more than happy to employ LeBron at his current wage.

A similar story can be told by each of the players on the following list.  Of the players who earned at least $10 million last season (salary data taken from DraftExpress), these are the 10 most underpaid players.

As you can see, LeBron tops the list.  Further down the list we see Kevin Durant and Dwight Howard.  Each of these players played in small markets last year.  And each, despite a relatively high salary, was worth more to their respective small market team than the salary the player was paid.

If it isn’t the money, what’s driving Howard out of Orlando? It appears that Howard is following the same path as LeBron.  He is leaving the team that drafted him because he doesn’t believe he can win a title in Orlando.

In contrast, Durant appears to be staying in his small market.  He made this decision back in 2010, before the Thunder appeared to be title contenders.  And his faith appeared be rewarded when the Thunder made its first trip to the NBA Finals this year.

The behavior of both players illustrates a basic lesson taught in economics.  When one imposes a price ceiling – and that is what a cap on individual salaries is – resources must be allocated by something other than prices.

With respect to the NBA, the ceiling on salaries is causing the top players to allocate themselves according to one specific non-salary issue.  Again, consider the LeBron saga.   LeBron didn’t leave Cleveland because the Cavaliers couldn’t afford his services.  LeBron left Cleveland because he wanted to win a title (which he did).  Now it appears that Howard is following the same pattern.  And Durant’s ability to contend with the Thunder is probably part of the reason he appears to be happy in Oklahoma.

In essence, this story is similar to what we already see in college basketball.  Why do the top high school athletes flock to Kentucky every year?  It’s not because Lexington, Kentucky is a large market.  Players like John Wall, DeMarcus Cousins, Brandon Knight, Michael Kidd-Gilchrist, and Anthony Davis went to Kentucky because they had a chance to contend for a title.  A similar story is told about players who attend Duke, North Carolina, and Kansas.  None of these schools are in large markets.  But all provide a program that consistently competes for championships.

What we see in college basketball provides us with the blueprint Utah can follow.   Fans of the Jazz worry that when players like Derrick Favors (assuming he can develop into a productive “star”) reaches the end of his rookie deal (a deal that generally allows a team to significantly under-pay a player), he will bolt for a bigger market.  But as Oklahoma City has demonstrated, that doesn’t have to happen if the player thinks his current team can be successful.  And that can happen if a team simply finds a collection of players that help a “star” contend.

We have already seen how this didn’t happen in

In each instance, a team had a very productive player. But one player can’t win a title. You need other pieces to contend.  And the people leading these franchises clearly couldn’t identify enough pieces to make a title happen.

In contrast, the San Antonio Spurs – another small market team – keeps contending.  Even though Tim Duncan has slipped, the Spurs still had the best record in the NBA in 2011-12 because of players like Kawhi Leonard, Danny Green, Tony Parker, and Manu Ginobili.  None of these players were lottery picks. And Leonard and Green are hardly major scorers.   But all were quite productive for the Spurs last season.

The Jazz need to follow the example provided by the Spurs.  Identify a few non-stars who produce wins.  If you can do this, your stars – and your team — will win.  And then your “stars” will be