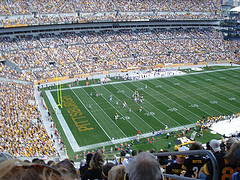 On Yahoo! Sports, the football writer Jason Cole profiles Todd Haley, the Pittsburgh native who has returned to his hometown Steelers (yeah, they’re my team too) to take over as offensive coordinator. Cole writes about Haley’s notorious “screaming jags” and wonders if Haley and Steelers quarterback Ben Roethlisberger can coexist:

Haley believes the outside world doesn’t understand the method to his madness. In previous stops, Haley was walking into rebuilding situations that required more attitude.

“The general public doesn’t know if that’s contrived or not contrived and over the years you have seen a lot of coaches who have shown emotion,” Haley said. “I take a great deal of pride in my passion for the game, but it was also what the situation dictated at the time.”

Okay, nothing so noteworthy about that. But then Haley reveals himself as a master of signaling theory:

On top of that, Haley joked, there is a personal factor that occasionally drives him over the edge. Of his five children, four are girls with the oldest at age 15.

I hear that Robin Hanson, a wise man in the realm of signaling, is writing a book, which I am eagerly awaiting. Sounds like Todd Haley won’t even need to read it.

may backfire: send a maniac to catch a maniac

Too bad Haley isn't a master at coaching football. For all his signaling, I've yet to see evidence that it has altered behavior in any significant or meaningful way.

I have worked for a boss or two who was prone to wild fits of apparent anger. Eventually, I discerned that it was a tactic. If a client called in the middle of a rant, he was able to turn it off in a second. Moreover, the tactic was used too often upon the helpless, such as secretaries. I lost respect for them after observing these things.

Everyone can lose their temper occasionally. But it should be authentic. Tactical temper tantrums are despicable and should not be given any quarter.

Having said that, an appropriate show of righteous indignation can be very effective. This is especially so when you are not known for fits of anger. Yes, it is a tactic -- but it is a fair use of the tactic. And it should always be controlled and brief.