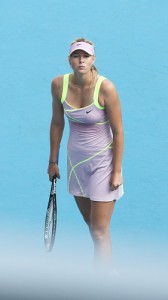 Their example is the Ladies Professional Golf Association (LPGA).  Better-looking golfers get lower scores (perform better) — but only going from average-lookers to the best-looking. Below the average, there’s no effect of differences in looks on tournament scores.  That makes sense — you probably won’t get more endorsement opportunities if you’re average-looking instead of bad-looking.  Although not golf, one might call this the Sharapova Effect. Are there other labor markets, or other activities, in which a similarly unusual synergy exists??