Is There Another Side to the "Hurricane Death Toll"? 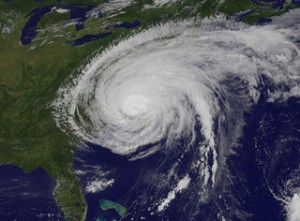 Miguel Sancho, a senior producer with ABC’s 20/20, writes in with a question I’ve often wondered myself but cannot answer. Can you?

A thought – every hurricane season we see headlines ascribing blame for lives lost on a given storm. “Hurricane Irene Blamed for Five Deaths in North Carolina,” etc. Certainly when people drown, are killed by floating debris, or die because they can’t make it to the hospital, the statistic sounds logical. But it occurred to me that perhaps, in the interests of fairness and accuracy, we should also give Hurricanes “credit” for lives not lost thanks to the interruption of normal human activity. How many homicides, vehicular fatalities, or drug overdoses didn’t happen [last] week in New Orleans, for example, because people were otherwise occupied protecting themselves from Hurricane Isaac? Just wondering if anyone has ever studied this, comparing average morbidity rates in hurricane zones to the stats during the times when hurricanes roll through.

This is not to suggest that overall, hurricanes are a social good. Bastiat’s broken-windows fallacy and all that. But perhaps in this one particular metric, we aren’t seeing the whole picture.

Please don’t judge Sancho’s observation as insensitive to the death and destruction caused by the hurricane itself. I can assure you he is not.

I looked into something like this several years ago but never wrote it up. Traffic fatalities go down significantly during hurricane watches and hurricane warnings. Not quite the same as a hurricane, but I imagine the effect is even more pronounced during the actual event. I don't remember how many fatalities were prevented, but my guess is that it will generally be larger than the five lives lost in this case.

This is typical of slanted left-leaning "journalism," including much of this blog.

While I agree with you in general, I don't see it in this instance.

You touch on one of the most important questions in risk management and one reason there's always a call for deregulation: You can't measure what didn't happen. All you can do is project based on what happened before your intervention or in the case mentioned in the article, your hurricane, then see what actually happened. There are statistical tests that can give the likelihood that the pattern you are observing after the intervention is different from what was happening before it but this is strictly probability. The same is true of regulation: You can't measure what didn't happen because of the regulations that are in place so after a while they begin to look like onerous requirements because the thing that prompted their establishment has not happened. This is a case where effectiveness will lead to repeal, then everyone is surprised when the thing that prompted passage of the regulation suddenly recurs. Glass-Segal, anyone?

The real problem is accounting for shifted (as opposed to prevented) "routine" fatalities. For example, all those people not driving to the grocery store due to the storm will result in more cars on the road after the storm getting their missed groceries. The same is true for many errands; they're delayed instead of cancelled. This bump in traffic could even potentially occur at the same time as storm clean-up is still ongoing. I hesitate to even venture a guess as to whether more or less fatalities ultimately result from 100% of normal traffic for 5 days or, say, 110%, 5%, 15%, 140%, and 130% of normal traffic on each of those days.

And on top of that there's the additional problem of deaths related to the aftermath. How many people get into fatal accidents they would have otherwise avoided while getting supplies to rebuild their homes or replace items that were lost in the storm? And how many people commit suicide after a hurricane destroys their lives?

Looting goes up for sure.

It was many years ago, but I remember hearing how the Beltway sniper, randomly shooting people, caused a decrease in the murder rate in DC. Not sure if it was actually true. But at that time DC was normally having over a murder a day, so it could very well be. The normal murderers were to scared to go out, and police were everywhere and everyone was looking, so fewer people were shot.

I recall a similar study about deaths during marathons that concluded that marathons (even ignoring the health effects to most participants) save lives as the reduced traffic fatalities from the congestion and closed roads surpassed the deaths on the course. Sorry I don't have a site.

I recall a similar argument about military deployments, at least as far as adjusting totals, not claiming a benefit. There are a substantial numbers of death by accident with troops at home.

An attempt to spin this was made in an email comparing military deaths under Clinton and Bush. Below is a Snopes link debunking it somewhat, but also linking to some factual numbers put out by the military.

It is an interesting thought. Please don't dislike me because I brought it up.

And as usual Nosybear has it right. But these would seem to be easy stats to collect.

My addition to this is: I wonder how many people didn't get killed in the strange few days after 9/11?

Or how many people got killed because they were driving instead of flying. Could go either way, I guess.

After Hurricane Andrew hit South Florida, things were in a bit of a mess (gross understatement intended). Some people were trying to credit Andrew with deaths that occurred WEEKS after the storm hit, for such things as accidents at intersections where the traffic lights still were not working...

Sorry, folks, but plain old stupidity killed those people, not the storm.

Although a little off base from what you ask, it should be noted that hurricanes are good for the economy in Florida. There is serious economic benefit from reduction of excess housing from the housing bubble, increased construction from repairs and roofing, and secondary benefits such as a boon to convenience stores and motels after the storm as construction workers need supplies and housing while rebuilding. We need a good hurricane to get Florida economy back on track. We have not benefiting from a storm for several years.

So, the quality of life could be seen as going up after a storm even if there were some loss of life during the storm. Maybe not a great trade-off but certainly something to think about.

One obvious benefit of minor disasters is that they do test the civilian response systems we put in place for disasters. As we saw with Katrina, there was clearly not enough review of prior disasters such as Hurricane Andrew in order to properly prepare for the next.

Frequently in IT a company only finds out its Disaster Recovery Plan is a failure only when it is put into action.

I suppose some of the deaths that are attributed to the storm may have happened anyway. Such as the guy who got a heart attack while trying to move a branch from the road.

We can use the formal risk management process to derive a quantitative answer on how many indirect deaths are caused by hurricanes. Conclusion: it is no contest, it is not even close. Hurricanes cause 100-1000 more deaths than they prevent. Here is why:
The leading causes of death in the US are heart attacks and strokes. Approximately 1 million to 2 million people die every year. Approximately 5 million to 8 million people suffer heart attacks or strokes every year but do not die because:
-they are in a venue where someone knows CPR and knows how to use a defillibrator,
-there is access to mobile ICUs,
-they can be taken to fully staffed health facilities with trained emergency personnel.

The next step is the probability of harm. This is the big one regarding a hurricane. All advances of the last 30 years that helped prevent death from heart attacks and strokes are negated by the fact that:
-vulnerable people are not in places where others might be able to help them with CPR or the use of defillibrators.
-roads are not easily navigable for mobile ICUs
-emergency health care staff cannot reach their facilities to take care of patients that do make it.

Bottomline: the death rate due to heart attacks and stroke reverts back to what it was over 30 years ago which is 3x today's rate or about 5-8 million x the geographic coverage % x the number of weather incident days.

Let me calculate roughly with your numbers.
Nationwide 2M deaths/year out of 400M population = 0.5% per year. The claim is the death rate would be 3 times higher without the tech stuff, so 1% per year are saved.

Assume the population disrupted by hurricane = 1M people. In normal circumstances, 1%=10,000 are saved per year by access to this care and technology.