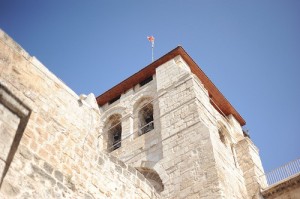 If you ever travel to Israel (which, BTW, is a phenomenal place to visit regardless of your attitudes toward religion or Middle Eastern politics), you’ll certainly see the Church of the Holy Sepulchre, built on what many believe is the site of Jesus’ crucifixion and burial. But you might come away a bit disappointed; the church has something of a disorganized and ramshackle feel.

The problem is not that the site isn’t considered sacred, but that it’s considered too sacred. Thanks to its obvious import, it is shared—and has been for thousands of years—by multiple religious denominations, including the Greek Orthodox, Roman Catholic, Coptic Orthodox, Armenian Apostolic, Ethiopian Orthodox and Syriac Orthodox sects. (Sorry, Protestants, since Luther’s 95 Theses were not posted until 1517 you are Johnny-come-latelys and don’t get a piece of the action.)

One might hope that this arrangement would not be a problem given the principles of Christian brotherliness. But this is not the case. Keeping order among so many squabbling sects, all of whom passionately claim authority over some or all of the structure, is no simple task.

To maintain a modicum of peace and sidestep the key issue of who owns what, the situation in the church has been almost completely frozen, stretching back for hundreds of years. The current arrangement, set in stone by the Ottoman sultan in 1853, codifies permission to worship in, and responsibilities for, parts of the church in excruciating detail based on traditions which have evolved (sometimes mysteriously) out of the mists of time. Virtually nothing can change. For example, a wooden ladder last used for maintenance no later than 1757 remains pointlessly in place because allowing somebody to touch it would imply that his sect has control over that area.

The slightest deviation from the status quo can cause mayhem. To give but a few recent examples: in 2002 a Greek monk had the temerity to move his chair from the sun to the shade, enraging the Ethiopians and causing in a brawl in which 11 were hospitalized. In 2004, a door being left ajar was taken as a slight by the Orthodox and a fist fight broke out among the various clerics. In 2008, the ejection of a Greek monk caused a fracas: even the police called to the scene to impose order were attacked by the enraged mob of priests. Another donnybrook, this time between Armenian and Greek monks, broke out a few months later.

Aside from the question of whether this behavior is appropriate for men and women who have devoted themselves to a religion of peace and love, the status quo arrangement has had troubling implications for the structure itself. Parts of the church are falling apart due to the inability of the parties to agree on how to complete desperately needed repairs.

Okay, I’m getting to what this has to do with transportation. In my opinion, this arrangement is a sorry metaphor for the reauthorization of the national transportation legislation, which was signed into law (and christened “MAP-21”) in early July.

In my last post, I wrote (without being ironic) about all the considerable positives involved with this law, the main one being that the two parties reached a broad, bipartisan agreement in this climate of extreme partisan rancor.

However, the new legislation hardly represents a triumph of legislative efficiency, let alone brotherly love. It took 10 stopgap extensions stretching over a period of almost four years to get an agreement on a “permanent” solution—which will be in force for only 27 months until the whole circus starts all over again.

Moreover, the legislation demonstrates that when an agreement is absolutely needed (neither party wanted to be held responsible for  the failure of a “jobs bill” in an election year), but in a climate of zero trust, the status quo principle is often the only thing that can get everybody onboard, for better or worse.

The problem with status quo agreements is obvious. As time marches on, the principles of these settlements become increasingly anachronistic, and nothing of import ultimately gets decided on.

To be fair, the new transportation legislation does include some reform. But all of the major, fundamental issues—including the amount of spending, the level of the gas taxes used to fund that spending, the distribution of the funds among the states, the proper balance between support for mass transit and roads, etc.—were simply frozen where they had been in the prior authorizing legislation, though certainly our needs must have changed in the last five years.

This kicks the can down the road on the key issues. One fundamental one is whether transportation should be paid for out of user fees, the most important one being the federal gas tax. Thanks to the fact that it is widely despised, the level of that tax has remained in place, at 18.4 cents a gallon, since 1993. But due to the effects of inflation, the real rate has been perpetually declining, down to today’s level of about 11.5 cents in 1993 dollars.

Most economists believe that economic actors should be required to pay for the full cost of what they consume. Indeed, they believe that travelers should not just pay for the visible services they require—the costs of maintaining roads and running mass transit systems—but for the invisible externalities they create, like air pollution or accidents that kill pedestrians. If these externalities are to be internalized, gas taxes should perhaps be a multiple of what they are today. Yet we are currently unable to add even a few measly pennies to cover even the explicit costs.

Funding transportation out of other revenues might have merit—perhaps transportation produces positive externalities which warrant this—but this should be settled through reasoned debate, not an agreement to keep the chair in the sun.

Another key issue the current legislation sidesteps is of even greater import. It’s the existential question of whether we should even have a large federal transportation program at all.

Fifty years ago it made sense to have a collaborative national effort to create an interstate highway network, but we are no longer involved in such grand enterprises. Today the vast majority of transportation programs have only local import, and it is questionable whether taxpayers in Vermont should be forced to fund a light rail project in Denver.

In the past, the federal program has meant fiscal transfers from “donor states” to “donees.” (Texas fares particularly poorly here while the good people of Alaska make out like bandits.) Due to the waxing non-transportation funding I just mentioned, the GAO now reports that all states are donees, getting more back from Washington than they put in in terms of fuel and other transportation-related taxes. But still, there are donees and donees, and some might consider interstate differences like this unjust.

To reduce the impact of this phenomenon, the rules permit no state to get significa
ntly less out of the program than it puts in. But if all states get out an amount roughly proportional to what they pay in, why even have a federal transportation program at all? Wouldn’t it be better to just let states keep their money to spend it as they see fit, without federal meddling?

These and other fundamental questions were not addressed in order to keep the brawls in the Capitol down to a minimum. But these issues aren’t going away, and not acting is in itself a form of choice. Hopefully at some point the parties will reach an agreement to at least consider these questions head on. If not, the status quo might mean bridges and highways crumbling like the Aedile in the Church of the Holy Sepulchre.