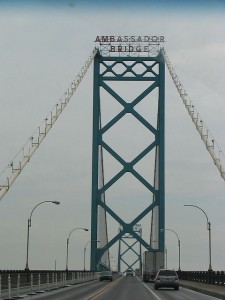 More than 25 per cent of trade between the U.S. and Canada goes over the Ambassador Bridge between Detroit and Windsor, Ontario. The bridge, built in 1929, has since 1979 been owned by one individual — Matty Moroun. He also owns duty-free stores and sells gasoline that escapes taxes. The Bridge isn’t quite a monopoly—there is also a tunnel; but the Bridge is more convenient for a lot of traffic.

Michigan has a constitutional amendment on the ballot requiring that any new bridge be approved by voters before state money is spent on it. Perhaps unsurprisingly, the Bridge owner is funding a large advertising campaign supporting the amendment. No monopolist likes to have the stream of monopoly profits diminished, which a new bridge would surely do. His political advertising is a smart move for him—a good way to ensure a continuing flow of profits.  Whether it’s good for Michigan, for U.S.-Canada trade and the well-being of the average North American consumer is questionable.  (HT to DJH)