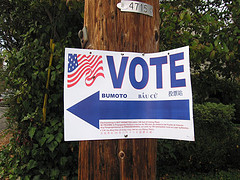 I was on the public-radio show Marketplace Tuesday evening, interviewed about waiting (sparked, I assume, by lines of people waiting to vote).  I never vote on Election Day and never have to wait to vote: I take advantage of Texas’s early voting, which is quick and easy. I estimate the opportunity cost of people waiting in line on Tuesday — the value of their time — was around $1 billion.  Those resources would have been much better spent creating facilities for early voting in all states. For that sum, a lot of election workers’ salaries could be paid and polling facilities could be kept open from late October through early November.  An additional virtue is that more people might vote, and expanding democracy would be a good thing.  Who couldn’t support this reallocation of resources?

My total time from leaving the house to vote to returning home was 8 minutes, most of it driving. But if I lived somewhere where I had to wait at all in line, I probably wouldn't vote.

Here in Florida, it costs 65 cents in postage to vote absentee , which is less than the gas to drive to the poll. A lot pf the early voting places have long lines also.

The media wouldn't support this. They get one huge night of polling craziness, and then they get to go back to their regularly scheduled programming. So all the people tuning in on Tuesday night wouldn't be tuning in, and the event would be spread across a much longer time horizon.

People would still watch TV because the counting would be done on Tuesday night.

It's clearly site-specific. Where we lived until recently in a small Texas town, early voting rarely had any line. Here in Charlotte NC, there are hundreds of folks in early voting lines every day, but on Election Day, I waited less than 5 minutes at my local polling place. So one has to determine the preferred options in each venue. The day can't be too far away that we can vote remotely, electronically. Time will tell whether that will be a good thing or not.

Where does the sum of one billion come from? Is it arbitrary or based on some real data?

I wait to vote, but usually go before the polls open so I spend no more than an hour putting my vote in. My polling station moved pretty quickly though. I got there after the polls opened and thought I might be there for a while but was still in and out in an hour almost exactly. The line to vote as I was leaving was even shorter than when I first arrived. As I left from work that evening, I noticed that the polling station had no line so those that came after me should have spent even less than an hour voting on that day, at least at my polling station.

To vote early, I would have to go to a county building about 30 minutes away (18 miles). My travel time to and from already equals the time I spent waiting to vote and since my polling place is on the way to work, there was no cost associated with travelling. In addition to the drive, I'd now have to park, locate the correct floor/room for voting, and wait (admittedly a much shorter amount of time), which would all probably add up to about 15 minutes. This trip would cost me an hour and fifteen minutes of time, about 2 gallons of gas (or 6.48 using the GSA rate) and potentially time away from work since I would have to get the vote in during their office business hours which are very similar to my office. I wonder if I'm in a unique situation or if many others do not sufficiently benefit from early voting in their areas. I lost no time from work. I drove about 40 yards total out of my way.

If we had to make additional facilities open for several months to accomodate those who would vote early, that seems like it would be an extra burden. As it is now, if you do it early, there is one place in the county which tries to juggle the influx with staff who are already working that day. Why would we want to set up additional locations to have to have more staff available for several weeks as opposed to one day?

For me, I'd like to see a faster voting process, but I don't think that extending early voting all over makes sense from a "time is money" financial perspective without seeing some estimates on how someone comes up with that scenario. So, where does one billion come?

> Why would we want to set up additional locations to have to have more staff available for several weeks as opposed to one day?

Also, they'd probably set up fewer polling sites, which means that almost everyone would have to travel further to vote. The number of polling stations is determined partly by the number of people you expect to show up. My area seems to run half as many polling locations for the primaries, and in my case, the change means that I can walk to the big elections but have to drive/compete for limited parking spaces for small ones.

That said, there might be a good reason to spread voting out over two or three days.

The value of people's time is notoriously mis-calculated. Opportunity cost is only a cost if you are actually forgoing AN OPPORTUNITY. Yes, I am sure that some people gave up wages from their job to go vote, on the other hand the vast majority of people were shifting one form of leisure activity to another. Moreover participating in the political process does return benefits to individuals in both monetary and non-monetary ways.

And what about the people who are working in line? I suspect that a lot of that time "wasted" in line was spent reading e-mail or talking on the phone. If I had expected a line, I'd probably have brought a book.

In practice, I walked to the polling station, there was no line, and my door-to-door total trip was probably less than 15 minutes, and part of that was spent talking to a neighbor.

Early voting in MD took me three hours on the Sunday just before Sandy hit. It was convenient in that I didn't have to miss work, but not quick by any means. It's new so I'm not sure if the long lines were due to Sandy or something else.

We need to fix these ridiculously long lines.

So we would charge people to pay for the expansion by determining 1. How much longer they would have waited 2. The value of their time. Then they can write the govt a check. The govt can implement the new system.

I didn't wait at all at 8 am at my polling place. And I am a stay at home mom, so if I did, my time is economically worthless. Early voting is readily available in my area and I don't choose to use it.

I wonder if most of the people wasting their time really chose to use time that would have been productive. Or did they cut into their leisure time to vote? How is that determined?

Personally, I have never understood why election day is not a holiday. My expectation is that our productivity is not all that high on election day with the level of energy put into election. Between "water cooler" discussions and computers and phones getting the latest news, efficiency can't help but go down. Maybe with people being off, some might even volunteer to help others to vote by providing transportation or taking food to poll workers or similar things.

We celebrate many other things that don't seem nearly as central to America as voting.

Many other countries vote on a Sunday. It seems to make sense.

Politicians - you can keep the prize, it was the obvious answer

This is asking government to spend money to something it will receive no return! ROI = 0$ for government, perhaps $1 Billion for the private individuals (if they were going to use the time productively, which some would not)

I think this is all moot because of the amazing frugality of vote-by-mail which saves time, money and has now been proven in Oregon and Washington over multiple elections

In my own polling place (northern Nevada), it was just the opposite. Early voting at the local library had long lines; at my polling place on election day there was one person ahead of me.

It's clear that the Republicans have an incentive to make voting more difficult in order to reduce the liberal turn out relative to the conservative. If you mandate nation wide early voting then how are Republican governors going to suppress the vote? That's why it would be tough to pass... but maybe it's sufficiently salient right now to get some traction.

Voting will almost always have an economic cost greater than its economic benefit. The benefit of voting for the voter is psychological.

That psychological benefit is increased by the experiences that Hamermesh seeks to bypass. Standing in line is a shared experience among the voters, which helps them all feel good about themselves.

Furthermore, society benefits by the voters' experience. The government created by the election is perceived to be legitimate partly due to the voters' shared experience of casting their votes. To the extent that the "burden" of voting is taken away, the fellow-feeling with other voters -- including those who voted differently -- is reduced. And without that fellow-feeling, the tendency to deride those other voters and deny legitimacy to the election and the elected government will increase. That in turn harms society by reducing voluntary compliance with laws and rules promulgated by that newly-elected government.