Another Look at an Unorthodox Hurricane-Prevention Idea 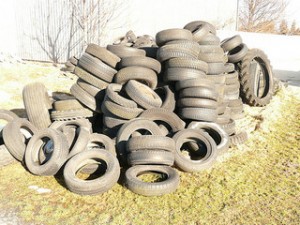 Very interesting backgrounder on Stephen Salter, the British scientist who, in the course of trying to turn ocean waves into electric power, discovered a potential way to prevent, or at least limit, the impact of hurricanes:

Devastating tropical storms of the kind that battered the U.S. last week could be weakened and rendered less deadly using a simple and cheap technology based on a surprising component – old car tyres.

One of Britain’s leading marine engineers, Stephen Salter, emeritus professor of engineering design at Edinburgh university and a global pioneer of wave power research, has patented with Microsoft billionaires Bill Gates and Nathan Myhrvold the idea of using thousands of tyres lashed together to support giant plastic tubes which extend 100m deep into the ocean.

Wave action on the ocean surface would force warm surface water down into the deeper ocean. If non-return valves were used, he says, the result would be to mix the waters and cool the surface temperature of the ocean to under 26.5C, the critical temperature at which hurricanes form.

How does it work? Imagine one of these skirted inner tubes— a giant, funky, man- made jellyfish— floating in the ocean. As a warm wave splashes over the top, the water level inside the ring rises until it is higher than the surrounding ocean. “When you have water elevated above the surface in a tube like that,” Nathan [Myhrvold] explains, “it’s called ‘hydraulic head.’”

Hydraulic head is a force, created by the energy put into the waves by wind. This force would push the warm surface water down into the long plastic cylinder, ultimately flushing it out at the bottom, far beneath the surface. As long as the waves keep coming — and they always do — the hydraulic head’s force would keep pushing surface water into the cooler depths, which inevitably lowers the ocean’s surface temperature. The process is low-impact, non- polluting, and slow: a molecule of warm surface water would take about three hours to be flushed out the bottom of the plastic cylinder.

Now imagine deploying these floats en masse in the patches of ocean where hurricanes grow. Nathan envisions “a picket fence” of them between Cuba and the Yucatán and another skein off the southeastern seaboard of the United States. They’d also be valuable in the South China Sea and in the Coral Sea off the coast of Australia. How many would be needed? Depending on their size, a few thousand floats might be able to stop hurricanes in the Caribbean and the Gulf of Mexico.