How to Maximize Your Halloween Candy Haul (Ep. 99) 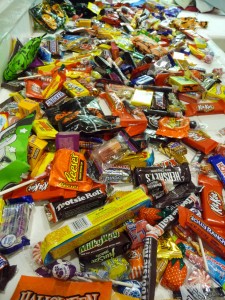 A few weeks ago, we got an e-mail from a reader Vishal Dosanjh, who lives in St. Louis:

My daughter asked me this morning why the fancy neighborhoods are the best places to go trick-or-treating. It puzzled me for a moment and then realized it was an economic question. I gave her an answer about disposable income and societal expectations. Anyway I thought it might be up your alley, and I wonder if it’s even true. Do wealthy neighborhoods/people actually give out better candy? She’s 8 by the way.

We set out to answer Vishal’s question in our latest Freakonomics Radio on Marketplace podcast. It’s called “How to Maximize Your Halloween Candy Haul.” (You can download/subscribe at iTunes, get the RSS feed, listen via the media player above, or read the transcript here.)
After speaking to Vishal and his daughter, Sophia, we learned that their neighborhood isn’t very good for trick-or-treating: too many houses don’t participate and Vishal is worried about safety. So they wanted to find another St. Louis neighborhood that would be better.
Enter the economists.
In this episode, you’ll hear from John List, the University of Chicago economist who has been featured here many times (and in SuperFreakonomics), often for his excellent research into charitable giving.
You’ll also hear from Stan Humphries, chief economist at Zillow, the real-estate data empire. Zillow has built a trick-or-treating index that incorporates home value, housing density, walkability, and safety.
Unfortunately, that index did not include St. Louis — but Zillow was kind enough to run the numbers there for Vishal and Sophia, and came up with just the right neighborhood for their candy-hunting.
Hopefully we will let you know sometime soon how Sophia fared.