From a reader in Annandale, Va., named Christopher Galen, who earlier sent in his daughter’s third-grade economics quiz (never too young to start!), comes this pricing quirk: 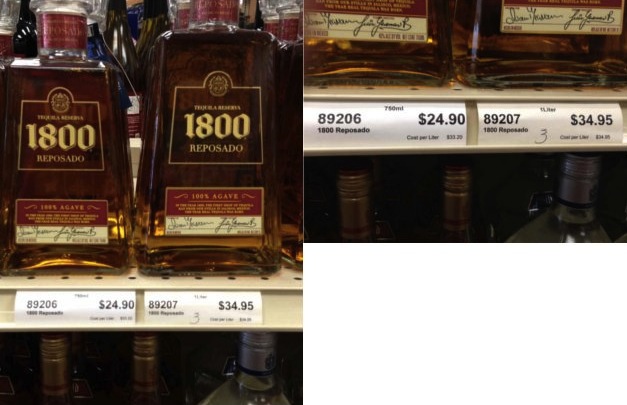 That’s right: the cost per unit is cheaper on the smaller version, which isn’t the kind of pricing we’re accustomed to in this supersize-me era. (For an interesting related read, see “Does Food Marketing Need to Make Us Fat?” and a Forbes summary of same.) As Christopher writes:

I’m passing along a photo I took Friday at one of the state-run ABC liquor stores in Fairfax, Va. … Neither [bottle] was on sale, and it contrasts with most other liquor offerings, where larger product offerings tend to have a lower unit cost.

Which led me to wonder — and no, I had not done any in-store sampling — is this simply the counterintuitive marketing strategy of a state-run enterprise? Is the store trying to discourage excessive alcohol consumption by making smaller product sizes less expensive?

Is the store counting on the fact that most tequila patrons may not be able to focus on the fine print?

All fine questions. But I fear — as with many pricing anomalies we’ve seen on this blog — there may well be less strategy involved than we think, and the quirk may be simply due to human (or computer) error.

While we’re on the subject of creative pricing, let me pass along a photo I took a summer or two ago at a gas station very near Fenway Park in Boston, where the Red Sox play: 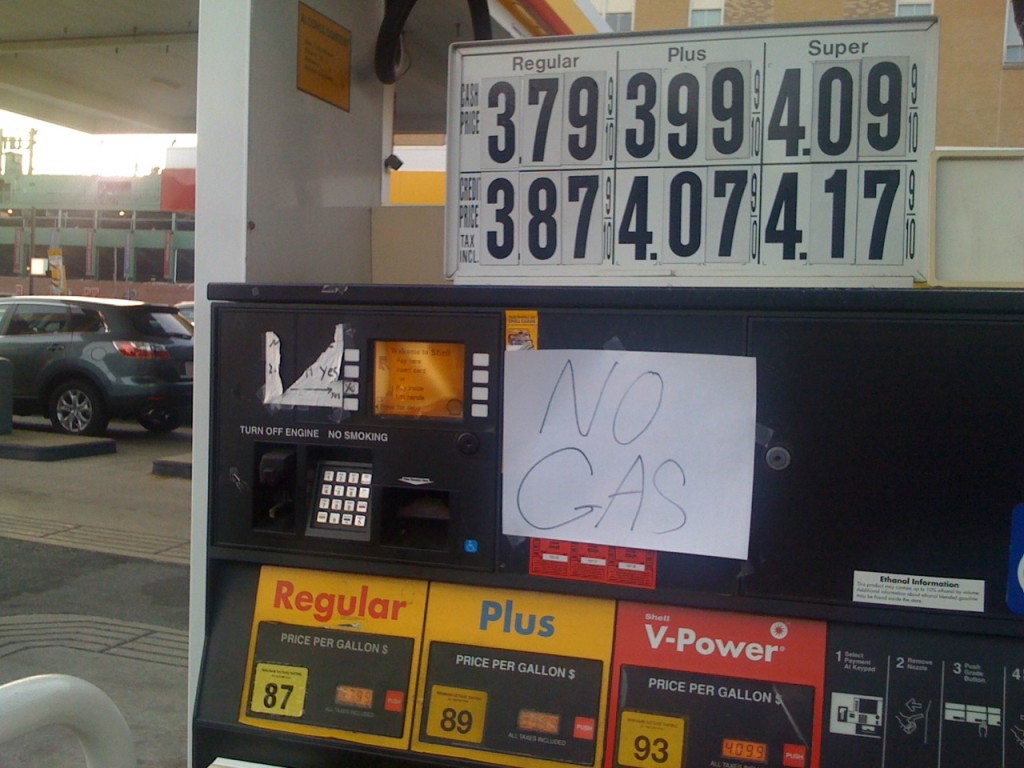 Hardly. The occasion was nothing more dramatic than a Red Sox home game. The station’s real estate is apparently more valuable for parking than for selling gas: 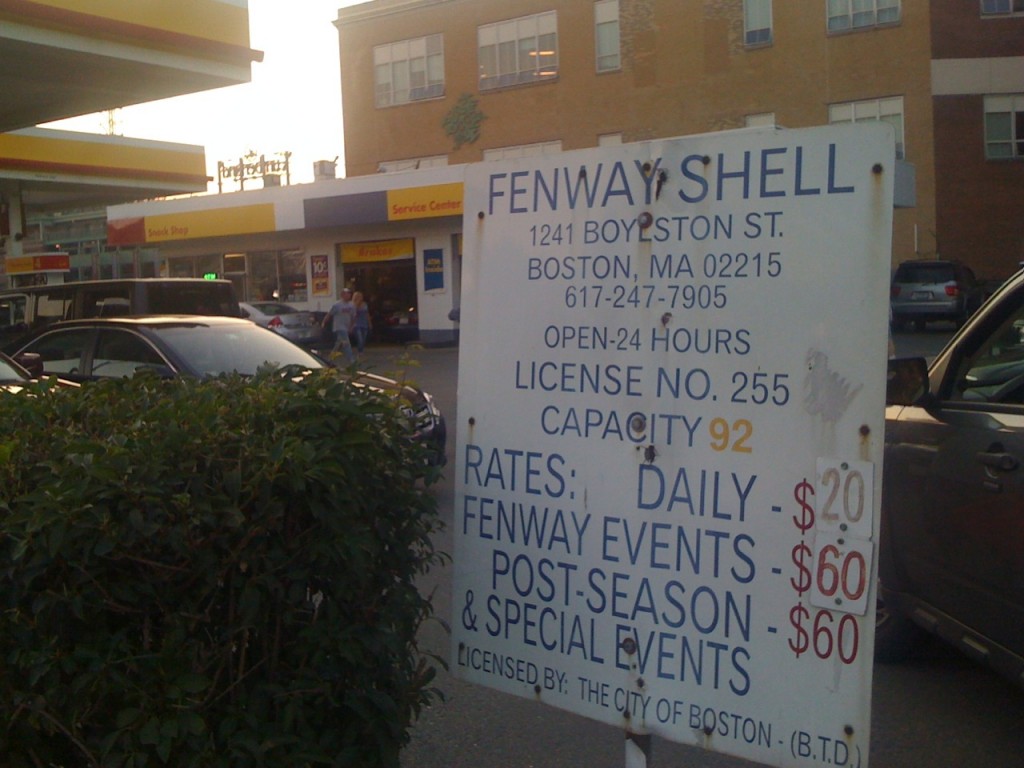 Maybe the idea that larger sizes have lower per-unit costs has become so ingrained in the consumer's mind that it's become an automatic assumption that sellers can take advantage of.

Target does this all of the time. The Consumerist blog has lots of pictures where Target sells a 2 pack of toothpaste for more than the price of 2 tubes, etc. Calculating unit price at Target is one of my least favorite activities and keeps me from shopping there. Presumably they get a lot of people this way, though.

I used to live next to that gas station. They are remarkably efficient at jamming cars into the lot. I figured they fit about 75 cars into the lot at $50/car. There's no way they could make that kind of money selling gas in an area that sees little evening traffic after the game has started.

I'd like to see how bad the Sox have to become in order for them to decide to start selling gas again. Demand for games is already dropping and this station and the one across the street have lowered their prices.

I've read that many gas stations actually don't make much profit on the gas they sell and mostly rely on items sold in the attached stores.

Sometimes liquor stores can get better pricing on select sizes / liquours based on the distributions need to move product and the quantity bought. A friend who runs a liquor store has sold 1.75s for less than 1 liter based on a sale price he received and needed to move a lot of inventory

I can't make out the numbers, can someone put them in the comments?

I drink a fair amount of Ocean Spray Cranberry juice. Almost always, I skip the more convenient larger bottle (with a handle) because it is more expensive per ounce (around here in CO) than the smaller bottle. I have no idea why this is so.

I used to live near that gas station too. The parking became much more economical when it was late in the season and the Red Sox had no chance to make it to the World Series.

The reason given by shops is simple: logistics. The one litre carton is most popular, and sells much higher volumes. Thus the cost to handle it is lower.

That's not the real reason, of course. The real reason is that people who buy largest cartons are prepared to pay slightly more. They may not care, or they may not think and compare the prices at all, just assuming that largest carton is cheaper per unit. It isn't. The unit price is clearly marked at the stickers on shelves (as required by law).

The store pays more for the bottle it buys and sells less of...and a backroom price computer is involved somewhere here. Also, price/quantity is often a secondary consideration when making a purchase, especially when it's cheap.

As in smaller is better. That seems to be somewhat true. I have noticed a trend w certain books. Around 137 pages should do it. An objective...not including footnotes of course. Now w dogs... not necessarily true. They breed dogs small. Charge for the small size and things can go wrong like poor bladder control. Tampering w nature does produce unanticipated effects. Now if you could predict them in advance? That would be an achievement.

Also, isn't the price based upon what they paid for it, so the price for the bottles may have changed in between supply runs (perhaps the larger ones are sold less quickly).

I would be surprised if any grocery store had cost-based pricing any more. The price is set to something that customers are willing to pay. Making the sale price be based on what the shop paid for it is not really optimising their business.

Some factors to account for are
- competition (if you have real competition, you probably have lower margins, unless you can set up a cartel, which is illegal in Western countries)
- the purchasing power of client base (richer clients are less sensitive to prices; people in dire straits will look at the price of milk, and for others it's irrelevant)
- what other things you can sell (you might want to sell milk at a loss of a few cents, in order to attract customers that also make purchases for something that has a high sales margin)

I have noted a similar issue at burger king. 2 whopper jrs are larger than one whopper, and yet are priced low enough that it ischeaper to buy 2 whopper jrs. Even more outlandish is their pricing of chicken tenders. Atl burger king, the 4 piece chicken tenders is 1.00, but the 8 piece varies location to location, but is always over $2, including as high as 2.89.