Why "Peak Farmland" Is Good News 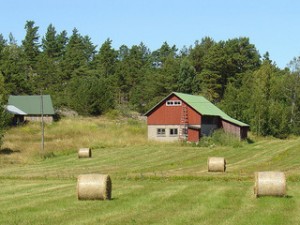 First there was “peak oil“; now there’s “peak farmland.” But it’s not what you think. Reuters reports that a group of scientists from the Program for the Human Environment at Rockefeller University just released a report detailing their findings:

The amount of land needed to grow crops worldwide is at a peak and an area more than twice the size of France can return to nature by 2060 due to rising yields and slower population growth, a group of experts said on Monday.

The report, conflicting with U.N. studies that say more cropland will be needed in coming decades to avert hunger and price spikes as the world population rises beyond 7 billion, said humanity had reached what it called “Peak Farmland.”

“Happily, the cause is not exhaustion of arable land, as many had feared, but rather moderation of population and tastes and ingenuity of farmers,” says Jesse Ausubel, the study’s lead author.

I wonder whether these calculations took enough notice of the increasing desire for eating meat. In most of the world, the first dietary goal of a poor person is to be sure that he can eat every day, and the second is to eat meat every day. As we have less absolute poverty, we have more meat consumption.

Following Ruddiman's hypothesis, this news would seem to auger hope for global cooling starting within this century.

William F Ruddiman is a a paleoclimatologist and Professor Emeritus at the University of Virginia. His hypothesis is that it is the human destruction of oxygen producing environments for agriculture (a la the Amazon deforestation, or the history of large scale burns by American Indians for prairie grazing grounds) which has delayed an overdue period of glaciation. Ruddiman's hypothesis suggests that an incipient ice age would have started thousands of years ago, but for man's increasing agricultural activity. Maybe this is a sign of a reverse in trend.

It's not peak farmland if the Greenies get their way. They want more "renewable" biofuels. More prairie sacrificed to plant corn for ethanol. More marshland plowed for surgarcane and switchgrass. More tropical forests cut down to plant for palm oil.

Took some digging but finally found the journal article that this appears to be a reference to. If I'm correct then this information is 11 years old. Why is it only coming to light now and is the information still useful?

I googled "Ausubel" and "Peak Farmland" and found this blog entry in my second search result.
http://dotearth.blogs.nytimes.com/2012/12/17/scientists-see-promise-for-people-and-nature-in-peak-farmland/

"The study, “Peak Farmland and the Prospects for Sparing Nature,” is by Ausubel, Iddo K. Wernick and Paul E. Waggoner and will be published next year as part of a special supplement to the journal Population and Development Review, published by the Population Council."

The as yet unpublished (in a journal) report can be found at
http://phe.rockefeller.edu/docs/PDR.SUPP%20Final%20Paper.pdf

If we dramatically increase the cost of fossil fuels, farming, which is VERY energy intensive, is likely to become less productive ( due to using less productive techniques ) result in a product that no one can afford. This puts the study results in peril.