The Opportunity Cost of Water 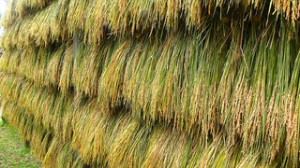 With the continuing drought in South Texas, the issue of how to allocate scarce water resources has flared up again. Rice farmers south of Austin want water from the Colorado River for their crops; yet the two storage lakes on the river, which provide most of the Austin area’s drinking water, are less than half full.  As one rice farmer told the the Austin American-Statesman: “Water availability should be based on sound hydrology and not on political pressure.” It should be based on neither—it should be based on economics—what is the opportunity cost of the water?  In particular, one might ask why the U.S. is growing rice at all.  It is hard to believe we have a comparative advantage in rice-growing and that it shouldn’t all be imported.  That’s especially true about rice grown in dry South Texas. We grow rice because of entrenched interests that obtained water rights many years ago.  The rice farmers get heavily subsidized water precisely because of the political pressure this man deplores—and they now want to compound the effects of bad policy.

There are many usage issues but as a long time fan of freakonomics and south Texan I would welcome a different approach to the drought issues in South Texas. I just don't think anything will happen until the day folks turn on the valve and nothing comes out and it takes guns to solve the issue. How would you go about introducing an economic solution. Let's start with who is the rightful owner of the water?

I'd try an auction.

oh, what will we do without our Texmati?!

I'd be happy to address the issue with sound hydrology. Sound hydrology says to quit growing rice in the desert or near-desert areas. That applies to both southern Texas and southern California.

Sure, but sound hydrology also suggests not building major urban areas in desert or near-desert areas, too. At least unless you can convince the people who move to them to do without bluegrass lawns, car washes, and toilets that use water.

I'm not so sure about that:

* An urban person probably doesn't flush his toilet more often than a rural one, so the location of the flush toilets doesn't affect how much water is used.

* An urban resident may not own a car at all, whereas rural ones commonly own at least one for every adult. When I grew up in the country, we had six vehicles for four drivers, and washed them all with a hose because the water-efficient car washes were miles away.

* There may not be a single blade of grass at an urban home. Neither my home nor my in-laws urban home has any grass, and I understand that having either no grass or a postage-stamp size patch of grass is pretty typical in urban areas. When I was growing up, we mowed two acres of grass, and ours was the smallest lot around.

If I needed to put a million people in a desert area, I'd choose a dense, walkable, urban city over a sprawling suburb or rural area. San Fransisco residents use only two-thirds the amount of water that the average American does, and less than half of some sprawling cities like the greater Dallas/Fort Worth area.

There are, by the way, good reasons for a country not to import all of a staple food like rice. If you import 100% of your staple foods, then your food supply is vulnerable to wars and other massive disruptions. It's not a good policy to have a food that many people eat every day to be dependent on the ability of the port workers and employers to get along, much less to be dependent on good political relationships between China and the U.S.

but is rice really an American staple food?
On average, one American consumes as much energy as;
2 Japanese
6 Mexicans
13 Chinese
31 Indians
128 Bangladeshis
307 Tanzanians
370 Ethiopians

I think that that is an even bigger problem.

The average American eats about 25 pounds of rice a year.

Currently less than four pounds of that is imported. This is probably a good thing, but there's no good reason to grow it in the driest parts of the country. Rice should be grown in wet places.

I have to go with the sound hydrology. This is yet another instance where economics just doesn't work (or perhaps it would be better to say that it's not allowed to work) because the legal/societal framework allows a small number of people to make large profits by dumping costs on the rest of us.

We could also turn the argument around, and ask why it's better to use scarce water supplies to foster the growth of large urban areas, rather than to grow food.

BTW The Colorado river you refer to is not THE Colorado River that flow to the Gulf of California, but just a tiny rivulet that is a local Austin issue.

BTW: A large portion of the real Colorado River is siphoned off by Denver, Colorado area via several trans-continental-divide tunnels. I would think this should be a national debate.

So, maybe water could be rationed like the Fair Tax rebate. (You know, where the basic cost of living is figured out, and the gov't pays you back that tax money?)

So why not figure out what the base amount of water is needed per household based on the number of occupants, figure out how much that will cost at the minimum (or give it away for "free"), and then let the free market decide on the rest of the water? Need water for crops? Let the cost go up or down depending on demand. Don't want to put in water reduction toilets and sinks in your business? No problem, you'll just be charged more for it.

So, kind of let water be sold like gasoline.

Why does Texas water belong to the people and oil and gas in Texas belong to the land owner?Lets also find out the amount of oil and gas needed per household based on the number of occupants and allocate that to each resident for free and pay for excess usage.

If you go to the trouble and expense (around $10K) to drill a well for your personal use, the water does belong to you.

Indeed a spaghetti of priorities...Disaster Status droughts in the Southern Cape area of South Africa posed exactly this challenge - do you allocate scarce water to Industry, Municipalities or Agriculture? But be carefull it's not the seemingly false economics of growing rice....it's growing jobs, rice is merely the vehicle. The question remained in our SCape case...who's job is the most important - the social impact of the decision is sometimes frightening. Furthermore , does the decision maker consider the pre-drought prudence of the sectoral water user? - eg uncontrolled topping up of swimming pools against dairy farmers "importing" water in the form of fodder from water rich areas thereby "subsidizing" other delinguent sectors.

I'd always known about "Texmati" rice, but it surprised me when I found that in the UK our favourite brand of Japanese sushi rice also came from Texas! Not a place I'd associate with paddy fields.

Yes this is true if domestic protection is in place. The issue here may be that water is not being priced correctly for commercial use. It is interesting to review the value added per litre of water by industry ( these stats are available across multiple industries in australia and i am sure in the US). Cotton and rice are water intensive for sure, interestingly red meat production also has a very high water intensity. The question of opportunity cost is a good one, but as stated, muddied by politics and long standing and potentially antiquated water allocations.