Everything You Need to Know About the Immaculate Reception

Tonight, at 8pm ET, the NFL Network is airing an hour-long documentary about the Immaculate Reception (video preview here), which took place 40 years ago this weekend.

If you are any kind of football fan, you know the Immaculate Reception as one of the unlikeliest and most dramatic moments in sports history. It is also loaded with myth and conspiracy theories, which makes it ripe for a documentary. The play remains such a big deal in Pittsburgh that the city’s airport features, right alongside a statue of a young George Washington, a statue of a young Franco Harris, mid-reception. It is the kind of monument that fathers show their sons when they take their football pilgrimages to Pittsburgh: 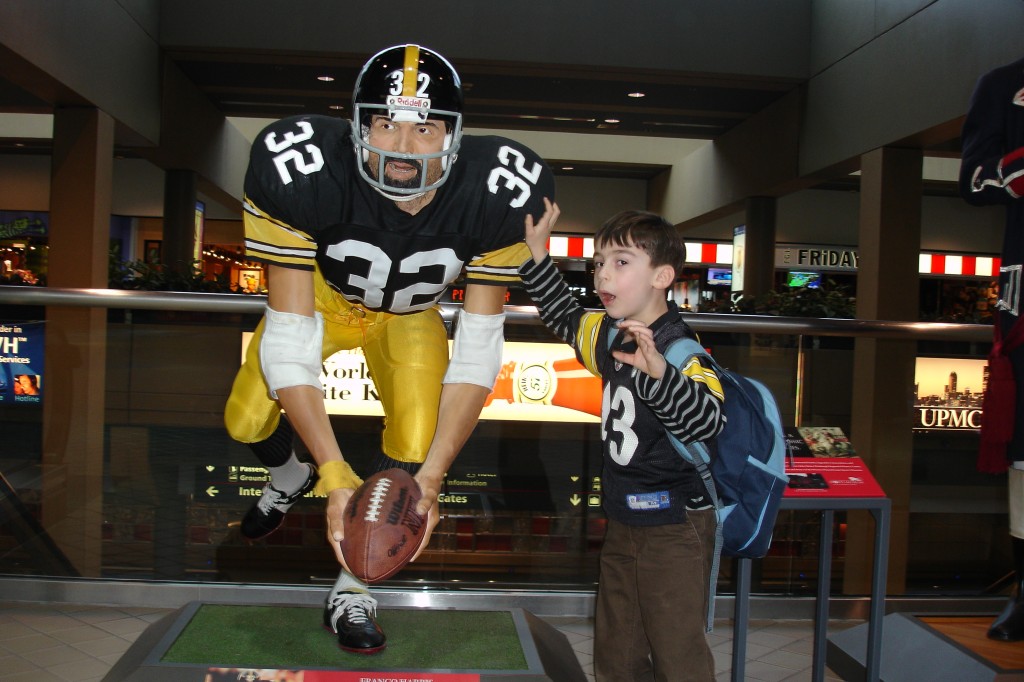 I had my own childhood obsession with the Steelers, and Harris, and the Immaculate Reception. Years later, I wrote a book on the topic (Confessions of a Hero-Worshiper) and spent some time in Pittsburgh getting to know the modern-day Harris, who to this day is a fascinating character.

One night, I attended a big benefit in honor of his 50th birthday. As I wrote in Confessions:

The dinner hour began with a viewing of the Immaculate Reception. The crowd turned as one to a pair of giant television screens up front. A chorus of gasps as Terry Bradshaw eluded his would-be sackers. A giant, pained grunt as Jack Tatum leveled Frenchy Fuqua. A breathy, expectant ooooh, the sound you let out approaching the top of a roller coaster, as the ball tumbled in slow-motion to the turf. And a wild round of whooping as Franco snatched the ball and, with fulgurant* speed, escorted it toward the end zone. As he crossed the goal line, the overdressed men and women banged their water glasses on the tables. They threw their arms heavenward to signal the touchdown. They turned to one another and grinned prideful grins, patrons then and still of a miracle.

The Immaculate Reception would be shown about forty-three times during the evening. Our reactions were always the same, and always perfectly timed. We knew every frame, every fateful twist of muscle and leather. It was the Zapruder film of sport, its outcome perfectly clear yet forever shrouded in mystery, its impact undiminished by one hundred viewings or even one million. It was a construction of beauty, thrill, and chance that no mortal artist could have created.

The NFL Network documentary is excellent (no surprise: they produce great stuff, although I am plainly biased). The list of featured guests is long and formidable, including Harris, Bradshaw, Fuqua, John Madden (the Raiders’ coach at the time), the hilarious and candid Rocky Bleier, longtime Steelers p.r. man Joe Gordon (a great man and a good friend), the excellent Peter King, former CIA director Michael Hayden, and yours truly. Watch it in good health and may all your receptions be immaculate.

*Ugh: what was I thinking — fulgurant?